The Watson Lake airport was established in the 1930s by Grant McConachie, in order to provide a fuel stop for mail flights going to Whitehorse. The community was originally located at Watson Lake, right by the airport, but in 1961 most of the buildings there were demolished or else moved down the road to Wye Lake. One of the relocated buildings was the old Air Force pilot barracks. It was used as a residence until 1988, then stood empty. The owners are aviation history buffs from Germany, and hated the idea of allowing a place like this to fall into disrepair, so they turned it into a sort of hostel, the Air Force Lodge.

It's not for everyone, but the sort of people who like that sort of thing should love it. Inside the front door, everyone takes off their shoes and there is a big kitchen table, tea and coffee, and lots of artifacts and old photos and posters. A vintage entertainment unit consists of a radio and a turntable in a big cabinet, which is also where the tea sachets are kept. The rooms are quite small, but they have a bed, a night table, a chair and a little triangle of wood across one corner, big enough for me to sit at with my laptop and my tea. We're just far enough from the cell tower that I don't have a signal, but if I go walk down the road a short way I do. There's even good wireless internet.

We went for a walk the next morning to check out the town. There were definitely worse motels in town. Most places were boarded up for the winter already, and some of the ones that were still operating also had a few boarded over windows. There's no snow yet, but it's about five degrees out. A couple of motorhomes and one hardy tent trailer still occupied the downtown RV park. 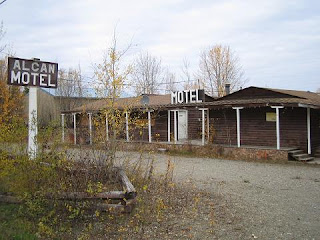 Tourist season on the Alaska Highway is definitely over, but the biggest tourist attraction in town is outdoors and accessible year round. Apparently in 1942 when the American Army was here, building the Alaska Highway, they had a signpost showing directions and distances to various places in the Yukon, plus New York, Chicago and Tokyo. A bulldozer had run over the sign, so an injured soldier on light duty was asked to repair it. He got permission to add his own hometown to the signpost, and then everyone wanted to do it. There are now over 50,000 signs on hundreds of signposts, known as the signpost forest. Over the years the point seems to have been lost, so the majority of the signs are just names of towns or "Bob was here" type markers with no distance marked on them and not oriented as signposts pointing the way to the place in question. Many of the signs are actual street signs, presumably stolen from the named towns all over the world, mostly the United States. There were so many that none of us found markers for our own home towns. I don't think I found any for anywhere I have lived.

When we returned to the hotel and mentioned that we had been to the Signpost Forest, the proprietor said, "Ah yes, the world's largest sanctioned public display of stolen goods." I'm glad I wasn't the only one unimpressed by that aspect of the display. Now that it was clear that the tourist attraction was not a sacred celebrated monument to the locals, I mentioned the fact that so few of them were actual signposts anymore. The idea has morphed from a directional marker to a "we were here" record. He nodded, "The early ones were done by pilots, so they were better."

Interesting. Sixty years ago perhaps only the pilots had the tools and expertise to determine the direction and bearing to a place, but these days anyone can plug it into a GPS or a website. Is the actual distance and direction to a place simply not as important to someone who can't just point their vehicle that way and go there? Even though I am not one of the pilots who opened the north, and won't pretend to have their skills, I am still proud of being in a place that was founded for and by pilots. I imagine it's the pride you feel being a farmer in Saskatchewan, a cattle rancher in Wyoming, or an engineer at the Panama Canal. My kind did this! I am one of this line! I also enjoy that I am sleeping in the building that housed air force pilots sixty-five years ago, even if it has been moved to a different lake and especially as it has been totally refurbished and is now well-insulated and heated.

The proprietor knows the owner of the hangar we want into, but we can't get a hold of him at his home, business or brother's number. We'll try again tomorrow.

The Air Force Lodge website says its the "Safest place in Watson Lake." Does it mean its safe from crime or wildlife... or something else?

Thanks for the tour!

As far as I can determine, the safety is from drunken brawls or disintegrating buildings. While there is wildlife in the area, it doesn't come into town.

It's a rough and ready Alaska Highway kind of town. I wouldn't be too surprised if a confused drunk person tried to break your hotel door in the middle of the night at the Belvedere.

What's the significance of the Alcan Motel?

I was taking pictures of the other motels in town, the ones I'm fortunate not to be staying at.

"It's a rough and ready Alaska Highway kind of town. I wouldn't be too surprised if a confused drunk person tried to break your hotel door in the middle of the night at the Belvedere."

I've stopped for fuel many times but never stayed in Watson. I believe your statement could apply to just about anywhere in the Yukon in my experience.

Some drunk tried to get in my room at 3 am in Whitehorse, even going so far as to demand I open the door. I said 'sure just let me get my shotgun first' and he left without another word. That was at 4th and Main downtown so if it could happen there it could easily happen anywhere else...

Have any pictures of the inside of the Air Force Lodge? Sounds like an interesting place, and a fun "encampment" for you and your co-workers.

I don't think I took any, Sarah. I'm definitely someone who takes notes when other people would be taking pictures. I didn't even take pictures of the Sign Post Forest.

Re: Alcan motel - the name Alcan must be related to the highway: From Wikkipedia:
The Alaska Highway (also known as the Alaskan Highway, Alaska-Canadian Highway, or ALCAN Highway) was constructed during World War II and connects the contiguous U.S. to Alaska through Canada...

When making reservations, not to be confused with:
http://www.alcanmotorinn.com/

The direction signs without direction or distance remind me of the rock piles in Hawaii.

Some bright light got the idea to make small piles of rocks that serve no purpose. They might have been a mimic of rock piles that have archeologica significance.

Now they are every where and are just vandalism and graffiti.

Verification word fautda.
"Then we came around the corner and saw the anticlimax as the tour guide gave a fautda."
Pronounced Faux tah dah.

Thanks - to us Alcan means an aluminium smelting works, now closed. It stood for Aluminium Can Company or some such.

We make small piles of rocks beside tracks in any place where there's nothing to stop you wandering off the track (ie where drainage ditches either side aren't required).
We used to be famous for fog.

Alcan is also a large Canadian aluminum company. They mine the bauxite in the Caribbean or somewhere and smelt it in Canada. It's an incredibly energy-intensive process and Canada has cheap hydroelectric power.

I just finished reading about people in Volcanoes National Park in Hawaii making piles of rocks for no reason, and researchers want them to stop it, because it disturbs information about the volcanoes.