I was expecting Whitehorse to be a one horse town. After all, it's not called "Whitehorses." But before we'd completed the cab ride into town we saw that this place was at least a kilohorse town. It has multilane paved roads with signs and traffic signals. We see some chain stores like Home Depot and Costco on the way in and then my co-worker cries, "There's a Starbucks!"

"There are two Starbucks," responds the cab driver, but don't think the corporate interests have taken over the town. It consists mainly of interesting wooden buildings two or three stories high. We later learn that the building code maximizes construction at four stories, so there are no skyscrapers, just medium density along astonishingly well-kept streets.

We checked into the hotel. It's obviously done up for the tourists, with moose and mounties and that sort of kitsch. You can fly direct to Whitehorse from Germany, and Whitehorse has taken pains to be the Canada the Germans expect. The elevator door is made up to look like the entrance to an old- time bank vault. Upstairs some of the corridors are very narrow, so although the hotel is in excellent repair, I think parts of it are actually quite old. We met up with our relief shift and all went out to eat in a building with an antique airline advertisement painted on the side. Menu choices included caribou stew, Musk ox stroganoff and grilled arctic char (a sort of fish). I had the musk ox, as I'd only tasted musk ox in jerky before. It was delicious, and very generous portions, too. The meals came with good salads, focaccia bread, and vegetables, all for $24, a good price for a meal of that quality and quantity anywhere in Canada. We all stuffed ourselves. 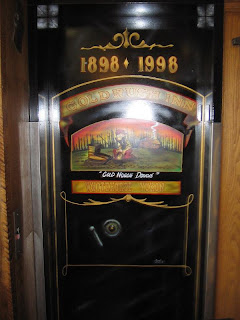 We walked around town some more. It's eminently walkable, plus dozens of people were on bikes and there were bike racks everywhere. There were a lot of stores selling things to tourists, but they tended more towards interesting well-crafted items specific to the place and not just plastic tourist junk. There were also a few very nice consignment clothing stores. Not thrift stores. That gave me pause. For stores like that to exist, there have to be women who live here who don't just wear parkas and sweaters in the winter and shorts in the summer. There have to be women here who make enough money to buy nice clothes and there have to be events and business calling for such clothes, and they have to live here long enough that the clothes go out of fashion and are replaced. I guess that was my first clue that people don't just pass through here, they come to stay.

That evening there was a midnight music festival and I went to that. I wasn't terribly impressed with the bands, but I got in free by asking the gate security people nicely, so I shouldn't dis their show. I just wanted to hang out. Wow, Whitehorse is diverse. Most northern towns just have native folk, lots of white men and a few white women. Whitehorse is every bit as diverse as Toronto, but more integrated. Caribbean accents were not what I was expecting at a midnight sun party.

When that wound down, I walked around taking pictures, giggling at myself that it was light enough to take outdoor pictures of historic buildings at 12:30 a.m. One of the rows of buildings I photographed turned out to be a trompe d'oeil mural in an alley. You know your town is clean when the tourists are photographing the dumpsters. 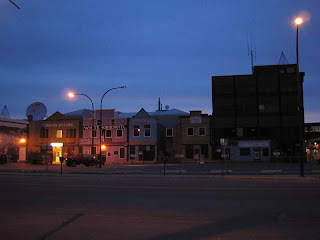 Despite the primping for the tourists, Whitehorse is genuine. It really is the beginning of any wilderness adventure you could want: dogsledding, horseback riding, the Chilkoot trail, river rafting, and mountain climbing all here. And it's not just any old trail or river: you'd be following the gold rush routes. That's why it's here. And ever since the gold rush people have come for one reason and stayed on. I really wished I didn't already have a ticket home. At least it's not until tomorrow afternoon so I have another half day to look around.

There is something magical about arctic (and I suppose antarctic) light. Some of the best pictures I've taken were 500nm from the north pole, after midnight in August.

I think it's a trompe l'oeil.

OMG...How great to hear of another Whitehorse...I grew up in Plymouth, MA and there is an area in Plymouth...it's like a small town called White Horse Beach. My mom summered there as a kid, my family has been there forever. You'll have to visit sometime: )

I suppose I do. It looks as if trompe l'oeil is preferred (but not exclusively) by French language sources, but the usage with d' is so common in other languages that trompe d'oeil and trompe l'oeil come out close to even in a googlefight.

So I guess I'm a hick. Maybe I'll spell/say it l'oeil next time. Or even figure out how to get my new keyboard to do l'œil. Hey, that wasn't hard. I got it first try. It's the same way I'd put an accent on the ô except using the e instead of the ^.

Just realized I should have put "" around the terms in the googlefight. So I don't have as much hick company as I thought. I promise to use trompe l'œil next time. Yep, I'm going to use that combo key every chance I get. Œ œ œ! Also Я Ы and Ф. Hmm, cool. It never occurred to me to use that key for anything other than specifying an accent. Blame Julien if my next post looks like a мëтäl бäńd name. From Hungary.

What kind of computer did you get?

It's a Toshiba Satellite. I saw the notebook advice, but this where I watch my movies and play games, too.

Is the Copper Kettle Saloon still in business in Whitehorse? Or Jake's Crystal Palace on the way in to town?

The bunny husband has one for his job and loves it. They gave him a laser printer which goes into his work truck. I like the screen that moves. But I am and always shall be a MAC person.
Glad you enjoyed Whitehorse. Robert Service's The Cremation of Sam Magee was one of the first things I ever did in speech class.

oops! I can c&p them. Some of the evil letters just appeared as "?" in the editing box, but are cool once I posted the comment.