I fuel after landing so the airplane is ready for the morning. The fuel pump is the standard self-serve type. There's a sturdy clip attached to a spring loaded retractable grounding wire. You pull the wire out of the reel far enough to clip onto a metal part of the airplane. I have a tab on the nose gear that fits it nicely. Then you can press Enter on the console to acknowledge that the airplane is grounded, and swipe the credit card. It asks for the grade of fuel you want: 1 for Avgas and 2 for Jet A, and then you tell it how many gallons you want. The game is to ask for just the right amount so you fill the airplane without authorizing more than you needed on the card. It usually takes a couple of minutes for the machine to receive an authorization, so while I'm waiting for that to come through I zero the counter, pull the hose out to the furthest tank and take off the first fuel cap. I would have checked the length of the hose before authorizing had there been any doubt it would reach, but I know I'm good here. The manager has painted arcs on the ground labelled OW and SP to show how far the hoses will reach for OverWing and Single Point fuelling. When the credit card has been authorized the pump turns on, and then all I have to do is lift the valve and then fuel will come out when I squeeze the trigger on the nozzle. Some people lift the valve lever while they are waiting for the authorization, but I have met pumps that won't work if you do that first, so I always wait, even though it may mean an extra trip back and forth from wing to box.

My favourite little touch at this fuel pump is the work gloves that have been provided. In cold weather it's nice not to have to hold the nozzle with your bare hands, and when retracting the hose or especially the possibly spiky wire grounding line, it's good to wear work gloves. The reason these are of note is that there are two left gloves. I'm betting the right handed owner had two pairs of work gloves for which the right glove was worn through, so bought a new pair for his own use and put the two lefties on the pump.

I'm done for the day now, so I go for a walk around town. The centre of town has an old historic courthouse building, still in use, with an equally historic jail, no longer used for that purpose, right on the front lawn. There are a number of historical markers on the courthouse lawn, commemorating Confederate bivouacs and veterans of every American war since. There are also a very large number of electrical plug-ins all over the courthouse lawn, all the way around. It's not a little cluster where one might have amplification for a summer band or the microphones of a rally. They're everywhere and in large numbers. It's as if they were expecting the confederate soldiers to return to camp on the lawn, only this time with RVs and tent trailers requiring electrial services. I really can't work it out, unless the courthouse lawn really is intended as a refugee camp of some sort. 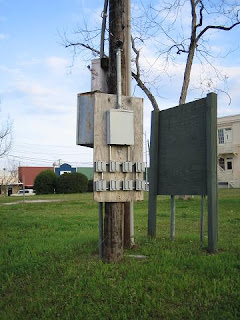 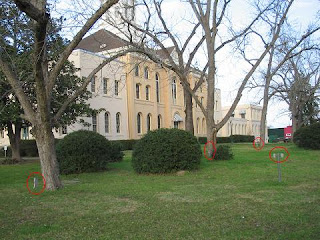 I pass around the courthouse to an old hotel across the street. The owner and some of the guests are sitting on the porch and I stop to chat. The owner has a son studying to be a pilot, so we talk about that for a while. They want to know what I think of Texas so far. I tell them some of the things that I've told you, and admit that I got beaten up pretty badly on my blog when I said Texas heath care seemed scary to me. It turns out that two of the guests are nurses from out of state, brought in because there's a shortage here. They laugh and tell me it scares lots of people, but it's all likely to change soon anyway. And then the Texans teach me two expressions that they say could come in handy if anyone gives me any trouble about what I put on my blog. 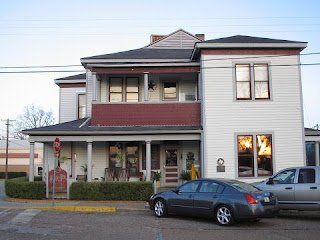 Oh and everyone really does know one another in small towns. Honestly, every person I met already knew every other person I mentioned, along with whom they owed money and where they got their truck. That doesn't seem possible, as the signs claimed a population of over eight thousand, and I didn't even know everyone in my highschool, but there you are.

Maybe the outlets are for Christmas lights and decorations. Some places even have a Santa's work shop and a manger scene. Are the lighter colored parts of the grass related to the electric outlets?

Ditto on the Christmas lights idea. That was the first thing I thought of.

The courthouse lawn may well be a pre-prepared area for a tent- or trailer city intended to provide temporary housing in the event the town is damaged by a tornado or hurricane.

Recall what little was left of Greensburg, Kansas and Parkersburg, Iowa, after they were hit by EF5 tornadoes in 2007 and 2008 respectively.

Christmas lights or maybe a festival - lots of towns in this area have a festival in the spring or early fall. The vendor and food booths usually line the courthouse square and the outlets could be power for them.

I want to know what the two phrases were. :)

The temporary housing idea might be a good one. Remember that the area you are in was badly hit by Katrina and then helped to house a LOT of folks from Louisiana after the storm. I'd think that they would use somewhere other than the courthouse lawn for that.

More likely is the Christmas lights idea. Most towns in that area break out big displays. It's also possible that throughout the year they have other events, decorations that go in different places. Local codes probably prevent the use of extension cords so as the year progresses they use different sets of plugs for different displays. On the other hand, I'm making all of this up. It's possible that the Mayor's brother is an electrical contractor. :)

"Never forget, Texans, you gave us the Bush family?"

Or possibly it's the fairgrounds for that town? Would there be enough space for a tilt-a-whirl and maybe the birthday game? Takes me back to my youth for sure! mmm cotton candy.

Definitely not enough room for a fairgrounds. Too many trees, uneven ground, general slope, and not rutted with paths or patchy with replacement sod.

Of small towns: "A mouse can't sneeze without two cats saying 'bless you'."