Not Ready for Prime Time

It's time to get out of here and go home for a break. There's only one airline that flies here, the one whose pilots held me up last week because they couldn't get their clearance right. I think I didn't blog about that, so I'll just passive-aggressively mention it now. I won't hold it against them. I can't, if I want to get out of here. They are to be the first page of my ticket home.

I go to their website to find and book a flight. The dropdown lists for the TO and FROM boxes for the departure and destination cities are amusing. Instead of reading something like "Toronto (YYZ)", numerous entries read "CITYNAMES: YOP (YOP)", yes with the word CITYNAMES in there, like it failed a database lookup.

Fortunately I know the local identifiers pretty well. I feel like I've been everywhere this month, so I navigate the drop down, but when I ask for YYE-YYC it returns with NOT AVAILABLE in red. I try YYE-YEG and YYE-YVR, with the same result. It doesn't make it clear whether the flight is cancelled, full, or not operating on this weekday. I try Prince George and Grande Prairie and everywhere else I can think of that might have connecting airline service to "out of here." I can't find a route map on the website. I interviewed with this airline once, so I studied the route map once, but I only remember: convoluted. They operate some flights for Air Canada Jazz and as a result aren't allowed to compete on the same routes.

I pick up the phone and call reservations. They are busy the first time, but I get throught he second time and ask for a flight out of Fort Nelson. "Where do you want to go?" she asks. "Out," I say. "Anywhere but here." And this being the north, she understands. She finds me a flight to Fort St. John (YXJ), which only qualifies as better than here because it's served by Air Canada Jazz. The 193 mile, 50 minute flight is $214.20 with all taxes. Everything else is full already. I guess I'm not the only one who wants out.

On to Air Canada, whose site takes my information then goes away for a long time to think about it, but eventually sells me a ticket out of Fort St. John. It costs $750 for a one way ticket, but it's getting me home and I'm being reimbursed, so that is okay by me. Onto the credit card it goes. Now if my co-worker arrives on schedule tomorrow, I can go home the next day.

Oh and they seem to have a lack of policies: 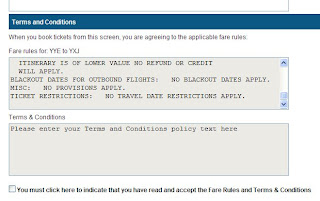 For a moment I thought that was an extreme version of the "click here to accept this policy" box, wanting the prospective passenger to type out the policy in the box, but then I realized they just forgot to replace boilerplate. Who doesn't check these things? Doesn't every store owner walk by the front door now and again to make sure it is inviting to customers?

Good times! How did I miss that opportunity? Maybe the flight was full. :P

hey there
can you tell us without compromising too much, on what rooster you are working? reading your blog, it seems you spend months at a time away from home? always wondered about that reading your blog :)
greetings from munich,germany.

These "click here to agree to ...." pages are so strange. Does anyone actually READ them?

I tried to the other night while opening a new bank account. The promised "10 minute" process became more like 40 minutes as I scanned and tried to make sense of the privacy agreement, the bank liability waiver statement, and I can't recall what else. Hundreds of lines of legal talk!

What we really need is an online www. "Call My Lawyer" .com page where we can get an instant legal opinion about clicking the AGREE button!

BTW Congratulations on winning a seat out of town in the Fort Nelson Great Escape contest!

Small airline websites can be hillarious. There's a little outfit near me that flies two routes daily. I considered booking a flight through their website, but couldn't find information on your maximum baggage allowance. (They fly 208B's.) So I thought I'd look around for an e-mail address or phone number or online response form I could use to get an answer.

The site politely tells you to send an old fashioned letter to a street address (in another state) if you have questions. They remind you that electronic communication is just too cold and impersonal. Yikes.

I used to work for the airline you are were talking about in your post. As you can see from your brief encounter with them, they are a total gong show. So disorganized, it's really sad.