My replacement pilot is here and my flight home is booked, so there is no impediment to my leaving. I even have breakfast with my co-worker, because he's not working today. There is a large area of freezing rain forecast, here and to the south. Oh oh. I hope I'm still leaving. Freezing rain is a reason to cancel or delay airline flights, and I have connections to make between non-partnered carriers, who don't know I'm coming. I'll have to collect my luggage, check in, and recheck my luggage. I hope I get there, but I don't want to go if the weather is unsafe. I hope the pilots at this little northern airline have the balls to cancel a flight in unfavourable weather.

The hotel van takes me to the airport. I check in at the desk in the little terminal and put my bag on the scale. As the agent goes to lift my bag off the scale I intervene to show her that the top handle is broken, so it has to be lifted from the side. I hear her conveying this information to the baggage handler. I bought that suitcase in Florida. It was cheap, but I was operating on the theory that cheap or expensive, this lifestyle was going to trash my suitcase, so I might as well not spend a lot of money on it. That and the mall by the hotel didn't have any stores above the level of Wal-Mart or Ross. The suitcase hasn't completely self-destructed yet. I'll get a new one soon. The CSA gives me my boarding pass and I go further into the terminal to wait.

It's a little bigger and swankier than the terminal at my old base in Weasel. For example the floor is level and the toilets have doors. But it's not big city. There are no news stands or TVs. There might have been a vending machine. The best part is a partly-completed thousand-piece jigsaw laid out on a table. I love this sort of thing about small airport terminals. I'm sure there some official reason why you couldn't have a jigsaw puzzle table in a departure lounge at l'Aéroport international Pierre-Elliott-Trudeau. Transmission of disease? Choking hazard? The airport authority cannot be responsible for deciding whether the jigsaw should be of kittens chasing string or of balloons floating over the countryside? A jigsaw puzzle has no linguistic or age barriers and it doesn't matter if you come in or leave on the middle of it. One person an work on it or several, with any level of cooperation. And it stimulates your brain, instead of deadening it like TV.

I'm the only one working on this jigsaw puzzle now. I'm looking for an orangish brown piece with really big square corners and a little teeny slightly left of centre tab, when someone comes up and asks about my checked baggage. It's the baggage handler. "I fixed your suitcase," he says proudly. He explains at length that he saw that it was broken and so he looked at the handle, and there was a metal part and he put a bolt through that, and so on. I thank him and he segues off into another story about how he fixed someone else's luggage. This seems to be his hobby. He's single-handedly making up for all the bags that all the other baggage handlers in the world have broken. I'm sure this violates some regulation, as does what I suspect he may have consumed before work. Or maybe he's always this garrulous. I thank him again and go back to the puzzle. 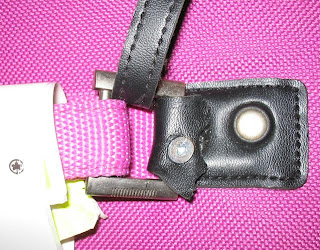 After I get lots of orangish-brown pieces connected, the flight is called. There's no security. I'm in the north. I just pick up my carry on and board the airplane. I've interviewed with this carrier. As look at the airplane I wonder what I was thinking. I don't want to work here. I feel sorry for the pilots. I watch them and hope I don't appear as transparently self-important as I go about my duties. I catch myself looking at the pilots' faces to see if I know them from somewhere. They're younger than me, so I probably don't. I don't want to fly this airplane. I want to fly better ones, skipping this stage. That's not really the way it works, Aviatrix.

They play a recorded preflight safety briefing. I listen to the recording, stow my carry-on and read the evacuation procedures like I mean it. As they start the engines I realize I've made a rookie mistake. There was no assigned seating and I just sat in the first available seat. Experienced passengers move to the back of a turboprop like this, away from the noise. I have earplugs in my flight bag, so I use those.

During the flight I'm watching to see if we're icing. We're not. We're flying between layers. The FO is reading a sheaf of something that doesn't look like approach plates or a checklist. Company memos, probably, or maybe his cheat sheet notes. (When you're new you make yourself a cheatsheat of runway numbers, nav aids, frequencies and other things that you'd have to look up in a variety of places. Tip: laminate your cheatsheet so it looks like a regular checklist). The heater in this airplane works well. Bleed air is a wonderful thing.

My first connection connects and I entrust my safety to another set of strangers. For some reason today I'm more conscious than usual that all pilots are people like me. We make stupid mistakes, get lazy, tired, or sick. And we all want to get home safely. Which I do.

Funny thing about that. I'm more wary of airline travel now than I was before I learned how to do it myself. When you're ignorant you listen to the arcane babble and are impressed. When you know what's going on you think, "umm that's not the proper time for him to say that! What's going on?"

"When you know what's going on ...." Seconded! I was once on a Canadian Airlines Dash 8 flying out of Calgary for Peace River. As we began the takeoff roll it felt and sounded as if one of the engines was not producing it's regular thrust. The aircraft kept speeding up but would surge and buck while pulling to the right. After about 5 cycles of this surging and just prior to takeoff speed, the captain pulled the throttles and taxied back. Claimed there was another aircraft in the way. I assumed we would be heading for the gate when he again took to the runway.

This is when you look deep into the eyes of the FA and see if there is even a glint of fear. She was stone cold. The aircraft then took off uneventfully. Would "I" have proceded under such circumstanceS? I wonder. We did make it just fine. Gotta love those Dash 8's!

I when to university with about 40% of the incoming young airline pilots. 'Nough said, I think.

That was yye. The BE02 is actually a lot of fun. Just the company isn't.

Everyone who hasn't been there thinks this is a bizarre creepy off-the-wall comment. But you, Anonymous of 6:06 p.m., have clearly been there.