The car is damaged beyond economic repair, which means will now be auctioned for recycling. If it were an airplane they'd tow it into a hangar, and it would be flying again in a few weeks. 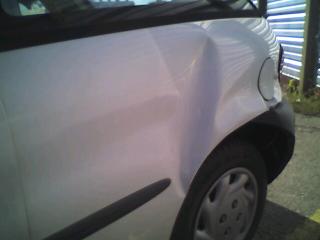 This is the first vehicle of any kind that has been destroyed while I was in it, but some of the airplanes I have flown have been later destroyed under the command of other pilots. It's an odd feeling. I know it doesn't go away. I once helped an 84-year-old pilot look up what had happened to the airplanes he had commanded in the 1940s and he had the same disappointment to discover that once faithful ship was now probably pop cans or siding. You have proof of your connection to the airplane, inked in your logbook, but the airplane no longer exists.

I can think of three aircraft from my logbooks that have been destroyed, one due to loss of situational awareness during an approach on a rainy night, one that had been loaded beyond its centre of gravity limits with marijuana, and one that was involved in a midair collision. They, like my car, were mostly just metal and plastic. The human beings inside were flesh and bone, but I didn't know them, hadn't become familiar with their workings, had never written their names in my logbook. This post isn't about them.

One of the four planes I did my PPL training in was C-GIKO, a 180hp Cessna 172. It was damaged beyond repair after nosing over during a precautionary landing in Virginia field (NTSB report) in March 2003. Everyone walked away, fortunately, but it was still a sobering experience seeing the wreckage: the club bought it from the insurance company and brought it back to Canada on a flatbed truck. It sat at the back of the maintenance hangar for a long time.

Seeing as that was just about planes, it was really sad.

I had a trial flying lesson in a PA-28 once, and a week later the aircraft got stuck in a tree. The pilot and student had to climb down the tree to get to safety.

If you need a hand in tracing an aircraft then give us a shout. I have a database with lot of details in it called Aerodata

Your wrote off your car???
I'm glad you are alright, but does this mean that I get my airplane back now? :)
Did it get thrown from the rear windshield? I hope it is ok as well.