Hotspots in the Sky

I'm working in a little corner of the sky that includes the top edge of a cylinder of class D airspace that is monitored by a flight service specialist, a slice of class C terminal airspace, and the edge of an area of uncontrolled airspace with its own air-to-air frequency for the low-level local traffic. I checked in with the FSS and they handled me for a while and then decided that I should talk to the terminal controller, to coordinate my movements with inbound IFR traffic. I did so, and tried to monitor both frequencies for a while, but it was an overlapping cacophony of sound. Even turning down the volume for radio tuned to the second frequency, I wasn't sure I wouldn't miss calls on the primary, so I told them I was going to let them go.

When the work was finished there, my next job was in military airspace. Prior negotiation had secured us permission to work in the airspace, so all I had to do was call their controller for a clearance. But just as I was about to do so, we discovered a problem. Data that was supposed to be on board in our computers was not. The data is required to do the work. We have a satellite link on board, which can be used to communicate with company, but only via short text messages, not special format data files. This wasn't an unprecedented situation. I found a community with a cellphone tower and dropped to a suitable altitude to orbit the tower until we had good bars on a cellphone and could set it up as a hotspot to log the laptop into it. The laptop wasn't charging properly and the battery was low, but there should have been enough juice to grab the data. Then I hear cursing from the back of the plane. Windows has decided that this is the right time to download and install updates. 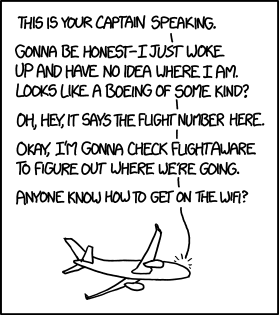 The town with the cellphone tower also has a little airport, with a little tiny terminal. I check runway length and procedures and put my wheels down. It's much easier to download data while on the ground. Also easier to visualize. I caught myself claiming we were "uploading" data, because it had to come up to get into the airplane.

I guess this was Windows 10? otherwise, shame on him for not turning off auto updates.

Windows 10 Pro can defer updates if you're sufficiently determined, but not Windows 10 Home. You have to dig around in the Local Group Policy editor; google can find the details if you need them.

I'm surprised that I haven't yet read about an inopportune Windows 10 update costing someone big money. Removing / hiding the upgrade deferral wasn't one of MS's better decisions.

I think it was a Microsoft Surface, but I can't guess what it was running.

"uploading". Thanks so much for the occasional update, this was great!

If it was one of the original Surfaces it would be Windows 8.1. Otherwise it is a Windows 10 machine.

Glad to see some updates from you! I've always enjoyed your writing. If you are ever up at CYEG and bored let me know I'd love to meet you.

Couldn't resist to add another comment... Not only are you uploading data when everyone else would be downloading, you're also giving a whole 'nother meaning to the great, great hype of cloud computing. Heh. - zb