This is from the Cheeseburger network's "demotivational posters," but it's the right rule for a pilot to remember. The exact wording on my poster would be "Always leave room for one more thing to go wrong." You can do a turn at low altitude close to the mountains, but can you do it at he same time as an engine failure or a bee sting? It sounds terribly negative, but constantly asking "what is the worst thing that could happen right now and how would I deal with it?" is a very positive way to fly. 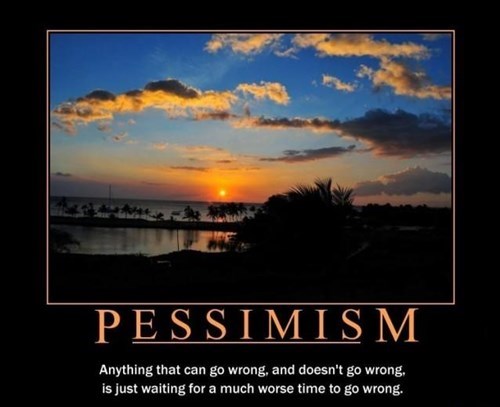 I think I already told you of the effect Baden-Powell's Scouting for Boys has had on my life, but it's my blog, so I'll tell it again. He urged boys to survey the situation around them at all times, think what emergency could arise, and be ready to deal with it in advance. Times have moved on since he wrote, so just as he only addressed "boys", one emergency he suggested was that of a runaway horse in a public place. The possibility of a horse bolting through the shopping mall or down my street was remote but so much more exciting than plausible emergencies that the idea launched me into a lifetime of imagining and preparing for infinitely unlikely but exciting emergencies. I honestly think I spent more time as a student pilot thinking about being struck by a piece of debris that fell off a passing airliner than say, a bird strike or an electrical failure.

Always leave room for one thing to go wrong is my own coinage, a realization I had so long ago that I don't remember what had happened to bring me to the conclusion. I think I was a student pilot so it might have been a combination of things that I now handle while eating lunch and boring my co-workers with repeated stories about my life, but at that time, on that day I realized that I didn't have the capacity to handle another problem. It goes with an astronaut saying I just learned, "In space there is no problem so bad you can't make it worse." That one is from my countryman and fellow pilot, Chris Hadfield.

"Always leave room for one thing to go wrong" - I like it!Get some tee-shirts made and call Sporty's!

I guess there are a various ways to say, "thou shalt not use up all of thy margin", with your "room for one more thing" fitting nicely in that category. My own formulation (not original with me but, alas, I can't recall whom to credit) is, "Always have a gold plated "out" in your back pocket." I found myself consciously making use of that on several stormy evenings and I'm sure you're not just being academic either. The title of your post speaks well to the mindset exemplified guidelines like these.

An old cop said once where I could hear it "Know when to drop the doughnut".

We reward people who persist in spite of sudden reversals; what we are really applauding is either dumb luck, or a really adroitly pulled-off "Plan Bravo".

In WWII Admiral Wm. "Bull" Halsey's luck ran out once in a typhoon, and it cost him three major ships, hundreds of lives, and left Gen McArthur's troops without vitally needed support. He'd been rewarded (hence, encouraged) for being gambler, and finally it wore out.

I also like Chris Hadfield's approach. I remember "What's the next thing that can kill me?".

My first flight instructor had a saying on his business card:
The Superior Pilot uses his Superior Wisdom to avoid situations that require his Superior Skill.

I can't hear "Staying Alive" without hearing the disco beat...