On the way back to Alberta we're crossing the northern Rockies again. I mention something to my crewmate that I forgot to point out the first time: Dawson Creek is a co-located waterdrome and land aerodrome. "You'll see it as we go by," I promise him. "It looks like the fin on a diplodocus."

I try to explain. "The land runway is just an ordinary straight strip of pavement, and the water runway is a parallel ditch, but in order to enable pilots to taxi off the water runway there are also a series of channels in the lagoon for parking."

"And that's a diplodocus?" He thinks it's some strange aviation term.

He Googles diplodocus on his phone. Yeah, you can totally get sufficient cell coverage in the mountains of northern BC to google random dinosaurs on your cellphone. And no, it's not illegal to use a cellphone in our airplane. It's illegal to use an electronic device when the pilot-in-command has ordered otherwise. And I haven't. He tells me that the diplodocus doesn't have a fin. He's right. It's just legs and neck and tail.

I admit, "I must have got my dinosaurs mixed up." I had a green plastic one when I was a kid. Later I google "dinosaur back fin sail" and google immediately shows me my dinosaur. It's a dimetrodon. 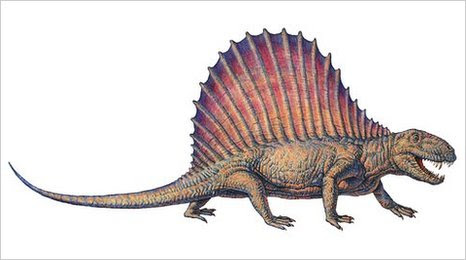 And you have to admit the lagoons at Dawson Creek look just like its fin.


By the way, it's Google's fault I don't post so much anymore. I have a quick bookmark that takes me straight to the page that allows me to compose a blog entry, and when I have something to say, I click that button and write at least a draft, before I forget what I was going on about. But over the past few years Google has bought Blogger and other things that I have passwords to, associated variously with my work identity, my personal identity or the identities associated with hobbies, including blogging. So now chances are that when I punch that button, I am already participating in the Google universe in another identity, so instead of bringing up a blank post for me to edit, it tries to get me to join Google Plus under whatever identity I'm currently using. I think pressuring me to join Google Plus is Google's default action when it can't serve me the page I've asked for. The really irritating part is that the page is does serve me doesn't even have the option to log out. So I just roll my eyes and close the tab, and the thought goes away.

And on the subject of logging in, I have disabled anonymous commenting, because the volume of comment spam is now so great that I rarely have an opportunity to read your real comments. Blogger does a pretty good job of filtering out and not posting the spam, but it comes to me for moderation and I have to delete it daily by the screenful. I imagine Google has forced you to be just as ubiquitously logged in, so I hope this won't be a problem for you.

I would have pegged you as someone who had her dinosaurs down cold. I'm not complaining, just observing.

I hear you on the google thing, I hate being always logged on as I just wonder how much data they're gathering in me...

I'm sure you've already thought of this but couldn't you keep a word doc or similar draft to note your thoughts then copy and paste when the time is right?

I do enjoy your regular randomness (is that an oxymoron?) and would hate to think we are missing out courtesy of google!

Dave from the UK

I see a sailboat. But yes, I share your confusion on dinosaur naming. Ever since the "brontosaurus" was declared non-existent in favor of the apatosaur, I've been so confused.

Dinosaurs were "Thin at one end, much much thicker in the middle, and then thin again at the far end." -- Anne Elk

As soon as dinosaurs changed from scales to feathers, I was totally lost :)

I use Evernote (for pretty much everything). So I have a quick access button pretty much anywhere that lets me quick-scribble a note and come back to it later. May be worth a look.

Don't worry. Dimetrodon preceded the dinosaurs by about 60 million years and had characteristics reminiscent of, but probably not phylogenetically linked to, mammals.