We're assigned to a short mission at a site not far from base. I'm flying with a new guy who doesn't have a company credit card yet. I don't have one either because I'm a contractor. (I'm still pretending I don't really work here, for some reason. I've so far even completely avoided getting airport ID, using a loophole that allows transient pilots to just show licences. "Just a contractor, here's my pilot's licence," I say to the airport security, who have now stopped asking because I've been here so long they all recognize me and know I belong in, by, or under this company's aircraft). "There's a chance we'll run long and need to refuel before we come back," I say. I'm guessing from his age that the price of a fill-up would push the limit on his personal credit card. My wallet is in my main flight bag, but we were training yesterday so the seat where I usually keep the flight bag had to be cleared out. Instead I have the essentials for one flight crammed into my pockets. I add the wallet just in case, and we take off.

While we're up, near a lake, ATC points out unidentified traffic at five o' clock, after a bit of twisting around I spot and report a yellow and red biplane. After a pause Centre asks me if it might be a water bomber. I look again. Yep. It's a CL-215 in federal colours. I thought it was closer and thus smaller than it is, and that the little sponson was the end of a second wing. I score a D in airplane identification. I swear if you repainted mine when I was at lunch I wouldn't be able to recognize it. The water bomber passes by. I wonder why ATC knew it was there but didn't have it tagged up. Perhaps its pilot called in on a different frequency right after ATC gave me the point out. 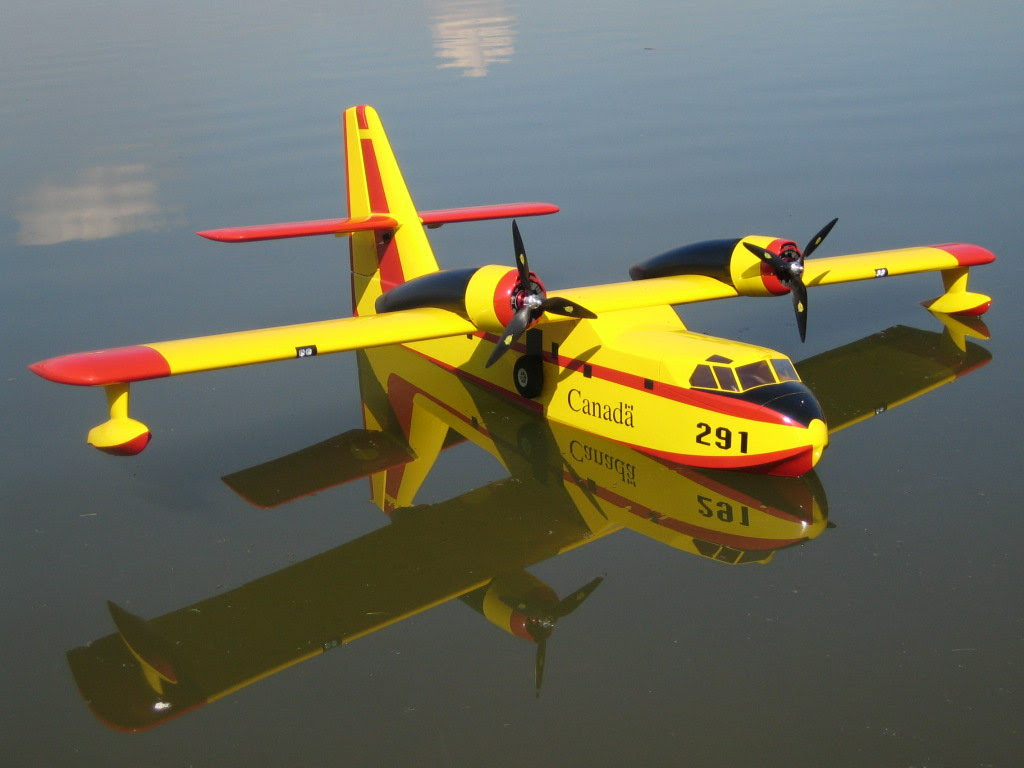 We're in uncontrolled airspace, so technically no one needs to call ATC while we're VFR, but we, and presumably the fire-fighters, have taken advantage of the safety afforded by VFR flight following. It doesn't guarantee they'll see or have opportunity to tell us about all collision threats, but it's a lot better than no help at all. Later pick up a controlled VFR clearance in order to climb above 12,500', where we're required to use ATC services. We're not far from a busy airport and there are a lot of jets coming in and out. We keep having to get out of their way. It's pretty inefficient so as I suspected could happen, we don't get all our work done with enough fuel to get home. We don't even get all our work done before we have to land to be within legal reserves. We land at a little GA airport, not the busy one. At the self-serve fuel pumps we're interrogated by a curious GA pilot on a bicycle. He wants to know about our airplane, how much fuel we burn in an hour and what we do. We answer a few questions and then direct him to the company website for the rest. The sky is waiting for us.

The engines are always a little reluctant to start when they're hot, but I coax them back to life and we return to the sky. After I call clear of the GA airport circuit and switch back to the centre frequency I can hear the controller giving me as a point out to another aircraft. The controller even guesses it's us, as he tells the other aircraft the traffic "is probably" our type, and once their conversation is over I come on frequency and confirm it all. We go back up to CVFR altitudes but conditions are no longer appropriate for our work so we turn home and tell ATC and company that we are doing so. ATC says "Roger" but his tone is more like, "Sure, whatever."

A message comes back from company, "Did you bring overnight gear?"

Sigh. I am so out of practice for this job. I didn't even bring a toothbrush. I almost didn't bring my wallet. I tell new guy to message back, something like, "No, but we can adapt." It costs a lot more to fly this thing to base than it does to get two toothbrushes and a hotel for the night. We'll get the work finished in the morning.

Gorgeous paint job and setting for the the CL215. It's for high visibility, but it's pretty too.

I have to admit that it's not my photo, Sarah. I didn't mean to represent it as such.

It's still a great picture. I wasn't sure if you took the pic or not, nothing in the post said you did. So you didn't represent.

Agree - nice picture , but - it's a model aircraft right ?

No idea. But what makes it look like a model to you? They really look like that.

Legend has it that, after a very long over-water rescue mission, one of my unit's Jolly Green (Sikorsky MH-53) helo's was slated to stop in Mexico for fuel. Papers were produced, fuel was transferred in "mui mas" quantities, but when time came to pay up, the vendor would not accept a letter from anyone in lieu of some form of payment.The mission commander was digging in his wallet for his military ID when the fuel vendor pointed and said "That's it".

For years that Lt Col had the framed bill from Shell Oil to his private credit card for thousands of liters of JP-4 for that Jolly.

I know this post is about two months old, but I've got $1.00 says that's a screenshot of the incredible CL215 model in X-Plane.