My fellow Canadian, Ryan North, writes a comic strip called Dinosaur Comics. It's about awesomeness, including friendship, philosophy, language, Batman, cephalopods and sometimes dinosaurs. I'm sure I've mentioned him before. I probably discussed his strip on how to land an airplane in an emergency. I followed its directions with no bad repercussions except that I was laughing while landing and that might have shaken the airplane a little. (I had to add some procedures that the comic left out, but it was only a six-panel comic: I didn't expect everything to be in there).

Years and years ago Ryan posted this comic which features a recipe, and I've gently nagged him for more recipes, so how delighted was I when his protagonist T-Rex decided to invent his own food? 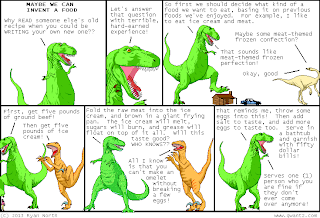 I set out at once to follow the instructions. Not being a fully-grown Tyrannosaurus Rex, and not having a giant enough frying pan, I divided the recipe by five, and also seeing as I live in modern times and not the late cretaceous period, I used the metric system.  First I assembled the raw ingredients. You see here 465g of ground beef, a couple of eggs, chocolate ice-cream and salt: all the ingredients mentioned in the comic.  T-Rex did not specify an ice cream flavour. I was going to use neapolitan, but I gave the final decision to my  photographer, who chose chocolate. There is certainly a lot of scope to vary this recipe by using different ice cream flavours. 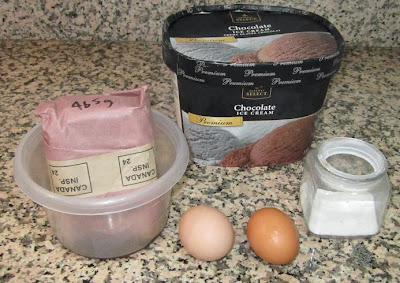 I weighed the ice cream, so as to get the same amount as the beef, per the instructions. You don't realize how much less denser ice cream is than beef until you weight out 465g of it. I heated the frying pan to about medium and added the beef. Astute readers may notice that I made a slight error here in following the instructions. They say to fold the raw beef into the ice cream and the picture depicts me folding the ice-cream into the raw beef. The difference is that had I followed the instructions exactly, no part of the beef would have browned in the pan the way some did before the ice-cream was folded in.

The frying pan was hot before I added the beef, but the addition of most of a litre of cold ice cream reversed that, so it took a few minutes for the pan to reheat. What I was essentially doing was slow-poaching ground beef in sweetened milk, in the presence of guar gum, cellulose gum, locust bean gum, polysorbate 80, mono- and diglycerides and carrageenan. (I'm not sure what "Premium" means in the context of ice cream, but it certainly isn't "contains only things you would put in ice cream if you made it yourself". Although seeing as I just put meat in ice cream, that wouldn't be a good criterion, generally).

Poaching meat generally makes the cooked product more tender and moist than frying, but sugar I thought might draw moisture out. There wasn't much point in speculating or researching on the effects of this combination, as I was about to find out for myself.

The third frying pan picture, showing the ice cream just starting to melt, is taken after two minutes of stirring. T-Rex's hypotheses regarding burning sugar and floating grease were not borne out by the evidence. As soon as the ice cream melted it mixed with any fat that came off my admittedly very lean beef.  As shown in the final photo of that sequence, after twenty-five minutes of stirring on medium heat, the mixture has reduced considerably and has the consistency of chili. I judged it ready for the next addition, "throw some eggs into this." 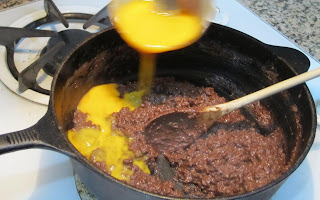 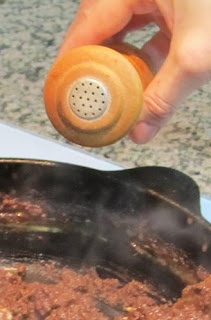 I cracked the eggs into a bowl and beat them slightly before adding. If you made the full recipe with five pounds of beef and five pounds of ice cream this probably wouldn't be necessary, but with the smaller proportions I needed finer quanta control than whole eggs allow.

Tasting the concoction revealed a need for very little salt, but given that the recipe gave me the latitude at this point to add ingredients to taste, I included some chili powder here, and of course more egg. At a point that my taste buds did not detect a need for more egg, I stirred it a few more times, ladled one helping into a dish, and added the garnish. T-Rex, specified fifty dollar bills, but as you recall I divided this recipe by five, hence the tens you see in the photo. The fifties would have added more colour, and also, being plastic, would have been easier to sterilize, I think. I washed the tens in hot water, but made them little plastic wrap condoms so they didn't come into contact with the food. I hope you can also see from the shower tile and porcelain curve in the background that the concoction is served in the bathtub. 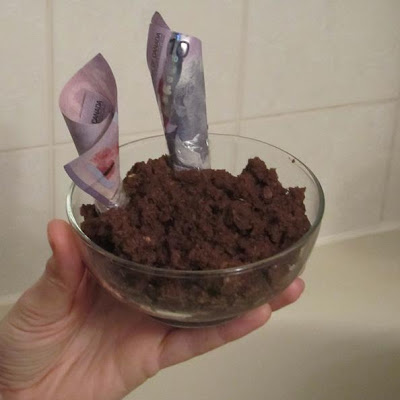 The dish was astonishingly edible, considering it was invented by a fictional dinosaur and deliberately concocted to be as ludicrous as possible. It's pretty sweet, and this is coming from someone who ate Nutella out of the jar with a spoon for lunch. I would recommend decreasing the ice cream-to-beef ratio to perhaps 1:2, add more chili powder and other spices at an earlier stage of cooking and, as I mentioned earlier, play with the ice cream flavour. My photographer had three helpings. He said it was better on toast, and suggested the wine pairing shown below. That is: something cheap, homemade, and plentiful. 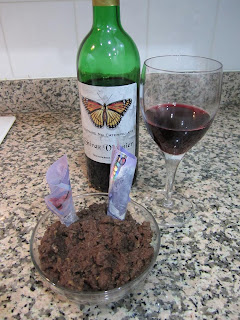 I wish to assure my regular readers that I am not converting this to a cooking blog, nor to an "Aviatrix does things the Internet tells her to" blog. I do intend to continue blogging about various aspects of being a commercial pilot in Canada. But you know, relying on a fictional dinosaur for consistency and recipes is not too out of line with the lifestyle.
Posted by Aviatrix at 00:00

I love that you did that.

You are quite mad. And pretty much the coolest girl in any given town.

I threw up a little just looking at that :(
you're insane! ;)

When I read that strip, I had a feeling that 'astonishingly edible' would be the verdict.

I was going to say, I'm glad I'm a vegetarian, so I don't even have to think that I might try this. Anonymous, Good luck with a vegan version!

You are a good person

I think I will try this with the modification recommended, and substituting with a flavor of ice cream that might go better with beef. There is a Marianne's (of Santa Cruz) Spicy Chocolate flavor that might work well. I might throw in a few lingonberries for color and flavour.

A vegan version would evade the fundamental disgustingness of folding raw beef into ice cream. You'd have to use soy beef, soymilk ice cream and some kind of vegan eggs, which could really be anything, seeing as they were in no means needed for the recipe. So you'd be making a soyfood fry-up. Might as well toss some firm tofu in tamari and cut out the xanthan gum and the middleman.

I think the cooler kinds of vegan cooking are the ones that mimic non-vegan dishes with fresh, real vegan ones.

I am currently helping rear my 11-month-old granddaughter, with my primary life aim being "teach her which rules to break," so that she can be a useful member of society. One of the difficulties is seeking out adequate adult female role models. You've just made that easier. Thanks.

I just want to say "The dish was astonishingly edible, considering it was invented by a fictional dinosaur and deliberately concocted to be as ludicrous as possible." is my new favorite sentence.

I think I feel a bit ill now.

It'd probably go down well with a Chianti, too.

Here I thought that the vegan version would be some chili powder sprinkled on a few fifty dollar bills...

You'd have to make sure they're the new fifties, Anonymous. There are animal-based binders in the old ones.

Can you provide a link to the emergency landing comic and/or blog post? I can't remember the comic and the post sounds interesting.

Oh My God. That is horrifying, both from the description and some of the images. And yet... the end product does look edible. Amazing. I hope you've shared the experience with Ryan North.

Yes please if someone has a link to the "airplane landing" strip please post it. I couldn't find it in the archives at Dinosaur Comics.

I'll third the request for the airplane landing strip.
I could do with giving my instructor a good laugh (Or a heart attack!)

Aviatrix + Dinosaur Comics is probably the greatest thing ever. The fact that you actually did this, and it worked, certainly brightened my day.

Hilarious, and thank you. On t he other side, I would not eat this if my very life depended upon it.

Seeing as poutine and burrata both made it across the border, through Seattle, and eventually even to Burning Man in the case of Midnight Poutine... I am looking warily over my shoulder to see if this T-Rix Lasagna is on its way down. Glad your post is still up: I started Dinosaur Comics months ago and am caught up to 2013. --Chris