I really really shouldn't laugh at this. I know people who have died in midair collisions, and aircraft separation is deadly serious business. While most of the math cycles in my brain are working out fuel consumption, most of my eyeball cycles are focused on not running into anyone. This joke is utterly predictable, and not even well done. But it's still hilarious. 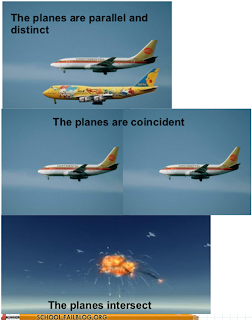 On the topic of loss of separation, a deer ran into my car the other night. I don't know if it ran away, limped away or died there, because I lost sight of it as soon as it stopped being in my headlights, and stopping on the highway didn't seem wise. For the record, when I saw it the deer was approaching from the right and slightly ahead, so in aviation terms it had the right of way, both because I had it on my right and I was presumably passing it. It failed, however to display any navigation lights or make calls to traffic. No humans were hurt and the car is driveable, plus I've picked up some extra work this week that will cover the deductible.

Love it!
Duly shared with the math teachers here!

Nice to remember the proud bird with the golden tail. Many many moons ago.
Glad your vehicle didn't suffer too much. Those darn deer need to remember to turn on their running lights after dark.

Deer are the second most lethal mammal in America (after hum as) due to traffic accidents. Collision evasion maneuvers are often precursors to departing the runways, er, road.

"I know people who have died in midair collisions"

Remember George Carlin? 'near miss?? It's a near hit! A collision is a near miss!! "Boom! look.. they nearly missed"'

I'm just catching up after a long time failing to keep up... and so in looking up I find it good to see you're still in the sky.