I forgot to show you this guy, hanging out on the airport road last summer. He was there all day, just enjoying the foliage that grows up where the trees have been cleared for roadmaking and mostly ignoring the traffic. We had to whistle and talk to him to get him to put his head up for the photo. 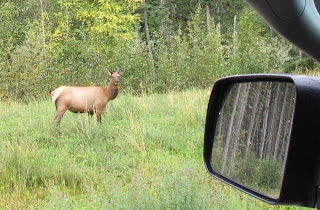 The telephone interview went okay. Now to see if they call me back with a groundschool date.

Technically there is no such thing as a brontosaurs, the animal you are referring to is the Apatosaurus ;) Just to be picky!

It's OK Rob. The brontosaurus theory, which is hers, that is to say, she owns... that is, the next thing someone's about to comment about is her theory. Which belongs to her. And is follows:

Best wishes on the prospective employment! May a course date come your way soon and, when it does, may the sim be kind to you :-)

Best of luck with prospective employment.

Question 1: You told 'em how you can fly planes in really straight lines, like in that cover letter you once wrote about, and they thought that was cool?

Question 2: The noises of the machine guns at the end of the Monty Python story were not produced a) by the guns you dreamed to be in the bulkhead of a plane and b) at the airport, because the elk didn't shut up?

Anyhow. Over here, fingers are crossed.

"Brontosauruses are thin at one end, much much thicker in the middle and thin at the far end again....