I mentioned the met station in Estevan. Once upon a time there was an FSS there, and a pilot could go up the stairs to get a weather briefing or look at weather charts, faxed from Edmonton, I think, and hand-coloured by the local briefers. Or you could phone the FSS directly to get the latest weather. You just had to be careful not to call them at the top of the hour, or else they would be outside taking the hourly weather observations, or busy coding the observation. About eight years ago they they separated the task of observer and briefer, moving the briefers into consolidated regional Flight Service Stations and leaving the lonely observers behind, in some cases literally building a solid wall across the door the pilots used to enter for briefings.

We first noticed the Nav Canada met observer when my passenger mistook him for a Transport Canada official--I guess he has a sharp eye for aviation functionaries. Late that day we spotted this device just outside the airport fence. 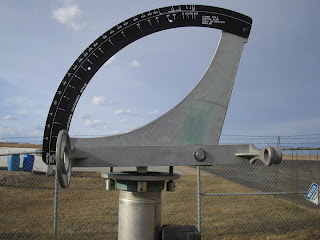 As you can see if you click and enlarge the photo, it consists of a ninety degree arc, fixed firmly to a vertical column and calibrated on a non-linear scale in "metres" and "coded vales." There is also a sight, pivoted so that it can swing through the arc. Its location, between the met office and the outdoor weather sensor array, plus the words Atmospheric Environment Service indicated that it had something to do with making weather observations, but what? The azimuth angle between the observer and the base of a randomly selected cloud is not a useful datum for a pilot, or for anything meteorological that I can imagine. I snapped a picture and saved it until now.

The observers at the airport where I learned to fly had a laser ceilometer, a device that bounces a short pulse of light off the cloud base and times its return. Speed times time equals distance, so you take the time it took to return and divide that by the speed of light and you have the distance the pulse travelled. Divide that by two (because it had to go there and back) and you have the height of the cloud above the emitter. I get a serious thrill out of the fact that a trivial calculation whose results I use daily involves the speed of light, so we must now pause for a big grin.

In mountainous areas, weather observers use the known height of nearby peaks to determine cloud heights by looking at where the cloud hits the mountains, but I hadn't until today given any thought to the pre-ceilometer technique in this notoriously non-mountainous province. (I made a two hour flight in Saskatchewan the other day and the elevation of the landing airport differed by one foot from my take-off point). The alidade and ceiling projector combination is the answer to the question I didn't think to ask.

The unfamiliar word alidade, describing the scale, looked eminently googleable so that's where I started. Technically the alidade is just the pointer with the sight, a part of many ancient and modern scientific instruments, but some whole instruments are called alidades by association. Fortunately for me this sort of alidade is one of the example pictures on Wikipedia, and links to the article on the ceiling projector with which it is used.

According to the Wikipedia article, the ceiling projector is a bright light that shines straight up at a known distance from and the same level as the alidade, and then the spot where the light reflects from the base of the cloud is observed with the alidade. The scale on the alidade is simply the solution to the resulting trigonometry problem. How beautiful is that? (If you won't at least pretend to appreciate the beauty of trigonometry you aren't allowed to read my blog anymore). 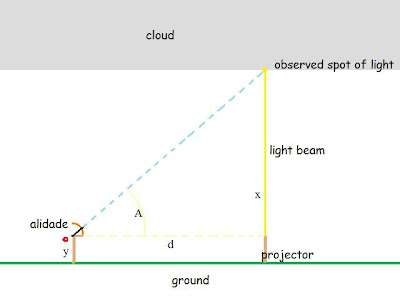 In my diagram, y is the height above ground of the alidade and the projector (relatively negligible for the ground-mounted instrument, but some of these are probably on rooftops), d is the distance between the alidade and projector, and A is the angle above horizontal of the observed light spot on the base of the cloud. You put your eye where the red dot is and raise the sight along the scale until the light spot lines up with both rings of the sight. The unknown x is the distance from the projector to the cloud base. Using trigonometric ratios, d tan A = x and then x + y gives you the cloud height above ground level. The scale is marked along the arc as the solution to the equation, instead of being in degrees, so the observer doesn't actually get the privilege of doing the math.

That's two ways to get the same information, one requiring knowledge of the speed of light and the ability to produce and monitor coherent nanosecond light pulses, and the other requiring only tools and skills known and available to ancients. If that's not the coolest thing you've seen all day then you are obligated to click on the comments and tell us all about your even cooler thing.

For a scientific experiment of a different kind, there's Boobquake, a US college student's response to an Iranian cleric's assertion that earthquakes are caused by by women dressing immodestly. I'll join the effort and show some cleavage on Monday, provided that it's not snowing.

There are two things about the scale that I really like a lot. Number one is that it goes all the way down to zero. Number two is that it stops at 6 km. We learn that pilots and tan (A) are very different: Pilots freak out when the ceiling is at the ground. tan (A) will freak out when the visibility is best.

I am happy to learn that the pilot who writes this blog appreciates the difference and still says that tan (A) is the coolest thing around.

The 'coded values' are in fact hundreds of feet.

When I stared at the picture of the instrument, I figured it had to do with something about finding cloud bases, and I guessed they sent a balloon up, and sighted the spot where it disappeared.

Now you can segue into an explanation of laser gyros!

I'm putting on a tank top on Monday and joining in Boobquake too.

You've got to throw in a puppy post now that you've talked about math. 8-)

mattheww50: Isn't that silly? I figured it out, but I felt obligated to describe what was in the photo.

dpierce: Pretty darn close. That would work if you were quick enough to spot it.

amulbunny: If there's a math/puppy meme I don't know it. Enlighten me. For what it's worth, there was a puppy in the earlier Estevan post, the one that came to the airport with the fueller. I just ordered a monokini (the American kind, that covers most of your boobs) online, but that will go to my home and won't be here until Monday, so I'll have to improvise.

Also, I apologize for all the missing words in posts lately. Firefox has some issue where it will zone out while I'm typing and just not record a bunch of keystrokes.

Helium balloons, as suggested by dpierce, used to be a common method of judging cloud height. A weight was used to standardize the gas volume, then the balloon ascent timed with a stopwatch. The alidade would only have worked with a balloon in zero wind.

The alidade math may be cool, but talking like a duck after a hit of helium was even cooler!

Today I saw Midori perform the Sibelius Violin Concerto with our local orchestra. She played with the flawlessness of long and virtuosic familiarity, but also with an emotional intensity and fluidity that made it sound almost improvisational. That might not have been an "even cooler thing," but I feel obligated to report a tie.

Of course you probably also use radar (both primary and secondary though I assume not a rad alt), GPS and DME in your daily life and they're somewhat dependent on the speed of light, too.

Love Boobquake - but how would you double blind that trial?

It's 10:30 am, but as I look over my list of things to do today, I'm going to predict that this is the coolest thing I'll encounter today. I'm wondering if anyone uses the lapse rate and temperature- dewpoint spread to estimate cloud bases, which I remember from ground school training (I'm paraphrasing from Jeppesen): If the surface temp is 80 deg F and the dewpoint is 62 deg, the spread is 18 deg. This difference, divided by the lapse rate of 4.5 deg (rate that temp approaches dewpoint), is the approximate height of the cloud base in thousands of feet (e.g., 18 / 4.5 = 4, or 4000 feet).

I live in southern New England, and they're predicting a high of 50 deg F tomorrow (how do they do that?), but I found a spaghetti-strap sun dress in my closet, so I'll plan to wear that. I may have to wear a heavy coat and flash periodically.

Sue: Yes they do use the lapse rate to predict cloud bases. I encountered that in Fort Nelson when the precision was vastly different for convective versus stratus cloud bases.

Aggh, ths stupid Firefox keeps timing out and not accepting what I I'm not going to take it anymore. That's Is anyone else having this?

The control for Boobquake would have to be International Burqa Day.

Was there actualy a vertical light positioned 1000ft away. Or maybe, I am guessing, a (45 degree) mirror 1000ft away, and the light slots into the holes on the Alidade, and shines horizontally at the mirror?

Ok, forget that, I can see thar the thing with holes is the sight! So, did you see the light?

I didn't know what after I had left the area, so I didn't know to look. There was an array of met instrumentation further into the field, so perhaps one was a light.

The "VERTICAL BEAM" and "300 m OR 1000 FOOT BASELINE" labels immediately indicated the thing's intended purpose to me.

Aviatrix - Went to Wikipedia to see if your idea of a monokini was the same as mine.

All I could think of was "how it would look with green hair and a blue face"...