Okay here we go. I'm driving back from the Sonic fast food restaurant with a cherry limeade, a chili cheesedog and an Oreo Blast, wondering what I've got myself in for. I can already see through the fast food plastic lid that the cherry limeade is predominately red, but has a suspiciously green blob at the top. It's kind of scary, but I said I would try this. 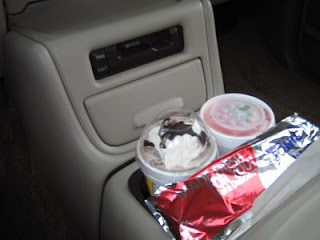 I pull into a parking spot at the FBO but see too late that it's marked with the name of a customer. I back out and park inelegantly in another spot. I carry everything into the FBO and let them know they can identify the vehicle to the next pilot as "the one that is parked badly." They assure me that no one in Texas knows how to park, so I'm fee to turn my attention to my meal. The cherry limeade comes in a styrofoam cup. Most beverages come in styrofoam here, even cold ones, which is rare in Canada. I think back maybe forty years ago when it was made with CFCs styrofoam was banned in Canada, and that even though it isn't anymore, consumer disdain prevents its widespread reintroduction. But I've had milkshakes and soft drinks served in expanded polystyrene here, as this one is. I take a sip. It's carbonated, tastes a bit like club soda. Not too sweet, maybe an almost salty taste. Definitely cherry flavouring. It's really good. And there's a lot of crushed ice. Darn, I should have got a larger one. When I get down to mostly ice, I open up the cup. I'm in for another surprise.

There's an actual quarter of a LIME in here. Real fruit. That's what the unsettling greenness was. The people at the FBO are watching my experiment and tell me it's made with Sprite. The sourness of the lime counteracts the sweetness of the Sprite in a very delicious way. I dig around in the ice a bit more and find a real maraschino cherry in there too. So that's a cherry limeade. If you get one, I recommend you open it up and squeeze the lime into the drink before drinking. This cost, by the way one dollar, and according to the cup it would be half price if I bought it between 2 and 4 p.m. 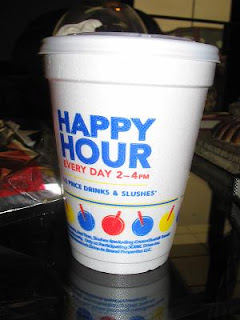 So the cherry limeade was a win. My reader cannot be blamed for the other stuff I bought, as I just went by the pictures on the menu. The chili cheesedog I'll simply describe as "not even close to looking like the picture." And I'll move on from there. The Oreo Blast was as I assumed a kind of McFlurry/DQ Blizzard equivalent, but it was kind of watery compared to either of those.

I chatted to the fine folk at the FBO while waiting for the weather to clear. One was an instructor student hoping for a chance to get up and practice airwork so she too was disappointed by the late appearance of the forecast clear weather. It finally arrived. I waited a bit longer for the weather at "home" to likewise clear, and I got back in time that the customer was never inconvenienced. Except in that they had to drive me to the airport and pick me up, but it was close.

Also: a reader e-mailed me today looking for help on a description and a source of detailed specifications for CL1B High approach lighting. If you know any more than "it's a centre line type with one Calvert bar" please e-mail me or leave a detailed comment.

We have Sonic here in Georgia too. I seldom, if ever, eat there, but I have trouble driving by one without hitting the drive-thru for my regular, a "Route 44" (44 ounce) diet limeade. It's one of the few diet drinks available in this world that doesn't taste like a diet drink. Excellent thirst-quencher!

I'm pretty sure they make their milkshakes the good way. Milk, ice cream, and flavoring. At least, they taste that way and they're not all fluffed up with air. Yummy.

I foud this by searching n "ICAO approach ligthting."

This was the only thing found that didnt' circularly refer to Wiki
http://www.airwaysmuseum.com/Calvert cross bar lighting.htm

Youre so good Id pay to read your stories... Writing such a witty and entertaining blog about a drink...great.

The Calvert bar pic URL posted makes no mention of the CL1B configuration. It's a multi-bar Calvert lighting system from 1951. We're looking for exactly what a CL1B is according to ICAO.

If you like root beer floats, you should try their "blended float." They take root beer and ice cream and whip it together like a milkshake but much better.