In the far north, before airplanes and telephones and television and treadmills, people developed some simple games that could be played inside an igloo, using what they had on hand. They were games of strength and skill that kept them sane and could also promote skills used in the hunt.

Given that now northern people have satellite TV and pilates classes, the traditional games almost died out. But they promote fitness without needing any expensive equipment, and at the same time foster community spirit and preserve cultural heritage, so they have been preserved as the Arctic Sports and Dene Sports at the Arctic Winter Games. The AWG is basically an Olympiad for northern peoples, from Canada, Alaska, Scandinavia, Finland, and Russia. Not everyone has the same traditional games, and the emphasis is much more on sportsmanship than winning, so the competitors help each other out. There are also familiar southern events like indoor soccer, gymnastics, table tennis, hockey and badminton. You see the theme in those: all sports that can be played indoors. There was also biathlon and dog mushing.

The first event I saw was the stick pull. I'm sure the name can be laden with all kinds of lewd innuendo in Dene, too, but the stick in question is about 30 cm long, thicker in the middle and tapers towards both ends. Competitors stand shoulder to shoulder, facing in opposite directions. An official slathers the stick in lard (I suppose it was once seal fat, but this was clearly a tub of Crisco), and then the competitors both grasp the stick, their thumbs facing. On the official's signal each pulls back. Arms must be straight, no jerking or twisting, just pull the stick straight back such that your competitor's hand slides off the other end and you alone are left holding it. 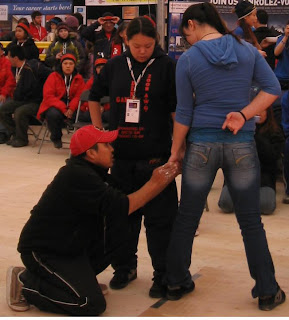 The girl in the blue sweatshirt and faded jeans was an eventual medalist in the event. I can't remember if she took gold or silver. The first picture shows the start, and the second picture is during the competition as both girls try to pull the stick back. Each match-up is best-of-three, with the competitors switching hands for the second contest. If a third round is required, a flip of a coin would determine the competitor who picked which hand to use. 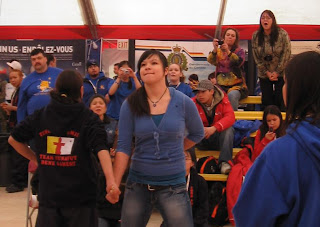 The third picture is of the men's events, and gives a clearer view of the stick. 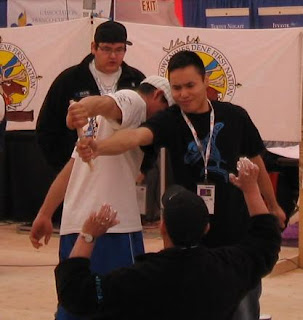 I also have pictures of the one arm reach. In this event competitors must balance their whole weight on one arm, while reaching a suspended target with the other. It is not immediately obvious from the pictures below, but only the competitor's hand is on the ground, his knees and feet, while they may look like they are on the floor, are actually being held up. You see here the suspended target, a little mini stuffed seal. (I tried so hard to buy one like that, but couldn't find one for sale anywhere). The limitations of my pocket camera and photography skills show here. In a school gym, no flash allowed, I wasn't able to capture the motion of his hand except as a blur as he reached up to touch the seal. The people in chairs behind him are officials, and they were quick to call fouls if the competitor did not keep his balance and form during the reach. 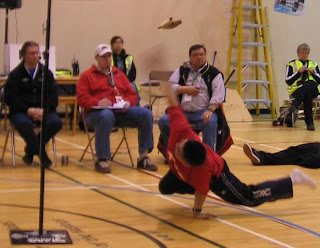 The competitor below is named David Taylor. He won the event easily, playfully doing things like poking or tickling the seal in the early rounds, but you would never say that he humiliated his competitors because he was such a good sport. he was literally coaching the others in between attempts, to the extend that if someone missed the seal, they would turn and look at David, waiting for his analysis and suggestion. 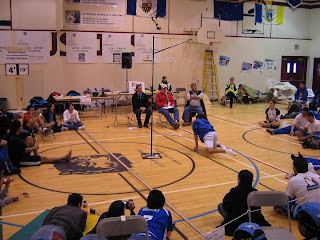 I also love the fact that the other competitors just naturally lay in a circle to watch. You can almost see a giant igloo enclosing them.

I don't have a good photograph of the final event, the knuckle hop. I think I was too busy watching in horror to take a photograph. Competitors start in the position of someone who has just done a push-up: arms extended, body straight from head to feet and weight resting on the hands and feet only, except that their hand are in fists, so they rest their weight on the knuckles. They then bend their arms, like someone starting the down phase of a push-up and push off, hopping forward, and yes, landing on their knuckles. This is repeated, as a means of locomotion, until the competitor collapses from exertion. Each competitor starts when he is ready and goes as far as he can, one at a time. Instructions from the officials to the competitors were, "when you are finished, stay where you are until the officials can mark your place, then go straight to the medical table." There were several nurses working the medical table to clean and bandage damaged knuckles. I heard one spectator say, "this would appear to be a sport where performance could be improved through consumption of large amounts of alcohol." I certainly have never seen sober people inflict so much pain on themselves in the name of competition.

The games were inspiring, both in the "gee, I want one of those little seals to see if I can do that" way, and because it showcased healthy, positive youth, making me proud of them all.

It's not your photography skills that are amiss; you're just running into the limitations of your camera. Capturing fast motion indoors is impossible without a lot of light and a very high end camera. Not even perfect skill can make up for equipment limitations.

> Given that now northern people ...

Relative context is a hoot. We call people from New Jersey "northern people".

The recent postings have been great, and prompted me to watch a video on how to build an igloo. There's a ton of it you can Google up, but being shot in 1949, THIS ONE has the best "grade school blurry film projector" classic feel to it.

I now want to try building an igloo myself, but being in Atlanta, it won't be soon.

"knuckle hop" probably would hurt less if played in the snow instead of the gym floor.

If played on solid ice, on the other hand...

I am so jealous of all you are experiencing. Just wanted you to know that.

(and if you figure out who I am, keep it quiet, I am blogging in secret. LOL)

I thoroughly enjoyed your post, and learned a whole bunch. Keep up the great work and have a nice weekend!