I have one more non-aviation blog entry to make about Yellowknife. It's such a cool city, and I don't mean that just in the "a half hour walk at -30 give you an awesome ice beard" kind of way. (But that is true. I was there for about a week and most days it was -10, maybe down to -17, not really that cold, because of how dry it was, but one day it dipped to -29. That was cold enough that the moisture in my breath instantly froze white on all the tiny hairs on my face. I looked like an extra from Titanic. Usually it's just guys that get the ice beard, but the temperature, dewpoint and speed I was walking made the perfect storm of supercooled moisture).

I walked up to the Legislature building, out on one of the lakes. Apparently they deliberately built it where the office towers of town were not visible, so that the members of the legislature who are from little communities with no big buildings, just wilderness, could look out on the lake and feel at home.

It's a new building, not built in the time of solid brick and granite and copper roofs like most provincial legislatures. The architects used the shapes of the igloo and the teepee, the traditional homes of the Inuit and Dene people, and a lot of effort went into similar symbolism and tradition with materials and construction details. All the other provinces sent gifts of artwork or fine furniture for the building. It's like Yellowknife is the much younger sibling of the provinces, and they all gave her stuff to help her as she finally moved out on her own. 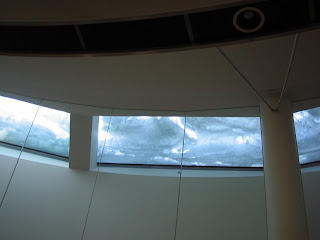 This is taken in a meeting room upstairs. There was a lot of beautiful artwork in the room, but what I chose to take a picture of here was the ice on the skylight windows. That's all this is: light shining through ice.

Here's a picture of the main council chambers. Note that there is not a government and an opposition like in most of the rest of Canada. Government in the NWT is by consensus. The skin is that of a polar bear that was threatening one of the communities. The member of the legislative assembly for that community shot the bear, and gave it to the council. 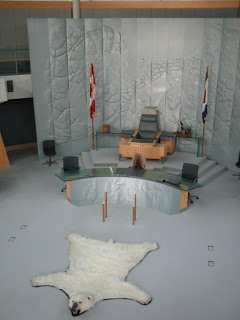 I wish every community's problems could be so easily slain, and then laid out on the floor in front of the seats of power. I don't think a rug made from the skins of pimps and drug pushers would be as attractive, though, and it takes more than a good rifle to slay inadequate housing and medical care. And unfortunately even the bears are not such a simple problem. The real problem is not the bears themself but that climate change threatens their food supplies, so that polar bears are ranging further south than ever before, trying to make a living on land instead of ice. A polar-grizzly cross was discovered a couple of years ago, and three starving p olar bears were shot just recently in Deline, well south of their usual range.

Im glad I can live vicariously through you for the time being...LOL.

Well, pimp skin..depends on the tats.