Commenter Pete Templin broke the news here first: the remarkable author, athlete and rights advocate Dr. Elizabeth McClung passed away at the end of April, after spending years defying doctors' prognoses and anyone's expectations of what or who she was or could do. I met her some years ago through her blog Screw Bronze, stumbling upon an entry after a Google search and finding her to be such an interesting person that I went back to the very beginning of the blog and read it chronologically, over a number of days. As I witnessed her health worsen I compared the dates of the blog entries to the date I was reading them and feared the blog would end abruptly before the current date. It didn't. The writer was still alive, and still her despite what her condition was taking from her. 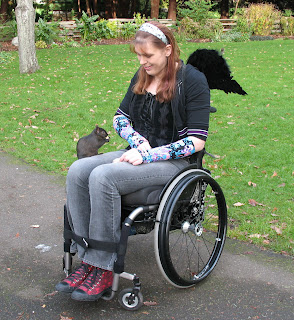 We talked in e-mail, and I sent her a number of postcards, but none as spectacular as the postcards she sent me. She had a talent for figuring out what would suit people, and make them happy, and she sent postcards to people all around the world, little rays of sunshine to people who wanted them. I felt a little guilty that she was sending me such artfully constructed postcards, and well I tried, but not hard enough. Ten minutes for her was such a great percentage of her productive time in a week that it was the equivalent to my spending hours on something. I started to hold back a bit, because she wouldn't acquiesce to my please to just enjoy what I sent and not reciprocate. That wasn't who she was. The title Screw Bronze is a reference to the frequency with which Canadian athletes achieve third place results in the Olympics. Being in the top three in the world is great, but Elizabeth fought for the gold every time, for herself and on behalf of others, and berated those who didn't to shape up. No excuses. I copied a quote someone posted in memoriam, but now I can't find the attribution. She was "a really amazing woman who went through the fires of hell and described them in detail, and still found joy in life."

We didn't always agree on things. We once got into an e-mail argument that had a serious physical effect on her, and her wife Linda had to intervene to protect her. I know Elizabeth didn't want to be treated like a delicate flower. She certainly wasn't one. She was strong beyond belief. She loved animé and manga and Japanese fandom. I'm not very conversant with these genres, so I'm probably using the wrong terminology. She also liked some aspects of Victorian gothic, but not, to my knowledge, the white make up. A composite image Elizabeth has her wearing a corset, skull earrings and Hello Kitty socks while feeding squirrels from her wheelchair, amid old tombstones adorned with spires and stone angels.

I only met her in person once. I found her as passionate about her ideas and as well informed on the topics she addresses in real life as she is on her blog. She had a seizure while I was visiting, but shrugged it off, "This is normal," I think she said afterwards. Maybe even "boring." If you read on her blog about what other medical issues she had, I suppose a seizure is boring in comparison. She had some memory issues, but also had remarkable coping strategies.

She never wanted a funeral, but on May 19th, what would have been Elizabeth's 43rd birthday, those who wish to remember her are invited to celebrate by sporting a corset and/or a skull (temporary) tattoo and telling people why.

There's a postcard from her on my desk. Amongst the colourful stamps on the back, it asks, "I'm still alive. Are you?" Yes, yes, I am Beth, and more so for having met you. Pledge to be alive your whole life, people. If you have the power to conceive of and express an excuse, you have what it takes to do something positive instead.

Thank you for this tribute to Elizabeth McClung. I discovered her blog through one of your posts and became a faithful reader. She was a remarkable person, and I will treasure the postcards she made for me.

Sorry for the loss of your friend, and the friend of so many others. You're written a wonderful tribute to someone who sounds like she's done so much for so many others, even with the huge challenges she faced herself.

Just saw this (a collateral from googling "cockpit conversation"). Lucky you! But we tend to , eventually, get what we deserve, including email correspondents and mentors.Good on you, and on her legacy.