Li Jingchun, a farmer in China has built what amounts to an art installation or perhaps a plaything, a tribute to his love of airplanes. It's something that he's clearly been inspired to create. It's fun to look at and he has every right to be proud of it, but the media coverage is strange. 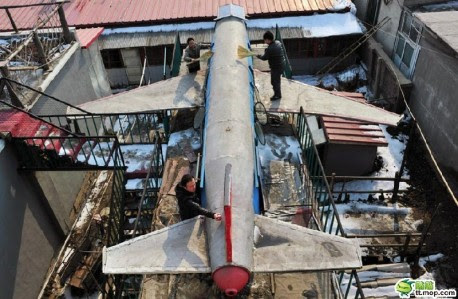 Not strange that it's covered at all. I'm assuming the story originated in the PRC, a local man does cool thing story. The same photos and pretty much the same story have appeared in other countries' press. There's nothing wrong with the news featuring a person pursuing an unusual hobby, it's just that the media seems to be unquestioningly accepting that the man built an airplane. An airplane is an aircraft that generates lift by airflow over surfaces that remain fixed while in flight. Look at the picture. Is the media humouring him, or do they really think an engine would solve the issues with this "aircraft"?

It's made of recycled iron plates. There is no camber to the wings or stabilizer. There are no control surfaces or provisions to attach any. The wing surface area is tiny. The propeller is clearly ornamental. Am I just being a spoilsport? I would love to play in Li Jingchun's creation with him. I think it's marvellous. But why does this bother me? There are two reasons.

One is scientific literacy. I'm scared that the people who wrote edited and approved these stories for publication can't tell that's a creative, fun structure inspired by airplane form, and not an airplane. I'm scared that readers depending on media for information will take it at face value that the structure in question is an airplane, thereby discounting the skill and calculation that goes into actually designing and constructing airplanes. Lack of respect for knowledge, skill and engineering leads to lack of willingness to fund education, research and safety.

And the other is that there are people who really do design and build airplanes in their back yards, a project as different from Li Jingchun's as writing a story in Chinese is from creating faux-Chinese writing wallpaper. Many homebuilt aircraft builders don't have access to the education and research that I just whined about in the previous paragraph, but function is inspiring form.

It's not clear whether Ding Shilu's project actually flies, but it appears he designed it himself with some knowledge of aerodynamics. Here's an EAA critique of the might-be airplane.

I don't have this guy's name, or a picture of anything other than his crotch, and his creation isn't an airplane either. It's a freaking gyrocopter. If you think the footage bluescreeened, there's more here, along with someone else in a homebuilt helicopter.

Yang Weiming built his from a kit, and the test flight was reportedly his first solo. Here's video of the flight. While the Gizmodo article suggests that the gyrocopter pilot avoided showing his face because he was doing something frowned on by authorities, the Chinese article implies that the government is quite proud of this activity and puts no restrictions at all on experimental aircraft.

I'm with you on the scientific literacy thing. There are adverts on the TV at the moment for a "chemical free floor cleaner"
not sure how they have managed that.
It might seem like a little thing but it is contributing to the general decline in scientific understanding from the general public. So people get taken in by miracle products and general hokem. It makes me sad

The concept of truth and science, as we know them, in the PRC are only constructs utilized to gain or deflect power by most people and all the government.

I feel for people yearning for flight, who were not lucky enough to be born in the right circumstances. Whatever engineers may say about the aircraft, I have to admire the courage of the fellows who built them and flew them ( first solo! ).

Still, too bad some of the accumulated knowledge can't be used to make their flights safer. That monstrous ultralight is a case in point. I don't know much about airfoils, but that wing looks like prehistoric.

Totally off-topic, but historically relevant: a few years ago, you highlighted another blog and another individual who would send now thousands of postcards all over the globe to people who wanted them. Dr. Elizabeth "EFM" McClung passed away on Monday. I enjoyed reading much of her blog, in vastly different ways than I enjoy reading yours, but I'd likely never have found hers without yours. Screw Bronze blog

Thanks for the news, however bleak Pete. I still have a postcard from Elizabeth.