Not Me and Not In Front of Me

This gives me the chills, not for the usual "please don't let me forget to put the gear down" reason evoked by seeing someone else land on the belly. I imagine myself flight planned into Iqaluit of origin because having this happen ahead of me is one of the scenarios that goes through my head a lot. If I'm flying into Iqaluit I am probably carrying as much reserve fuel as I can, because there aren't a lot of places to stop n the north. It's like crossing an ocean. There's often a point of no return where I have to continue to my destination, because there's not enough fuel on board to return to Kangiqsualujjuaq. It's not a good position to be in. The weather could go bad. If there's any question of weather I wouldn't be continuing, but what if something happened right out of the blue, like a gear up landing on the only runway? 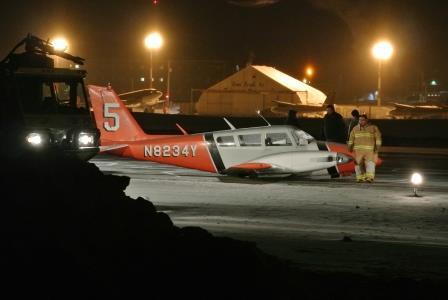 Maybe this guy (the registered owner has a man's name) knew he had a problem and held off until dusk, to burn extra fuel and wait long enough to let en route aircraft land before he shut the runway down. The type, it's a Twin Commanche has a reputation for landing gear issues. I don't know how deserved the reputation is. Airplanes do get reputations as unshakably as high school girls do, and sometimes for more trivial reasons. So maybe there was nothing wrong with the airplane. Maybe he just forgot to put the gear down. It could happen, long trip, unfamiliar airport, unfamiliar procedures. The airplane is registered to a private owner with a mailing address in Florida, so I'm assuming he doesn't fly into YFB every day.

Maybe I've been fighting a bigger headwind than I anticipated and I'm down to thirty minutes of fuel as I call up the FSS still ten minutes out. They advise me that traffic is a Twin Commanche planning left base for runway three five, no conflict and I continue inbound, to follow. Maybe I'm joining the circuit and I spot him on final, down below me and I don't see that the gear isn't down. I see him touch down and then I focus on completing my prelanding checklist and rolling out on final myself. And there I am on final with twenty minutes of fuel on board and I'm advised by either the landing pilot or the FSS that he will not be clearing the runway any time soon.

I'd spend precious fuel in the overshoot and then what? I'd already know I had nowhere else to go, so I'd throttle right back and configure for best endurance. CYFB has 9000' of runway, so it doesn't really matter where in that length the PA-30 is sitting, there's room for me. I would advise the FSS of my fuel situation and that I would be landing on the available runway. And then I would do it, checking the gear at least twelve times between downwind and touchdown. 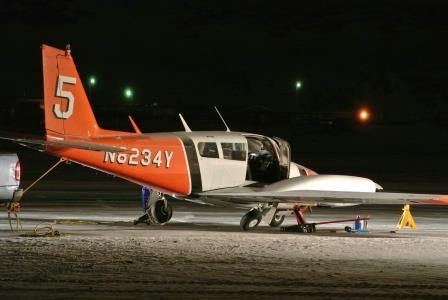 If I had enough fuel to hold, I might have stayed circling and watched crews jack up the airplane and get the wheels down. Just because they got them to extend on jacks doesn't mean that it was the pilot's fault they weren't down the first time. The US NTSB will probably publish a report on this, based on Canadian TSB action. I haven't found any more information about the Twin Comanche: it only happened tonight, but here's a great pic of the airport from a couple of months ago. 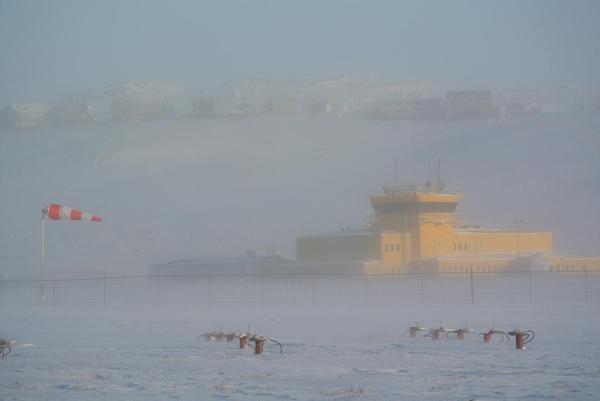 I landed today, not in Iqaluit behind a Citation that did have its wheels down. I stayed above the glideslope all the way down, because when I centred the needles there was some wake turbulence. Not enough to be dangerous: they were five miles ahead of me, but with clear weather why not be a little high and have smoother air? I had to brake a little more aggressively than usual to make the taxiway, but I think it was worth it.

Edit: A follow up story says it was a gear collapse after landing, and that they only closed 4000' of the runway, leaving the rest open to people like me, and that the incident affected no flights.
Posted by Aviatrix at 04:47

Now I am sad I will probably never visit Kangiqsualjjuaq. What a fabulous name. Does it have a short-form nickname?

"Georges River" or "YLU". Iqaluit is "YFB" or "Fro Bay". Official names in the north are slowly going back to what they were called before Europeans stuck their names on them, but the old names are still around.

Those Northern Canadians are just amateurs at long words. Have you tried the Welsh URL shortener:

More seriously, if a runway was blocked and somebody really needed it soon a bulldozer or just a couple of trucks could clear it in a few minutes with another few needed for the subsequent FOD walk. Talked about this with a friend who's a 777 captain and has quite often committed to a single runway on an island (e.g., in the Seychelles).

In extremis, would a taxiway work there?

Often forgotten...nobody said you have to land on a runway.

I think the longest straight stretch on a taxiway at YFB is not 1200' long. I'd much rather land over or short of a disabled aircraft on the 9000' runway. Northern runways tend to have just the runway and a small apron, to which you have to backtrack to the sole exit.

Like Sitka? When you land there (as a passenger in my case, of course) you shoot past all signs of airport, stop, do a U-turn, then trundle back down the runway towards the terminal (thinking "golly, I hope nobody was following us too closely").

Ed: Well, that's exactly what I was thinking, because nobody in North Wales (in my admittedly modest experience) actually SAYS "Llanfairpwllgwyngyllgogerychwyrndrobwllllantysiliogogogoch" with a straight face. They say "Llanfairpwll."

I can't help but wonder if, in a relaxed mood, somebody in Northern Quebec might say "I'm running in to Kangiq' to do some shopping. I'll be back after the spring thaw!"

Breaking news in Australia, a beechcraft Baron had a nose wheel fail to deploy on landing at Toowoomba;

Can you suggest how to pronounce Kangi....?

I can confirm from personal experience than Twin Comanches do indeed tend to have landing gear problems. My old Twinkie used to have fairly regular landing gear issues - mostly related to the ancient electric motor straining to raise/lower the gear and popping the breaker in the process. Never had it fail to lock down in place though.