From Russia with the Munchies

My alarm clock is a company-provided smartphone, and most of the time I just go to sleep with it by my bed, because when it rings or a text message comes in, I have to be at the airport in an hour. Or in the lobby in twenty minutes if I'm on the road. I'll get a heads up at the end of the day what the earliest I may be called is. Sometimes  it's early. We took off at 4:42 a.m. local time a few days ago. So if I ever give you my cellphone number, remember that it is for that one time use, on the occasion that have arranged to meet you for. It is not for you to call me or message me in the future just to say hi, or even if your cat is on fire. If you do, I will wake up, set your other cat on fire and go back to sleep. If you don't have two cats, then fireproof your dog. I feel strongly about my sleep.

When my phone does ring, on this specific occasion with the sound of the alarm clock, because we had arranged a (fairly civilized, as you can see by the time on the phone) meet time in advance the night before, I woke up and checked the graphical area forecast for the weather I could expect. I zoom in on the screen to see what it says. 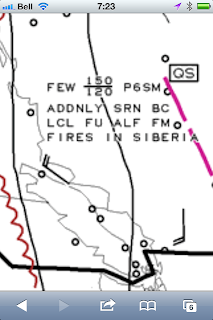 Can you see that? It says ADDNLY SRN BC LCL FU ALF FM FIRES IN SIBERIA. That's GFA-speak for, "Additionally, in southern British Columbia there will be some areas where there is smoke aloft, from fires in Siberia." The fires in Siberia part is written out in full because, well there just isn't a code for that. There are forest fires in Siberia, over the top of the world, and it's making it dark here. Trees on fire. We joke during the flight that it's Siberian pot fields on fire, as an excuse for our errors and our increasing hunger. All day it's the topic of conversation with ATC and other flight crews. Siberia? The poor visibility affects our work, and we spend the next week trying to escape the smoke. The visibility gets down to less than two statute miles in northern Alberta and Saskatchewan. It just shows how environmental impacts in one country affect the rest of the world. 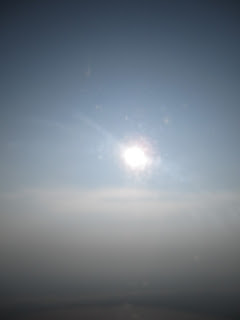 Apparently there isn't a blogspot code for "wrap the fricking text around the pictures, damnit," either because I can't make it work. So, sorry about the ugly gaps.

Take some chocolate with you for the munchies. Brownies, Three Musketeers, Hershey minis. They work quite well when the munchies arrive, not that I have any personal experiences...............

I feel your blogging pain. And maybe I can help.

It looks like it *is* possible to float text around your pictures. An example is here