The airplane with the broken off wingnut goes into maintenance and comes back out of maintenance still with no wingnut. Damnit. I didn't physically write the defect in the journey log because it was perfectly serviceable. I wasn't going to ground myself in Fort Swamp over a wingnut. I've flown airplanes that required tools to open the fuel caps as standard. But I'm a little teeny bit annoyed. I did tell the PRM the problem and this little tiny thing, the need to pull out a screwdriver to open a fuel cap is going to cost us a tiny bit of time and time and pose a tiny safety risk on every flight. The time is the time it takes for me to get a screwdriver out and put it away again afterwards every time I want to fuel or verify fuel. It's the time I take opening it for a fueller when I could be running to the washroom or filing a flight plan. The safety is the risk that I don't check the fuel level in that tank because it's a pain to get a screwdriver, or that the screwdriver gets dropped somewhere where it ends up in a tire or an aileron. Or just that the time I spend getting the screwdriver, or opening or closing the cap could have been spent spotting something else that was wrong somewhere on the aircraft.

So I e-mail the PRM and request that it please go on the workorder next time, and I go about my business. Today my business is fuelling this airplane to go to work. I open all the fuel caps, including the one without a wingnut and as I open the flap on the broken one, the screw comes all the way through onto the wing. Hmm. It is supposed to remain attached inside the flap. I look closely and inside the flap, next to the real, sealing fuel cap are a couple of bits. One is the tiny rod that is supposed to hold the fastener in place after I give it a half turn. And the other is the bottom end of the fastener, the bit with the bottom of the hole that the tiny rod runs through. 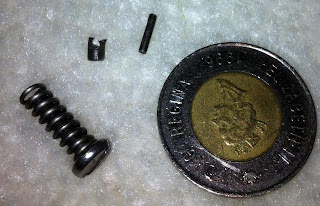 Now it's really broken. Fortunately I'm at home base now, but of course it's lunchtime. It's a rule in aviation. If the airplane doesn't break on a long weekend and/or away from base, it breaks on the engineers' lunchbreak. Lunchbreak and coffee break is sort of an alien concept to pilots. We get breaks, sometimes, between the first engine start of the day and walking away from the airplane parked and chocked after the last shutdown, but they aren't dictated by the clock. They're dictated by a late fuel truck or company telling me to wait. And I wait for lunchbreak to be over before presenting my broken fastener. They tell me no problem, but when I come out to see the repair, it still doesn't have a wingnut. And this time I can't use my Swiss army knife, because it requires a Phillips screwdriver.

They promise me a proper one at the next scheduled maintenance. I'll believe it when I see it. The coin in the photo is a toonie (or twoonie), the Canadian two-dollar coin. It's just there for scale. For the non-Canadians, it's 28 mm across.
Posted by Aviatrix at 00:00

What's that in American?

That would be slightly less 1-1/8 American inches. (As opposed to Imperial inches. Is there such a thing?)

If your loyal readers voted for a goose hit column, would you oblige? Hopefully it didnt result in a cold stick landing in some river, ala Sully.

I wonder about your company's maintenance. Such a simple item, requested several times and they cannot seem to get it repaired? Perhaps the maintenance manager IS a Wing-Nut. At this point, I'd make sure that it is in the log book and then order it repaired at some out station. Nothing, repeat NOTHING should interfer with a lady pilot's visit t o the washroom, not even a Wing-Nut! Love your posts!

Mine broke yesterday away from home, on a Sunday, over lunch. Triple whammy!

Fortunately a very nice A&P showed up and loaned me his own battery from his own airplane to get me home, and didn't even charge me for his time. He doesn't know it yet but his battery is going to be shipped back to him with a nice gift card for a sporting goods shop.

I'm reading my own and laughed aloud at the way my "for the non-Canadians" comment accommodates everyone but Burmese, Liberians and Americans. I don't know if my eight-years-ago self did this on purpose or just wasn't thinking about Americans.