And now, after much legitimate waiting because I was busy and just a bit of deliberate tantalizing because it's fun, are the results of the Nosewheel Roulette game. 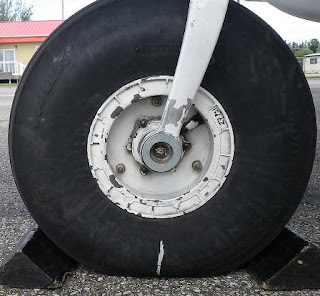 Here is the nosewheel during my preflight inspection, on the ground at an airport expereinced readers may recognize. I actually marked the nosewheel the night before, after parking, in case I was in a hurry the next day, because I had been that day and forgot to do it on the first appropriate flight. Yes, that may not be exactly at bottom dead centre. I had intended to use a plumb bob, but the wind was howling, so that wouldn't have done any good, and I didn't bring a spirit level. 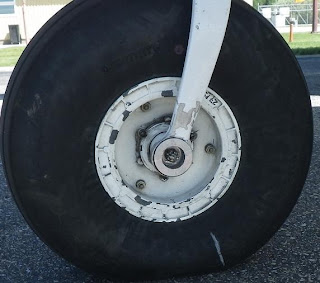 Here is the nosewheel after flight, parked in almost the same place, as we returned to the departure airport that day. It's actually both before and after fuelling, because there was an airplane parked at the avgas pumps when I arrived. I contemplated parking behind it, but that would have blocked the Jet pump, and a helicopter might have needed fuel while I was waiting. So without shutting down I taxied from the runway, to the pumps, to parking, then did a little indecisive twirl, then finally shut down where you see it.

I couldn't find my tailor's tape, the cloth measuring tape I originally used to determine the circumference, but as you can see the mark ended up fairly close to all the way around, and the wind was blowing even harder than the day before, which kept tearing the masking tape I was going to use as an intermediate, so I measured backwards from the bottom and then subtracted that from 128 to find the winning number. I measured two ways, once by cutting a piece of masking tape the right length, intending to save it until I found a ruler, but then I remembered there was a measuring scale on the edge of the chart magnifier I keep on my clipboard. I measured the masking tape with that, then used the flexible measuring tape to measure the distance directly, and both came up with ten centimetres, giving a final position of 118 cm clockwise from the bottom.

(In answer to the valid question on the original post, regarding why clockwise around the left side of the wheel: because that's what first occurred to me. I approach the airplane from the left, like it was a horse, so it doesn't get spooked, I guess, and clockwise seems like the normal way to go. True, it's not the direction the wheel rolls, but I didn't think that closely about it before making the rules).

Speaking of rules, I decided not to disqualify anyone for not following them, except that people who didn't post a guess in the comments didn't get entered at all. You'd be astonished by the number of ways people managed to not follow the instruction: "Post your selection in the comments, then back it up with an e-mail to me with the subject Sunglasses." Another time I may automate the process, so be warned. Here are your winners.

No one got the exact correct answer, but Alex guessed one away (by avoiding the popular low numbers and picking the stealth fighter) at 117 cm and leisuresuitwally three away at 115 cm. I have already sent their addresses to SunglassesShop.com so their prizes are on the way. One of the comments I saw implied that a reader thought I was buying the sunglasses, so I'll reiterate that SunglassesShop.com is donating the sunglasses in return for the mention on the blog. They are sending me a pair, too. I haven't received mine yet, due to a postal strike that only just ended, so winners, please let me know that you receive yours. I will happily post photos of winners wearing or more anonymously displaying their prizes, if they care to send them to me.

Meanwhile, Don, who was certain 55 would not win, was absolutely correct. It was the furthest possible number from winning, so Don won the booby prize, the Towel of Questionable Taste. I will send it to him unless he elects to cede it to one of the people vying for it in the comments, roll it over for a future contest, or sponsor a dedicated blog entry where I burn the thing. And no, Don, you don't get to see what it looks like before you decide. It will be dispatched according to your instructions, when I next get home so I can wrap and address it.

Darnit, I was only 11 off. Oh well. Thanks for having the contest!

If you look at the way the wheel goes around, LT, you were really 4 cm over.

Why did you use circumference of the wheel?
I am a Maths dunce, I thought you would use degrees as in 360 degs. Using where the wheel touches the ground as 0.
Then measure from the centre of the wheel to the mark using N.S E.W. from the mark.
As I first said I am a Math dunce this could be all wrong!
Love the blog though.

Anonymous 8:54: Suggest a practical way to do this precisely on an actual aircraft wheel with equipment I can conveniently carry in my flight bag, and perhaps I'll do it next time. Even with a protractor I don't see how I could distinguish between the 346th and 347th degree.

Thank you Aviatrix for the little indecisive twirl :)

I didn't win, SO! it must have been a fix, a wheel that rotated backwards instead of the normal way..geez! THE FIX WAS IN,no doubt. I think the National enquirer should investigate, maybe call in the RMCP....oh well, maybe next contest could be..nearest inch to the gas pump after running out trying to get there.

I see your problem. Sorry, I do not have any suggestions for you.
Cheers.

Yesss ! My secret plan to be the worst guess worked ! :) Now to explain to the wife why I'm getting strange towels from female Canadian pilots..........

Easier to explain a towel than to explain how you ended up 4cm short of glory.....

Thanks for trying to make me fell better about myself Trixie!! LONG story SHORT......I ended up on the SHORT side!