Back home from what was salvageable from my vacation break, I'm now packing to go back to work. I'm always either living out of a suitcase or packing or unpacking one. There's an empty brake pad box in the bottom of my suitcase with writing on the inside. I must have thought it was terribly important to record for posterity. "Walkaround. AME inflating nosewheel, inspecting work done yesterday, brake disk, brake pads, fuel, break in, three airlines arriving one behind the other, us, exit, cooling period, test, happy, depart."

I remember that. The nosewheel tire pressure was low and the AME was inflating it while we did the walkaround. I'm often trying to start a walkaround inspection while my airplane is still being put back together, or even end up putting the airplane back together as part of my walkaround. Gotta love it when you find a part on the wing or lying in the cabin and have to ask, "Does this need to go back somewhere?" I should keep a spare spark plug in my flight bag for the purpose of frightening AMEs. 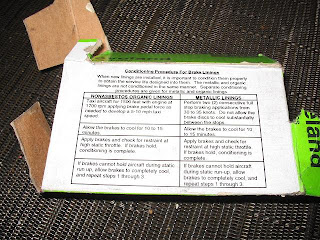 We use the metallic brake pads, described in the right hand column in the picture. Typically the brake pads are changed as part of a scheduled inspection so an engine run up is required too. In such a case I will run up the engines then do the brake conditioning on the runway and then taxi back and shut down, using the break for leak checking as the cooling period, then checking the brakes again before departure.

It occurs to me that people who can't spell well enough to know the difference between taking a break, braking to a stop and breaking in the brakes may be confused by this post. Spelling is important, folks.

You've probably noticed a lot of typos and mismatched sentences lately. I've been blogging offline due to terrible internet and using Notepad, which has no spellchecking capability so it doesn't catch my frequent letter transpositions, and sometimes scrolling goes amok, so the insertion point for editing is not where it appears to be. Sorry about that. I know spelling is important for good communications.

Ah yes, Hooked on Phonics... Sometimes, I am amused at the unintended consequences of things folks think are "great idea." Other times, not so much...

I was at THE flying college in FL this past spring at a conference. We were drafting a group response to an NPRM and they had a college senior doing the typing for us. We could see his work on the projection screen...

Now I'm a techno geek, but it was very interesting to see how a student that has literally grown up using a computer (and probably H.O.P. too), used the technology. He would spell the difficult words phonetically - like "inskrootebl." Word would catch the "typo" and underline it and he would - without breaking stride - quickly right-click the word, select the correct spelling from the drop down, and go back to typing. So, he seemed to know how to spell, but it was faster to "sound it out" and let Word suggest the fix...

I wonder how that will manifest itself in the cockpit of a 73 or RJ?

As I understand it, Japanese input methods often work in a similar way: you enter the word phonetically and then the IM suggests appropriate kanji for the word you've just entered. It's interesting to see the same technique being reinvented for a new language.

did you pay for the title of the post? I think I have seen it elsewhere this week.... :P

Sparkplug.... maybe a simple small screw would be just as effective, with the advantage that it's smaller, and COULD actually be of use one day.

...rolls eyes "excuse me, but I just found thus where you were working, I don't suppose it's important is it?"

(Mind you, the plane might be ok without a screw, but not without the sparkplug, so maybe your suggestion IS better)

If you're serious about spooking a mechanic, a hose clamp is more effective (simpler and lighter too).

It won't run right without the plug, but a missing hose clamp is undetectable, and the very idea it could have been overlooked is...downright sinister.

If you're going to pull that kind of joke, a structural screw will do the trick. Or a used castle nut.

Non-structural fasteners like the sort that hold on inspection panels, cowlings, fairings, and inteior trim... quite a few can usually be missing without anything bad happening.

But now that I've typed that, I would not advocate it. Its beyond cruel... it would make me very worried that something had fallen off which could be catastrophic.

Airphoria-- It's funny you mention hose-clamps: there's an ATC recording making its rounds on the internet, from an engine failure in IMC (safe landing) that was precipitated by a hose-clamp failure.

Tyler, the videos have been removed already. I guess it was an unauthorized use of an ATC recording, or something.