I spent a while arranging these and captioning them last night, but when I pulled up the blog entry to add something to it, I found that between lousy hotel Internet and Blogger misbehaving, the PHOTOS were gone from the entry. So I've re-added them quickly. Times are in the filenames. 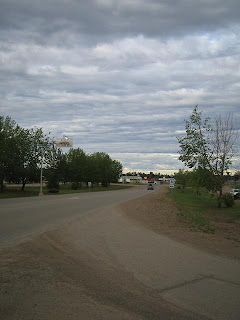 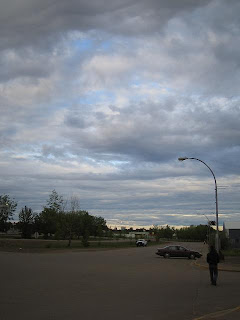 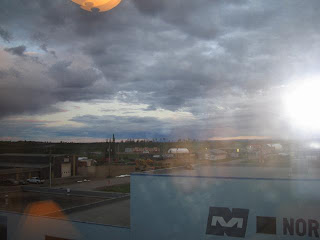 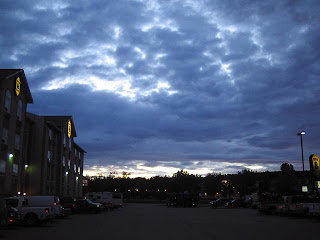 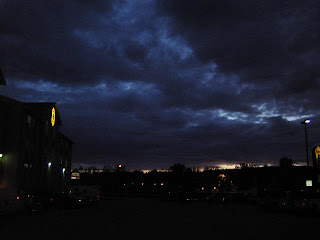 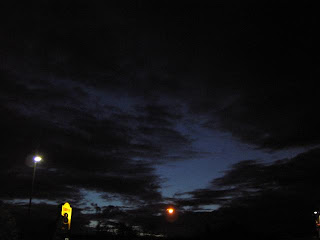 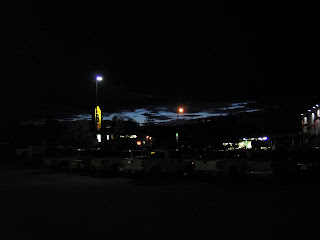 I took a series of photographs for you, of the 'night' sky on the evening of the June 21st. That day at noon the sun was directly overhead the Tropic of Cancer, and we're 36 degrees north of there. That means its zenith was 54 degrees above the horizon, and from our perspective today the sun described a big loop, arcing diagonally across the sky, westward and downward to the southwest horizon, setting at 22:25 local time, and then sneaking back along, just below the southern horizon, towards the east, reaching a nadir of seven degrees below the horizon and then rising again from the southeast at 3:58 local. Officially night began at 23:50 and ended at 02:34 If that's symmetrical, then the darkest point of the night should be about 01:15.

Curiously, the Sunrise/Sunset times link on the Nav Canada site was broken when I tried it, so I had to call a briefer instead. I admitted that it was for my blog. No shame.

There are no tricks with the camera: no long exposures or filters. It's just an ordinary camera. I tried to keep the automatic light meter from fixating on the lights along the highway, so it would expose the sky correctly. The camera started thinking that it was dark around 11:30, but the sky was still quite light. And this is a cloudy night. You can see how light it is where the clouds aren't.

Flip that around to December and the sun struggles seven degrees into the sky at high noon, only to set two hours later. And after it sets there it is very very dark.

Good old Fort Nelson, my birth place and old home town. I remember my grandma putting us to bed when the sun was still up and I would complain about it...

...i see you're makin it super in Ft Nelson....spent many a winter at the end of the Sierra up there. Only a couple summer solstice though...i think i had that exact view of Northern Metallica out back. Say, if you have some time off & get bored the Liard Hotsprings are pretty cool...bit of a day-trip though.

Actually, at the summer solstice, the sun rises in the northeast and sets in the northwest anywhere north of the Tropic of Cancer.

Also, at 59° latitude on this day there is no astronomical night, as the Sun never gets below 17° of the horizon. In other words, if you let your eyes be properly dark adapted, you should notice the glow of the sun directly north at local midnight.

Once played baseball at Keg River.
Play ceased at 11.30pm due to an appeal against the light.

(It was really 10.30pm as for some reason that part of the world adjusts the clock away from reality to some sort of "advanced" time, quite a trap for new players)

That part of the world (called "Peace Country" when I blessed it with my presence) averages 18 hours of photosynthesis per day in the crop growing season. Plants grow really well ... er.. in summer that is.

Winter is another story.

M Vasseur is right. I'm in the UK.
The sun goes down in the north-west, sidles below the *northern* horizon and comes up again in the north-east.
I could see dark sky to the south and an all-night "afterglow" to the north.
Most people don't notice it, mind.

I mentally picture Fort Nelson as being waaaayyyy north, right out of my geographical experience, but then I remember that (one of my) home towns — a little place called Edinburgh in Scotland (a place I distinctly remember bathed in light late in the evening) — is only a few degrees south of you. Context counts, I guess…. It certainly seems more exotic than Edinburgh :-).

Hamish, I am in Edinburgh, my 3rd floor flat (apartment) faces North/South and the sky is still a pale blue right through midnight getting lighter until sun up at 04:25ish clouds permitting. It's not bright enough to do much but it can provide some lovely views over the Firth of Forth.
Anyway just like to say Aviatrix, this one of my most looked at blogs even though I don't get some of the technical info.

The sun in the north commenters are absolutely right. I wrote that thinking about the pathetic little southern journey the sun makes at this latitude in the winter, and that the tropic of Cancer is south of here but of course at midnight the sun is over the tropic of cancer on the other side of the world, so that is to the north. Thanks for the catch.

This was my first summer solstice in the northern country and by that I mean above the 45th parallel. I was very impressed that the sun stuck around till 21:10 local. Oh what a difference 7 degrees can make!