A couple of months ago I received an offer from OAG, the company that puts out the Official Airline Guide, to try their online Flights2Go product for free. I am familiar with the print product from a previous life, so I know it is the source of information on what airline goes where when, and hey, free stuff, right? I accepted the free trial.

The online product is a minimalist interface, nothing to install, no javascript, no pictures, just click the URL and get four lines of text:

The minimalism is a good thing. There's no wait to load it, and it's clearly accessible through even the most primitive internet devices. I use it on my laptop, but they advertise it for web-enabled phones, too.

The flight schedules rejected my first request because I entered four letter airport codes, and it only wanted the last three letters. (If someone who maintains a weather, airline, flight planning or other aviation site wants to make me really happy, they could allow both three and four letter variants of airport codes). You can also just type in the name of the city. If I type "New York" I get a choice of Newark, Laguardia or JFK. Type in "Portland" however, and I get a dropdown offering the choice of "Portland," "Portland," or "Portland," with no disambiguation. I can't get it to accept "Portland, ME" or "Portland, Maine," and when I correctly guess which of the three Portlands is the one in Maine (the second) the only confirmation I get is that the offered flights depart from PWM. If I didn't know the airport code, I'd be stuck. 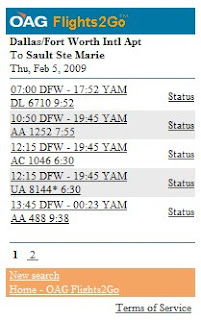 The results of a search are also in a very condensed format showing the airline abbreviation, the flight number, departure and arrival airports and times, the time enroute, aircraft type, and days of the week that flight is available, ordered by departure time. Each result is itself a link to details, spelling out the abbreviations and showing each leg of a flight with connections. On the result below, you have to click the 2 to see details of the YYZ-YAM leg on the second screen. Which you can't, because the one below is just a screenshot. 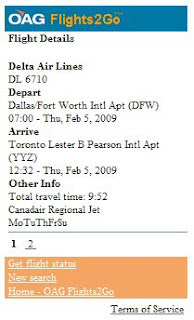 The database includes a lot of airlines, including one of the tiny ones I have worked for, but misses some not so tiny ones based in Saskatchewan and Newfoundland. I think every airline that codeshares with Air Canada is on the list. I didn't check every one, but the ones I did check are, and the ones I noticed absent don't. It also doesn't seem to be able to chain flights from different airlines that don't code share between each other. For example, it can find me a flight from Thompson, Manitoba to Winnipeg on Calm Air, and it can find me a flight from Winnipeg to Thunder Bay on Bearskin Airlines, but if I ask it for service from Thompson to Thunder Bay it returns "no records available". It's not simply rejecting itineraries that don't connect well, because when I ask for Toronto to Winnipeg it offers me a 24 hour 49 minute odyssey connecting through Thunder Bay. It also offers flights connecting through Ottawa (in the wrong direction) and Chicago (in a foreign country requiring passports). But those aren't OAG's fault. Those, I believe, are connecting itineraries legitimately offered by the airlines themselves.

Navigating through the screens is simple, but once you click on a possible choice and look at the details of the routing, you have to use the back key to get back to the results list, which may be quite a few screens. I found a few cases where it shows same flight twice: the same flight number, same airline same times, same date.

I used it to try and help an acquaintance who was looking for information on flights from LAX to HNL (Hawaii for Christmas, mmm) and found a whole bunch of flights that he didn't know about. I was all excited that I was being helpful but when I looked them up, the flights I had found were all routings like LAX-SLC-HNL or LAX-SFO-HNL. While this would be useful if you were desperate for any flight, it wouldn't work out well for him, because he was travelling on a non-rev pass and couldn't risk being stranded in Salt Lake City.

When I was stranded myself by fog I was able to search the database myself for possible alternate routings to my destination and thus ask for the flight I wanted by number. For a control freak it's nice to have that power. I know someone who booked two flights on an "open jaw" itinerary (outbound to one city and homeward from another) through a travel agent who didn't know you could book two one way tickets! Needless to say he didn't get the best possible deal.

It should be mentioned that this product shows you the schedules only, not the prices. Showing prices would violate the Pauli exclusion principle of airfares, that forbids customers from knowing how much their flight costs and what other flights are available both at the same time. (Or, as has been pointed out to me, perhaps that's more the territory of Heisenberg). Maybe that's not really a fundamental law of the universe, but OAG has wisely decided not to risk it. Nah, it's just that if there's an airplane going from Toronto to Philadelphia, all the seats are going on that route. The same consistency does not apply to airfares.

I use the OAG product in conjunction with Expedia when I am booking flights, but in December expedia.com was down so I checked on OAG to see which airline sites to go to. (I know there are other portals apart from Expedia, it's just the one I have bookmarked for both US and Canadian origins). With OAG I found a direct flight to Canada that bypassed the snowed-in US hubs and Christmas delays endured by my coworkers. "You're flying direct?" they asked, while pondering whether they were ever going to escape from their snowbound hubs.

It can also look up flight status and give you toll free numbers for all the airlines it lists. It's definitely a reference for the stranded or last-minute traveller who really wants to see what flights there are as opposed to which ones the airlines claim they have seats on. They don't always match.

I won't pay to subscribe to this service for myself, because I mainly fly between small centres and, checking my recent itineraries, it wouldn't have found me the combinations of airlines I needed to get where I was going. I don't think I'd get my money's worth. I do see this product as of great benefit to people for whom a reasonable schedule is more important than a rock bottom price, and who fly among major centres served by airlines that are not named after local wildlife. Its forte is to show you how to get from A to B with the most precise timing possible, where A and B are both served by the same airline. If your flight is cancelled or full, having this product to see all the flights that are available could really help you optimize the time spent running from airport counter to airport counter to beg for seats, and if it saved you just one overnight in a strange city, it would pay for itself. In my experience, frequent travellers do know their airport codes and would have no trouble using this product.

If anyone has a search they'd like me to try in the database, just ask. I'll report back.

On the topic of airlines and airfares, this amusing website for a fictitious airline appears to be advertising for Air New Zealand.

I found a good strategy to deal with a weather delay at a major airport. While waiting in a 50 person queue at the gate to get rebooked for our cancelled flight I called the 800 number from my cell phone. The phone agents weren't nearly as busy as the Gate agents. The Phone agent was able to get me a confirmed seat and a seat assignment on the flight that we were all waiting in line for. A short while later one of the gate agents stood on a chair and shouted "Anyone with confirmed seats on this flight please come to the podium". They handed me my boarding pass and I by passed the long line and got on the completely full flight when many others didn't. Not sure it was proper airport etiquette, but I looked at is a helping the airline to make better use of their resources by allowing the gate agent to help others. Call it a form of CRM if you will.

The "saverjet" video at the end is good, eh? I don't fly a lot these days, but even I've noticed the piecemeal approach to pricing. I wish they'd just raise their prices and be straightforward about it, instead of charging for "extra" luggage, etc.

The best part is the $15 tip for the pilots. What a great idea! Imagine the haul underpaid commuter pilots could pull in a single day.

I'm actually in favor of a la carte pricing. I don't WANT to pay for stuff I don't want, thank you! More options are almost always better.

The OAG is a real godsend for commuting pilots. When one's able to jumpseat on anyone, and the only obstacle is awareness of the opportunities, the OAG is the ultimate tool.

I am trying to figure out how this product is different from Expertflyer.com and KVSTool (my preferred service, though not web based), both of which seem to allow for the same kind of information you cite from OAG. I did notice on the OAG website that one could pay for booking access too, which would be a plus. It would be lovely to get a comparison of all three from you, especially from the perspective of a pilot who needs on-the-go information.

The author would probably be happy to know that KVS Tool (mentioned by the previous poster, http://www.KVSTool.com/) automatically recognizes both IATA (3-letter) and ICAO (4-letter) airport codes.