It's minus one and snowing lightly at dawn next morning in Montana. I'm glad I had my lined jacket for the walkaround inspection. The wind is still blowing, not nearly as strongly, but enough to keep the dry snow from settling on the airplane. Visibility is good, but I'm up early to get out of here before a front arrives and blocks in the Montana mountains. 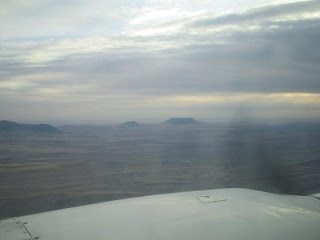 The first picture is of a butte, a rock structure that there's even a town named after in Montana. They always make me think of Roadrunner cartoons, but I didn't see any coyotes this trip, let alone coyotes on rocket skates. Can anyone see what I forgot to do this morning, that the May 29th entry and preflight inspection suggested I should have done? 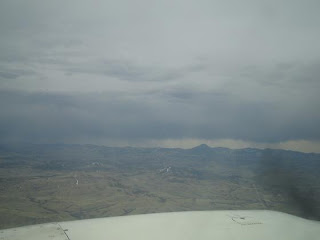 I manage to escape the Montana hills without being swallowed up by the clouds, and begin the more routine part of my transcontinental journey. The sparsely-populated middle of the United States, from say Idaho to Wisconsin to Arkansas to Utah, is sometimes termed Flyover Country. This refers to the fact that people from the heavily populated centres on the east and west coasts don't go there, only fly over, on their way from one coast to the other, or on the way to Florida or Arizona. I'm not sure if it's any more derogatory than "grainbelt," but for me the term is not quite accurate. I can't make it coast to coast or from Canada to Florida on one load of gas. For me, it's fuel stop country.

I often have to go from hither to yon, with very little notice and I simply draw a line on the map, then look for airports of a reasonable size four or five hours apart along the route. Right now I might as well be using a dartboard. For example, I considered landing in Omaha, Nebraska merely because the insurance company Mutual of Omaha sponsored a wildlife program I watched when I was little. One of those shows composed mainly of dramatic footage of large predators either killing or barely missing large ungulates while a narrator applied adjectives and dramatic truths of life to the animals and their dinners. As it was I landed in Lincoln, Nebraska instead, where I had excellent service. They loaned me a nice vehicle to go and get lunch while they fuelled the airplane and cleaned the windows.

But I also I saw a new low in corporate tipping policy in Lincoln. Lunch was at Quizno's, a sandwich chain store, and there was a sign on each cash register: "Tips are appreciated and will be pooled by management for employee events and rewards (separate account)." So yes, the management solicits but steals any tips the employees get, and then gives them back and calls that "rewarding" the employees. I don't normally tip fast food employees, but I suppose I might if I felt that a particular individual did something outstanding for me. But whether fast food employees should be tipped is totally irrelevant to this issue: the management of Quizno's has just told me, in bold letters, that they don't care enough about their employees to reward them themselves. I submitted my opinion of that to the corporate website and have since twice avoided eating at Quizno's, even though it was probably a local restaurant policy.

Anyone have recommendations for quick middle-of-the-country fuel stops? I want quick but not-too-bad-for-me food, fuel, preferably pumped by someone else so I can eat while they do it, deicing in the winter, clean washrooms, friendly service, and simple maintenance available if I should need it. It would be a bonus if there were something interesting in town, even just the world's biggest ball of string, or a giant letter on the local hill, in case it's an overnight stop and I have time to take in the sight. Quizno's not required.

My son brought a big yellow cheese hat back from Wisconsin if that is any help;-)

CWA is a fairly competent airport. It's located in Mosinee officially but it's close to a nice shopping center called Cedar Ridge with food and overnight accommodations. There's also AUW which is in Wausau proper overlooking the river. They have some private jets that live there so I would assume there's an FBO, but I know there's one at CWA. ( I watched it get built and flew out of there quite often in my untamed youth). And you can get fresh cheese curds there!
amulbunny

Speaking of tips, I found this at the Vanuatu Tourism office website while planning for my next vacation:

"Neither tipping nor bargaining is considered civilised behaviour. If you would like to express your gratitude for service, you might like to send a postcard or perhaps give a 't' shirt as a gift from your country. It is neither necessary, nor expected, but such small items are received with much appreciation."

Vanuatu, a small 'island country' in the south Pacific, has been voted the happiest place in the world (in 2006, Canada came in the 111th place), so I decided it is worth a visit at least once...

Heck, at Horizon we are charged an entrance fee to our own company picnic.

I think I'll put Vanuatu on my list, too.

Let's see, checklist....wipe off the bugs?
My first Air Nat Guard unit was at Lincoln Neb airport, they were then called the 155th TacRecon Group (aka "Hustling Huskers"). My wife and I lived in the old base housing to the west.

Another reason to call it "flyover country" is the PRICE of going there. We could have done seven or eight round trips to Portland or LAX for the cost of a two-way to Eppley Field in Omaha. Don't land, just fly over....

During a looong month of all-nighters between Vegas and Winnipeg I used to listen to a trucker's radio station broadcasting from Lincoln Nebraska. It helped keep me awake on that long homeward bound leg.

They'd give weather and road reports all the way from Vancouver to Florida, and take call-in requests from truckers all over the country. If cell phones had existed, I might have called in a request: "Yeah I'm calling from 35,000 feet overhead, driving a 50-ton six wheeler Diesel Nine. Say, can you play Early Morning Rain. by Gordon Lightfoot.

You got it: I neglected to clean the first day's accumulation of bugs before departing Montana. They didn't show up in the early morning light and I was eager to beat those clouds, so didn't dawdle. They guys in Lincoln did a beautiful job of cleaning the window when I got there.

I'll have to look up the frequency of that AM radio station to dial in on the ADF.

Hotels and meals in Flyover country are dirt cheap, even if the airfare is steep.

My parents in law rented a motel room at the Lincoln airport which we had checked out beforehand. On checking out they pointed to the ceiling...there was snuff in the acoustic texturing....but very reasonable.

Love your blog, and thanks for updating so regularly. I know this takes time and effort, which is appreciated.

In general, I think tipping for fast food service makes no more sense than tipping the cashier at a discount store such as Target or Wal-Mart...but, if I'm going to tip for any reason, management has no right to dictate terms, unless the terms are "Please, no tipping allowed". I think it's crass for them to post (and follow) such a policy as you describe.

Mosinee and Wausau are in central Wisconsin.

I heartily recommend college towns! There's always something going on, sometimes the fuel is reasonably priced, and there are pleasant walks to be had.

I could heartily recommend Champaign, IL (KCMI), home of the University of Illinois, but fuel there is atrociously expensive. Worse than the major West Coast international airport I base out of.