Here's a story that didn't get posted from a while ago. One day at a busy US airport we had landed and were waiting for clearance to cross a runway on our way to parking. We're heading for the FBO for fuel and food.

Another aircraft on frequency is on another taxiway, but requesting clearance to the same FBO. Its callsign is not an "N-number" -- a string of numbers with maybe a letter or two at the end -- like most American call signs. It's Justice One. That's not an airline designation that I recognize, and airline flight numbers are usually at least two digits. Maybe it's military. That kind of fits the pattern. They're typically things like "Snake One" or "Liberty Six." There's a whole list of them here. Military aircraft are also often recognizable by the voice of a teenager having way too much fun going really fast. "Or maybe it's a prison ship," I said, mostly joking. Con Air has a great final scene but it's not exactly realism in cinema.

And then we saw it pull onto the ramp. A military aircraft would have had camouflage paint and military markings. A Department of Justice transport for members of the Supreme Court or the like would be a sleek little bizjet. This white-tailed Boeing was the aviation equivalent of the plain brown wrapper. It is a prison ship. Any doubts about that were resolved by the reception committee. It didn't include a red carpet. 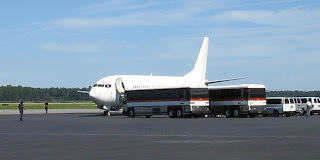 Before they cracked open the airplane, the ramp filled up with vans and buses and police cars that disgorged uniformed men with automatic weapons. We found it incongruous to see armed guards escorting prison transport on the same ramp with the limos and the VIP jets and us. It also seemed strange to have such a large airplane dedicated to prison transport. In Canada I know that escorted prisoners may be moved on regular airline flights, and I've seen dedicated prison transport flights in Navajos and Pilatuses, but nothing bigger than that. I'd heard that the US had the largest prison population in the world, but this drove me to look up numbers. Wikipedia says the US has over two million people in jail. For comparison, this CBC article says there was an average of 35,110 adults in jail on any given day in Canada in 2005-2006. So assuming those numbers are correct, while you could move 0.1% of Canada's prison population in a single DHC8-100, you would need three Airbus A380s to carry the same percentage of the US prison population. That's a lot of bad guys.

One of my co-workers told me he actually saw a group of prisoners chained together on the highway, picking up litter like in an old prison movie.

As fascinating as my brush with this arm of the law was, Hamish's run in with a DoJ prisoner transport aircraft was a lot more literal. After reading his account of coming close to being run over by a convict-filled MD-80 I was teasing him with the ensuing scene if they was an accident and they had to evacuate the airliner. It would have been like The Fugitive but without Harrison Ford or Tommy Lee Jones. Except, I acknowledged after a moment, that an MD-80 wouldn't take much damage from hitting a Cessna 172 on the ground. Hamish picked up the story ...

"What was that noise?"
"I dunno... probably just the new embedded hold short lights. Oh look, there's that weirdo Piaggio parked next to Execjet again! Now where the hell did that 172 in the runup area go?"

Canada has ~30 million people vs. about 302 million in the United States, so while the U.S has a higher percentage in prison, it's not as severe as the numbers might seem when you consider 32,000 prisoners vs. 2 million.

But my intention was not to compare incarceration rates. I was looking at the sheer numbers. In a smaller territory, the US has more prisoners, therefore they use bigger airplanes to transport them.

The US has different laws from us, so I don't know that any meaning can be drawn from the different incarceration rates.

When I was flying hurricane relief back in 2005 I shared an airport with a flock of these 'Con Air' birds. I think they had evacuated the federal prison in Beaumont, Texas. Its right by the airport.

One evening I flew into OAK and saw this white-tailed Boeing on the ramp at Kaiser Air. It was surrounded by white vans and several men.

After I tied down my plane I went into Kaiser and asked about the plane. I was told that it was a nightly flight by Border and Customs Enforcement to transport deported illegal aliens to Mexico and other points south of the border.

However, it did seem to me to be more security than necessary to transport illegal immigrants.

The incarceration rates per 100,000 population are:

We could speculate whether there are that many more bad guys and gals, whether the law enforcement agencies are just better at catching them, or whether legal regimes are more draconian....but we won't.

Last bit of that URL should be:

We see the all-white Justice Department plane (usually an MD-80) on the ramp at Kaiser at Oakland pretty much every weekday evening (but not usually as close up as I saw it the other day :-)). As bobstrawn says, it's usually used for deportations as far as I can tell, but there's always buses and armed men around it on the ramp...

I wonder how the deportation thing works. Does the US have an agreement with Mexico for the latter to accept any undocumented individual that the Americans say is an illegal immigrant?

I actually have this image of the white planes landing at a remote jungle airstrip, the airstairs being lowered, and the guards yelling, "Everybody off!" in Spanish.

One of my buds flew for the Justice Dept. He told me about a guy that had devil horns tatooed above each eyebrow. Can you imagine how a job interview might go?

The flights are a part of "long-distance repatriation" which was enacted to slow the return of these same individuals. They're flown to one of six cities in southern/central Mexico and they will accept up to 300 illegals per day through this program (in other words.....a drop in the bucket). The rest are bussed back to the border so they can try again later. We'd need several A380's per day to send them all back.

Ahem...yo, in the field for 18 years...
The big planes full of hard cases are Boeing 727's or occasionally whatever one calls a DC-9 nowadays because the rear drop stairs (AKA "HIGHJACKERS' EXIT") allow for a favorable security and on/offloading situation. Many individuals are transported on commercial flights under your nose. Look for a guy with a stiff leg (wearing a locked on brace so he can't run) accompanied by a big guy who looks like he would shoot him (because he would).
Our career criminals tend to get out then come back again ("recidivate" or "re-offend"). That's what three strikes was supposed to stop, and it has insofar as the guys who get taken off the street for long stretches...booting up our prison pop. 'Way beyond its capacity.

"Military aircraft are also often recognizable by the voice of a teenager having way too much fun going really fast."
Ever flown @ Mach+ on O2 talking on four radios, taking pictures, dropping smoke, and taking notes all at the same time??? ...if that isn't what being a fighter pilot is all about, I don't know what is and you will have the voice of a teenager Viper Driver

It's just wildly amazing, no matter how old you are, Viper Driver.

majroj said...
The big planes full of hard cases are Boeing 727's or occasionally whatever one calls a DC-9 nowadays because the rear drop stairs (AKA "HIGHJACKERS' EXIT") allow for a favorable security and on/offloading situationV

Yes you are spot on, just seen Nat Discovery channel "the real con air" - amazin what happens out there