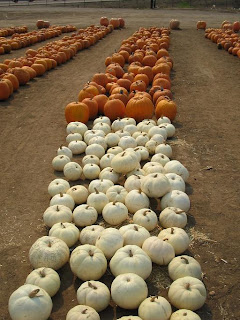 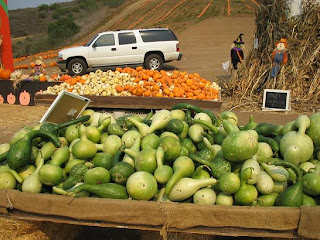 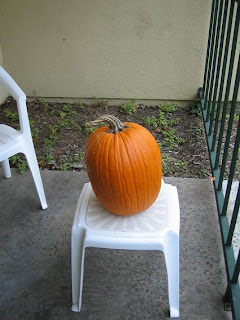 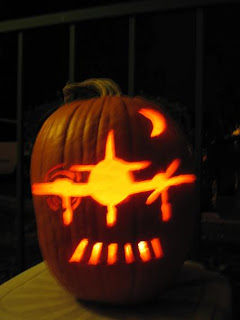 cool! it must've been difficult to carve.

slightly scarier would be with both engines out, i guess.

Now that is properly scary. The nose gear and tail make it look like the cursed engine is the left one...

I wish I had thought about carving pumpkins that elaborate when I had to spend 6 months in a hotel in JAX.

Btw, what did the house keepers think of your pumpkin extracts?

Now, if the gear was stuck up on one side it would be a downright terrifying pumpkin, instead of just a scary one.

Good job, I love it.

Sadly, I think the intent would be lost on 99.9% of trick or treaters.

Hotel staff saw me arriving with the pumpkin. I carved it on the patio and extracted the guts into a plastic bag. I just brought the plastic bag out to the front desk and they took care of it.

How scary can it be? You're landing on a lighted runway :).

Be careful with Easter in the US, you could blink and miss it. Americans don't even get a day off, much less the long weekend extravaganza that happens up North.

Oooo - too scary! Unfeathered, gear down, untrimmed! :-) That's hilarious - I think I might try that this year, too!

Let us know if you get any Trick or Treaters.

Awesome! I showed it to my colleagues who are also pilots. We decided that scariest would be with a high nose attitude-- i.e. on takeoff.

If I squint a bit, I see a winking pirate with twinkly cheeks. :-)

Among your other talents, you are obviously artistic, good with your hands and excellent at photography.
(we already knew you were a first-rate Pilot and Author!.

It is supposed to be on take-off. I couldn't put it in a very high nose attitude and still show the propellers the way I wanted to, because the horizontal stab would have been in the way, and then I would have needed unsupported pumpkin bits.

If I did it again I would cheat and just draw the nose gear strut shorter, so you could tell it was nose up. That's the problem with silhouette: I guess some people see it as a rear view over the landing threshold instead of head on over the departure end of the runway.

That is an amazing piece of art!

Very nice! Got to have something crafty to do in FL, especially if you're not able to fly because of the approaching tropical storm.
That would be more my situation than yours right now since you are up north-- I got cancelled today because of Noel.

I find that extremely creative and well carved to boot. Thanks for sharing it with us!

good job on the pumpkin..=) sure looks difficult to carve an airplane in there..=)

Funny how holidays get ignored or adopted in different countries. Here in the Philippines November 1st, All Saint's day is a _big_ holiday and is coupled with the more general Asian tradition of visits to relative's graves. But Halloween goes totally un-noticed.

In Japan, where no other Western holiday draws any attention ... except Christmas shopping in department stores ... Halloween is a _big_ thing. When I lived on a US AFB there, Halloween eve was the only night in the year that the gates were open to off-base Japanese folks and literally battalions of exquisitely costumed children would come to the doors of the American homes there for several hours ... all carefully monitored by organized parent 'watchers" and every single one with a carefully rehearsed, perfectly pronounced English "Thank You" for each candy gift. I found out from one of my Japanese employees that her children's school had a mandatory full week of instruction/rehearsal for any child who intended going trick or treating ... those three years were the only time I looked forward to Halloween ... it's a big deal to some, for sure.

Dave S-
Thanks for the insight into Japan and Halloween. We are visiting our son in Arizona and were surprised no trick-or-treaters came to his apartment door last night, even though the area is covered with Hispanic kids. I think "All Saint's Day" is a bigger deal here than Halloweeen too.
Shame.
Now we have to eat all this damn candy ourselves.

Weedwhacker with one caged up. Awesome.

As for holidays, traditions are funny about how and when they're adopted. I've read that Christmas wasn't much of a holiday until Dickens wrote "A Christmas Carol".