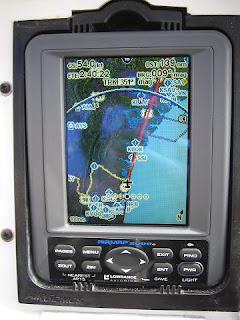 We continue north up the coast to Brunswick, then continue north while the coastline turns east. This allows us to cut the corner of the Carolinas, get out of Hanna's sights, and avoid the whole DC/NYC/Boston ordeal. Even if I didn't just want to stay away from that high-density airspace in our low-density airplane, our ferry permit, required to bring a Canadian ultralight through US airspace, specifies that we avoid overflight of populated areas. There aren't many emergency landing sites in Manhattan, anyway. But we could probably do a great landing in that pool opposite the Lincoln Memorial in Washington, DC.

re: Landing sites in Manhatten - in that aircraft the entire Hudson River is your runway. Apparently, Pre 9-11 there was a vfr corridor along the river - you could fly all the way down from near Montreal, circle the statue of Liberty and fly back north and hardly need to talk to anyone. Not sure if that's still possible?

Yes, there is a VFR river corridor in the NYC airspace. I've not flown it, but I know people who have done so recently.

Without being able to taste it, I'll hazard a guess that pink stuff is congealed salad (also known as Jell-O salad), which is popular down here in the South. It's made with flavored gelatin mix and is prepared a variety of ways with a variety of different ingredients. I have so many memories of Sunday lunch at my grandmother's house and Sunday dinners at church, where congealed salad was almost always on the dessert table. (I never developed a taste for it, not when the banana pudding was right next to it.)

It looks like you had a good ol' Southern buffet meal. And somehow Mrs. Rogers reminds me of a lot of the locally-owned restaurants down here, where the air is so thick with the smell of fried chicken that you walk out of the restaurant with the aroma clinging to you.

The Hudson River VFR corridor is still available - I flew it with my dad a few years ago. If your routing takes you that way, it's well worth the effort.

Jello salad is typically a mix of flavored Jello, whipped cream, and canned fruit salad. As ea757grrl said, it's a staple in the South.

And no American salad bar would be complete without chocolate pudding!