I don't sleep very well. I was blaming the hotel pillow, but I think there's only so much a pillow can be expected to do to counteract stress. There's a lot more here than in my regular job. Here we are surrounded by weather. There's Gustav sending a huge counterclockwise swirl of weather up from the south and Hannah driving weather in from the east. And once we've run the gauntlet of the two hurricanes, there's a huge cold front sweeping across the continent. It's producing thunderstorms in the Dakotas today, but those storms will be in the northeast in a few days. And here I am with someone's pride and joy in my hands, responsible for keeping it and her safe all the way to Canada. If I have to make the decision to lock in in a hangar and wait it out, I'll have to leave, and she'll be stuck. I try to make that not my problem, but it doesn't seem to be working.

Yesterday the blind encoder and then the whole transponder died in fairly quick succession, and the fuel gauge indicated we have a magical airplane that doesn't burn fuel for the first hour. Those are quite surmountable snags because I don't plan on flying through complex airspace and we'll probably be able to beg an exception to the rule for the border crossing. I don't think there's a lot of paranoia in Maine and New Brunswick, where people used to cross the border all the time with shared volunteer fire departments and the like. I'm not sure that post nine-eleven rules have a huge effect on people who are mostly doing things the way they did them a hundred years ago. As for the fuel gauge, Transport Canada requires us to have a means of determining fuel quantity from the cockpit. We do. The fuel tank is translucent and the level is visible behind the seats. But what will go wrong tomorrow? Is it something I can fix? This ultralight airplane long distance flying is not something people do every day, and its success is quite dependent on the diligence and decisions of the pilots. I get up to check the weather at two am, then go back to bed. I got some sleep for sure, because the alarm clock did wake me up.

We eat at Denny's, because nothing else is open at oh dark hundred in an off-season tourist town. Lite Flyer teaches me something: you can ask for oatmeal with fruit on it at Denny's and it's delicious. We take a cab back to the airport and as we walk out onto the ramp we see the beginning of a sunrise. It's spectacular, but the rays of light are filtered through cloud that is already vertically developed. So much for using a dawn start to escape Florida thunderstorms. I walk around the airplane, checking that that everything has survived the previous leg. My plan was to do a thorough postflight after each leg, but I was too tired last night and didn't get anything done but checking the oil, which has to be done while it's hot. 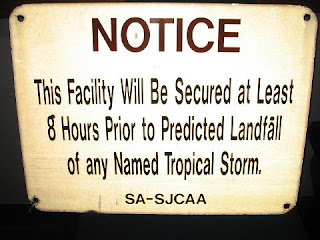 The little parade of curious onlookers that always appears near our airplane makes 'helpful comments as I scrutinize the sky. We wait for a cell to pass out of our departure path and then take off and head north again. There are a few cloud banks across our path, and I go variously under, over and around. The wind was supposed to be from the east today, but our 49 knot ground speed suggests a more northerly wind. We've started to climb up a bit, to get over a layer of sparse cloud, and to search for that easterly wind, or at least an escape from the north one. Ahead of us is another cloud bank. Initially I'm planning to go over that one too, but while the others have been little grey blobs of stratocumulus, this one proves to be building upward faster than I can climb. The top has gone from 2000' to 3500' as I cruise towards it. It's an impressive thing to watch, but somewhat inconvenient. I'm heading now in a space between two towers, not generally a good idea, but 3500' doesn't really qualify as a TCU. But the airplane is so slow I can't time a passage through the space in the moving cloud bank.

As I see little tendrils of cloud moving towards me I instinctively look at the panel. And then I really see it in a way I didn't before. This is a handy, stable little airplane. It is easy to hold attitude and smooth to fly. I carved off a better steep turn during my checkout than I did during my instructor test last month. But the panel is basic. There is no attitude indicator, no turn coordinator, and I can't even see the tiny slip-skid ball from the right seat. If I lose horizon, there's not much left but prayer. Academically, I know tricks to keep the wings level with the float compass, but this is not an academic situation. Perhaps some day I'll go up under the hood with an instructor and practice them. Here and now is not the time. I stop playing stupid pilot tricks and decide to go around the cloud bank. I saw that it only went a short way off the beach. I head east, against the wind, but the former end of the cloud bank seems to have disappeared, and now it's building towards me as well as up. I turn around. Can't go over it. Can't go through it. Can't go around it. Under is left, and I descend but at 1200' I still don't have a clear path up the beach, plus raindrops appear on the windshield. In the few minutes I've been playing around here my little cloud bank has developed upwards into a cumulonimbus. This uncowled engine is not designed to ingest more than light sprinkles of rain, and and airplane should be avoiding a CB. I ask Lite Flyer to tune a frequency, and then I spin around to join the circuit at Fernandina Beach. We're back on the ground after only an hour and fifteen minutes of flight.

From the perspective of convective radar in the FBO I see that a line of thunderstorms is coming straight in from the Atlantic, in the little time loop shown on the computer they are shotgunning the Florida-Georgia border. I know that Gustav is driving cloud and moisture up from the southwest and that Hannah is chasing more from the southeast. Is this it? It's possible that there will be nothing but impassible weather until Hurricane Hannah arrives. Some of the locals think so, and we have spontaneous offers of hangar space. The great thing about this airplane is that it fits in an already full hangar, because it will just go underneath something else. For now we're going to assume it is a normal thunderstorm and will pass by as quickly as it built.

Everyone is curious about our little airplane, and I find myself fending them off. The wings are made of fabric, and while the fabric is strong and waterproof, it's fabric and susceptible to cumulative damage from oils and other things people an have on their hands. Why does everyone find it necessary to pling the stretched fabric on a fabric wing airplane? It's like the compulsion to put fingers in wet paint. And I don't know what else they're going to grab that could do more immediate damage. Airplanes are designed to be strong enough to fly, but there are a lot of parts that can be damaged by ignorant handling.

Lite Flyer put the doors on last night, and we didn't take them off this morning, so when the rain starts at the field it's not coming in the open doors. It is coming in around the edges of the loosely fitted doors and I decide to just let it to see how bad it is. I have the aircraft facing directly into the wind, so it will be a bit like what we could expect flying in rain.

We're lucky this time. There is an early end to this line of thunderstorms and we're airborne again within the hour, making it across the Georgia border on our third try. We exchange high fives for escaping Florida.

This epic journey was always going to be pretty huge, but having the alphabet soup of nasty tropical weather bearing down on the South Eastern USA has made it into one hell of a read!

Really enjoying the story so far. Glad to hear that you're taking the cautious route.

I was just wondering why Lite Flyer did not chose to ferry her ultra-light by truck to her home?

OK we wouldn't have read this fantastic Aviatrix's adventure then.

But I was just wondering.

Reading this has made me remember the trip I made in the Starduster with a ferry pilot from Fargo to Houston.

I think that the trip to bring the airplane home should be a long, epic adventure. It's an important part of the bonding process between an owner and her airplane.

I'm fully engaged in the story. A great read.

How long can you stretch this trip out until you run out of time and have to head back without the aircraft? Hopefully Hanna is moving up the coast fast enough to give you better weather soon.

I have seven days before I have to be somewhere else. The question is how many blog entries will that seven days turn into, and how far will I get!

I've asked Lite Flyer to blog about her decision to hire a ferry pilot and not a truck driver.