All The Way Home

The province of Nova Scotia is a gigantic hammerhead-shaped peninsula that attaches to New Brunswick at Moncton, northeast of Maine. A straight line from our present position to the aerodrome that will be this airplane's home cuts across the Bay of Fundy, a stretch of open water treacherous to decent-sized boats, let alone little airplanes. If I'm crossing that, I want to remain in gliding distance of land, or if not land, at least calm shore waters. And this airplane glides like a brick, so that will require decent ceilings. The ceiling is good now, but forecast to come down, so I have planned for the possibility of having to go the long way, following the land as one would have to in a car. We've got this airplane this far, and I don't want any slips on the final leg.

As Lite Flyer climbs away from Fredericton, I put my socks and shoes on over wet muddy feet and then we exchange control and Lite Flyer does the same. Yeah, we took off in our bare feet with mud between our toes. I suggest that standard equipment on board in future might include a towel. We follow the highway towards Moncton. We can't get too close to Moncton, because the class E airspace around it is marked on the chart as requiring Mode C altitude reporting. Ever since we passed Space Coast, back in Florida, our transponder has only been putting out mode A responses. The best route doesn't really go through their airspace, anyway. I call them to let them know that we're out here and they tank me for the call but say we're nowhere near the control zone. We're not, it's the class E transponder airspace we're edging on, but they aren't interested.

So we fly. We cross the Cumberland Basin, where when I look at the water I see it isn't as inhospitable as the best available shore that has often been my "out" in a wheel plane. I admonish Lite Flyer that even if we successfully did a forced approach onto open water it could be a long cold, fingers-crossed wait for the Coast Guard to come and find us. I'm trying to keep my heart in it, not to let the little Rotax lure me into a false sense of security, but it just keeps spinning around without a hiccup. 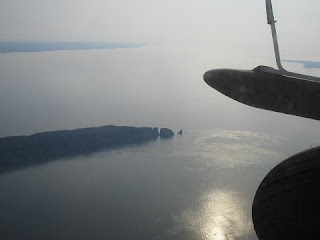 You can kind of see where continental drift has peeled Nova Scotia off the mainland and there are capes and spits of land that still reach out to the drifted land. We take advantage of them to fly the shortest overwater distance, even when we can see a nice straight line to the destination. I cut corners on the planned route, but don't cut straight across. I feel a little silly, actually, but not as silly as I would had I needed to explain to Transport Canada why I had landed an ultralight deadstick on Minas Basin. So we kind of arc around within range of land or at least of calm water and before we know it we are over land, within 20 miles of our destination. Not tonight's destination, but the destination. We've cut so many corners off the original plan that we are way early on our flight plan, so I call Flight Services. I further tempt fate by just giving our position and closing out the flight plan. All we have to do is find the airport and land on it.

I've been teaching Lite Flyer chart symbols, like the numbers that describe an airport on a chart. I tell her she can remember ELF to keep the numbers straight: the first number is the airport Elevation, the next is the runway Length, and the final number is the contact Frequency. I don't make it sufficiently clear that ELF is a mnemonic and she frowns, looking for the E, because she can see the L for lighting. I try to throw the extra L into the acronym , but she atches me and points out me that ELLF has too many Ls. I have to admit that she's right. In this case she reads off the aerodrome elevation with no problem then asks what the H is for. The US charts we've been using up to now don't use H. I guess all their runways are paved by default. "There's an 'H'?" I ask. "That means a hard-surfaced runway. I thought your airport was grass."

"Do you think there's a grass runway and a hard surfaced one?" It would be easy for her not to notice the paved one if they took off from the grass one. But it turns out she's never actually flown out of this airport, just came by to arrange hangar space.

This would of course be a good time to consult the CFS entry for the airport. Before take-off would have been another good time. This point in the blog entry would be a good time to admit that we don't have a CFS on board. I've let the GPS database lure me into complacency. Maybe I'm taking on the maverick ultralight lifestyle. What I really want to know about this airport isn't going to be in the CFS, either. I want to know local knowledge things like where the field is soft and where it's firm. All the little tricks of the field that Lite Flyer will know in a few months.

We call with plans to overfly the field at 1500' agl and check it out before joining a circuit to land. Another ultralight calls taking off on runway 07, at right angles to our path. Change of plans. We turn right and join downwind for that runway. It looks like a pretty good surface, although definitely grass, and I can see the grass has been mowed for two other runways, too. Like a big old military airport. There are trees and wires on the approach and while I urge Lite Flyer to descend I can remember how scary such obstacles were when I had as much time as she, but she does it, and turns in another greaser. "Stick back!" after landing, and we roll out on fairly smooth ground. I spy some dark rocky-looking patches that look kind of incongruous, but it's a well maintained grass runway with level ground under fairly dense grass. Some grass runways are pretty much mud.

I'm prepared to do a one-eighty and taxi back to the hangars we overflew on final, but Lite Flyer takes a right onto another runway. Why not, it's pretty quiet around here. I make an appropriate radio call and enjoy the scenery. If this runway deadends into long grass we can always turn around. We're burning less gas than a motorcycle just taxiing around here. That runway is less travelled, but also well mowed and packed firm. They must use a steamroller or something to keep these runways so flat. This runway meets another, running parallel to the apron, so we turn the corner and follow it towards the mowed taxiway onto the apron. And suddenly I spot the "hard surface." We're still taxiing on grass, but off to the side are traces of pavement. Pavement that is easily fifty years old. 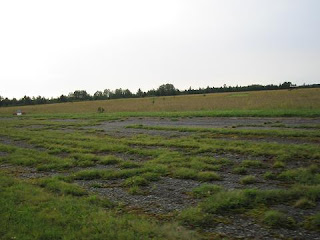 We turn off onto a mowed taxiway and then onto the grass apron, where we just shut down, not really knowing where to go next. Getting out, we discover we're parked in a swamp. Advantage of an amphibian: worst case scenario well just raise the gear and slide out. We're early on the ETA given to family, so Lite Flyer suggests we wash all the mud off the airplane and then take off again to make a staged arrival when family arrives here. There's a helpful local here to lend us a hose but as we wade around the airport it dawns on me. "This mud isn't from the river bank. That all washed off at take-off. This mud is from taxiing here. There's no point washing it off."

And then our staged arrival plans are thwarted when people start to arrive. I think they're just glad to see Lite Flyer in one piece and not too disappointed to have missed the actual landing. It just so happens that Friday night is the weekly get together of the local experimental aircraft club, so we're soon surrounded by not only Lite Flyer's Nova Scotia friends and family, but by a dozen people who are delighted to appreciate the new arrival on the field. We're amused by the old-fashioned division in the clubhouse, where the women sit around a table inside playing cards and the men sit on a screened porch talking airplanes. Lite Flyer and I drink champagne pose for photos with family and then join the men on the porch. We're completely welcome there, so I suppose it would be more accurate to say that the division is between pilots and non-pilots rather than men and women.

There are two days left before I have to report for work on my next job, and Lite Flyer makes sure I see the sights and eat fresh PEI mussels, scallops and Digby clams before I go. Lobster was suggested at one point but exhaustion had the upper hand and we called it a day. 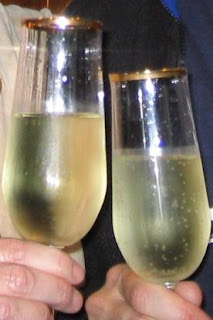 That concludes my side of the story. I know I left lots out and am watching Lite Flyer's blog to find out what the trip was like from her point of view. I may make one more post on What I Learned On My Summer Vacation with reflections on the overall trip, and what I might do differently another time. The remains of Hurricane Gustav reached Halifax the day after we arrived, giving us a grey rainy day for sightseeing, and Tropical Storm Hanna, which chased us all the way up the coast, arrived in Halifax about an hour after I left, pelting the whole region with heavy rain and high winds. The little airplane was safely in a hangar, awaiting a slightly overdue oil change.

Glad you made it to Halifax in one piece. It's disappointing that it was grey and rainy for your sightseeing. While there does tend to be a lot of those days in Halifax, it's a beautiful, walkable city.

Thanks for taking the time to "take us with you".
This was a fantastic story.

Too bad you didn't post a photo of you and Lite Flyer drinking champagne! :-)

Congratulations, and thanks for taking us along. I'm guessing this has been an XC to remember for you.

What a great story to have followed. Thanks so much.

I enjoy reading your blog, but this was definitely the most engaging story line I've read so far. Thanks for taking us along and I'm happy to hear that things were unusually stress-free for such an ambitious undertaking!

The US charts we've been using up to now don't use H. I guess all their runways are paved by default.

Thanks for the story, and the photos. I've got to do a cross-country like that some time.

Its a real pity that this had to come to and end, its like coming to the end of a really enjoyable book. Thanks for taking the time to blog about it, great read. Gabriel.