We Define the End of the Day

I bid farewell to the folks at W90 via Unicom, just in case they are monitoring it, and start watching for some slightly higher terrain. I'm thinking we might have to go around some hills, and this is Lite Flyer's first encounter with steep terrain, but it proves to be quite passable with good fields accessible everywhere from the 5500' cruise altitude we settle on. Our route mostly takes us down valleys between long ridges. Flying sure makes a person interested in geological processes. Can anyone recommend a coffee table science book on the formation of North American geology, kind of a Cosmos for tectonic plates, glaciers and sedimentation of ancient inland seas. The air gives me a vantage point that always makes me wonder, "How did that get like that?" Lite Flyer has the controls while I snap photos of this hill, that looks like it has a nipple on top. 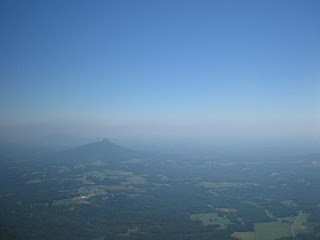 I thought I might be bored after so many hours at 70 mph, but I'm kept busy with wondering about the things I see, monitoring everything, and ensuring we always have a place to land. I spend some time teaching Lite Flyer things I'm surprised weren't covered in her groundschool, like the principle of the dual magneto. I know it won't stick all that well, because she's distracted by everything else around. I also ask her questions that I could answer myself, but which teach her to fish, and to know her own airplane. "See if you can figure out how to get the GPS to tell you sunset time around here," I suggest. Or maybe I just asked, "Will we get to our destination before dark?" I was aware that we had wasted all the time we saved with the quick mogas fill on chatting with people at the airport, and with our northeastern progress I really didn't know what time to expect sunset. The days get shorter quite rapidly approaching the fall equinox. We had broken skies above, so the sun's angle was not very clear.

She used the GPS manual and the menus to find the times the sun and moon rise and set, given in local times, an odd default, and then calculated that we wouldn't make our destination before dark. I had her choose a new airport, so I wouldn't blame myself if the hotel was a fleabag. She did a good job of studying the chart and recognizing that there was a bit of a gap, such that we had to either land here, or continue on for another hour. There were some airports in between but they were all private. She chose Hagerstown, which rested quite near the edge of a while circle on the chart. An almost blank white circle, 25 nm in radius like someone dropped a round spot of bleach on the chart. There are no hypsometric tints and almost no features shown within the circle. There is also an inner white circle of 5 nm radius. This is a seriously attention-getting way to denote restricted airspace.

I call flight services for information on our new destination. The briefer tells me he has an unopened flight plan in the system for our aircraft. This is puzzling, as I'm not filing flight plans. I'm taking advantage of the fact that the US doesn't require them. I'm really getting into this anarchic ultralight culture where you fix your own airplane at whim and fly where you like without talking to anyone. For emergency tracking purposes, Lite Flyer has a Spot personal locator beacon that shows where we are as closely as a flight plan might. I ask the briefer if a flight plan is automatically placed in the system if a pilot receives a route briefing and he says no. Someone has just been overly enthusiastic about entering data for our last briefing. He closes out that flight plan and tells me about Hagerstown. It has men and equipment working near runway 09-27, an unserviceable PAPI and some taxiway closures. The white circle is currently restricted airspace only within the 5 nm inner circle.

After the briefer has given me the information on my new destination he asks if there is anything else he can do for me. Yes there is. I ask if fog is forecast for the area tomorrow morning. It is, but it's forecast to lift by 7 a.m. Anything else? Yes there is. I ask him about the progress of the cold front. He says, "Now you're pushing it!" but lets me know where that is, as well. It's slowed down a bit, won't interfere with tomorrow's flight. I thank him and we flip over the radio to get the ATIS.

We're starting to suspect that our GPS-predicted sunset time is not accurate. The clouds still don't reveal the exact position of the sun, but it's not really looking like half an hour to sunset. I suspect that the GPS has given us the sunset in local standard time, when this state, whatever it is, is observing daylight savings time. That's a really stupid default. Whoever set it up to not default to zulu needs to have their hand slapped. How is a pilot supposed to know the local time observed over some random part of the world? It's been a fine day, though and although we grumble about the fact that I should have asked the briefer to confirm the sunset in zulu, neither of us proposes pressing on for another hour.

We're cleared to a downwind that has us flying towards the restricted area, and despite the fact that I know it currently only covers the inner circle, I'm careful to remain clear of the whole white blob. It's Camp David, apparently, where the President of the United States meets important visitors.

We land as cleared, accepting a hold short clearance. They want to know which FBO we want and just ask for something suitable for an overnight tie down for this little airplane. If I remember correctly that was the Ryder Jet Center. We're marshalled into place, shut down, and then they ask us if we have a tow bar. Of course we don't, so we just push the airplane to the tie down area.

I was glad we landed then, because I was already tired and hungry and we still had to get fuel. I'm tired now, too. Fortunately blogging is optional so I can pause here and wait until tomorrow to tell you about Captain Important and our stopover in Maryland.

Hey! You were in my neck of the woods! There's actually a restaurant that's sort of on the field at Hagerstown, so I'll have to wait and see if you ate there. I assume you kept clear of the ADIZ area, too-- if you didn't have a flight plan filed.

Wonderful! You're in my area too. I know that "nipple mountain". Did you go up the Shenandoah valley to avoid the ADIZ? That's a nice flight.

If you get near Lancaster there's a reasonable Italian restaurant on the field. If you land at Smoketown (near Lancaster to the SE), check out T. Burke's Amish Deli nearby - a short walk.

Locally the Camp David area is referred to as normal or "supersized". Before Pres. Bush it was always normal.

He goes up there mostly to goof off probably. Most of time he's up there there are no dignitaries in town and nothing official is happening.

We're not supposed to know his travel schedule, but anyone with access to NOTAMS can figure it out pretty easily.

Word to the wise: As of February 2009, the FAA is going to require ANY PILOT who flies within 60 nm of KDCA VOR to have taken training for "Navigating in the New DC ADIZ". That's the name of the course on the FAA Safety website www.faasafety.gov.

I love the contrast from W90. It makes me smile to imagine going into a fairly large towered airport with such a very light aircraft. ( LAHSO ... hehehehe, "sure, we can do that." ) I'm glad they're nice enough to marshall you to parking and treat you like a GV.

Looks like you're on the home stretch. I'm pulling for you ... in retrospect.

As far as a geology primer, well I'm sure you can run the Google as well as I, but how about:
Window Seat

Don't tell the two ladies about the great outlet shopping at Smoketown (and courtesy car). I'm not sure how much luggage space they have in the aircraft...

I prefer 'Capitan Importante'! Ok, maybe it wasn't me...

Window Seat is too lightweight. I'm looking for a much heavier dose of science than that.

It's not exactly a light read, but John McPhee's Annals of the Former World is basically a five-part, 20-year history of plate tectonics that also happens to be a geological history of North America.

It's a very good read, with lots of science.

Just the opposite of your request:
http://www.amazon.com/Landforms-Golden-Book-george-adams/dp/B000NZX8VU
"LANDFORMS: A Golden Book", one of the Golden Books pocket guide series. Simple yet very informative, small. I was surprised at the price, this is not a new book and probably been out and about, must still be in demand.

Get localized "roadside geology" books for specifics, there are some good ones for California.

The hill you show is the result of a higher tableland or mountain being eroded towards the surrounding level...unless it's being stripmined. Any lat-long so we can see it on camera and topo maps?

CBC's The Nature of Things has a nice geologic series, called Geologic Journey.
I haven't read it, but the scientific advisor on the show, Nick Eyles, has a new book called "Canada Rocks" that looks like it might be what you're looking for. (there's an excerpt available at the above link).

Now I'm waiting for the coffee table book of your adventures....