This morning the weather is worse, and is forecast to be that way for several days. The decision is made--and I say it that way because I'm not sure who proposed it, approved it or finalized it--to do the next scheduled maintenance here, ahead of time while we wait for weather. The two attempts to find our way through the big rocks put just enough time on the airframe that it is now eligible for an early inspection.

We move out of the rotting hotel and back to the original one and then see about where the airplane will stay. The FBO at PANC is convenient and well- appointed, but they have a lease tenant in their adjoining hangar, and the tenant don't want others using their hangar. At least that's what we infer from their $750 a day quote for hangar usage. Our engineer looks elsewhere and finds a hundred dollar a day hangar at a business at nearby Merrill field.

I go out to move the airplane the few miles between the two airports. It would almost be quicker to taxi down the highway to Merrill Field instead, it's so close. As I settle up with the FBO I pick up a copy of a memo to pilots on the state of construction. It explains what I already know from the NOTAMs and the ATIS, that runway 7R/25L doesn't exist right now. They've removed the signs and will not refer to the runway by name, instead just saying "Taxi through construction, Hold short of Runway seven left" when we cross its ghost. The memo is exceptionally clear, and they've even painted a line to follow through the construction zone. The controllers too are very clear in their phraseology. I would call it one of the least confusing pieces of airport construction I've had to navigate. I wish all airports worked half as hard to alleviate confusion during construction. 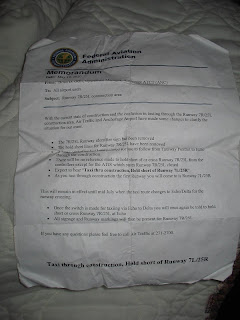 Still, not everyone has the memo. A Korean crew is cleared to "taxi through construction, hold short runway seven left" and reads back "taxi across runway seven left." The controller makes two attempts to correct the readback without success. The controller responds to the third incorrect readback, while the B747 trundles across the runway, with a resigned "whatever." He was smart enough not to star his take-off rolling until he knew he had the non-English traffic stopped.

The active runway, naturally, is the one pointing away from Merrill Field, so after takeoff they immediately vector me back towards the GA airport at 1500'. Once I confirm I see the floatplane crossing right to left, they switch me to Merrill Field tower, who ask me if I have received their ATIS. I didn't think to check if I could receive Merrill Field ATIS on the ground at PANC, and I certainly didn't have time to pick it up since takeoff. Merrill Field has their own set of construction NOTAMs, also turning their ATIS into the extended remix. So now. They give me the wind, runway and altimeter setting and clear me to the circuit.

I land and roll out, taking a left exit before I reach the construction zone, and then I call ground. They ask where I'm going on the field. I know the name of the company and have an approximate location plus a description of the hangar. I read the name to them off my OFP, and they give me directions right to the hangar door. There are some parking Ts painted on the ramp there. Usually you park an airplane with the wings over the crosspieces of the T, but they are marked with tall cones at the sides and I'm afraid I'll hit the cones with the props, so I shut down kinda sideways. The others have meanwhile driven over and are already here. So it really would have been shorter to taxi. We push the plane into a spot (it wouldn't have hit the cones), chock it, and leave it outside for the night. We have use of the hangar starting tomorrow morning.

Oops, put the wrong time on that one. Hope you haven't been pining for it. :-)

No, but sometimes I'm almost pining for the fjords.

ATIS recordings do seem to go on forever, especially at the bigger airports. I count it as a small victory if on approach I manage to get a perfectly timed clickoncom2 "..whisky"click-off telling me I don't need to listen to one I already have. It happens... rarely.

There was a Korean 747 south of the construction on 7R?

Anchorage's ATIS is waaaaaayyyy too long even when there is no construction. Pet peeve of mine, my view is that with all the relatively trivial stuff on the ATIS, your eyes glaze over and your more likely to miss something that matters.

This is recent phenomenon, not too many years ago, when the ATIS was actually a recording that one of the tower operators made, they were a lot shorter.

A Squared, you're right, that makes no sense. There's the problem of blogging from old notes. I don't remember exactly where the B747 was, just that he took three tries to get the taxi clearance readback right before the controller gave up and said "whatever."

Long ATIS recordings are a pet peeve of mine. I think I fly out of an airport with one of the longest broadcasts. In fact, I just wrote about it.

It's not just annoying -- it's a major safety problem in my opinion.

Yep, long ATIS are horrible. At EGGP, somewhere near the end the ATIS always says "increased bird activity on the field." It's not increased if it's always at that level!