Before he goes to the wilds of remote Alaska, the AME wants to buy some consumables that weren't worth hauling on the airlines, but that we can carry on board the plane for his use at destination. We still have a couple of hundred pounds of weight available and can find space to secure what he needs. The first one is easy, a couple of cases of oil. I start by calling the FBO to see if they sell it. They tell us to go to Wal-Mart. Wal-Mart, for aviation oil? Yes, Wal-Mart carries aviation oils. Who'd have thunk it. Unfortunately when we get there they don't anymore. They've just discontinued it. I'm sure they sold lots in this town, so I'm guessing head office didn't understand why they were carrying something that no other town's Wal-Mart had a demand for. Back to Merrill Field. I remember the store that sold charts also had oil.

When we get there, they have oil, but not our grade. There's an empty space where it should be. We ask if there is more somewhere, but no. The person in charge of ordering it has just returned from vacation. She recommends another place on the field, Reeve's. We recognize that name. There was an exhibit on them at the museum, lauding them as a one of the pioneers of aviation in the state. A piece of history. We find the establishment and inside see a couple of cases of W100 oil being used to hold up a boombox, so I told them we were here to buy a radio stand. There was apparently something wrong with those cases, or else the boombox was too delicate to use another grade of oil for its repose, because they went in the back and brought us two different cases of W100.

I told the man it was interesting to be here, seeing as they were featured in the museum and all, and I asked, did they still have 100 year old junk in the back room? There's some stuff no one ever throws out. It turns out that the business isn't exactly the one that ran the famous air service. The current owner, whom we're talking to, bought the name from Reeve, who was a good friend. He points out the window towards the building that housed the original Reeve's and acknowledges that it did have a lot of very old junk a hundred years worth of burned out pitted cylinders, expired survival kits, waterlogged kapok life jackets and the like. The museum was give their pick and most of the rest was finally junked. We come back again to Reeve's for miscellaneous things like oil filters and grease and the proper glue for holding on brake pads. Alaska is an awesome aviation city. You can get anything for airplanes here.

It looks and feels just like an American city, with all the same kinds of traffic lights and cars and everything. I suppose if the Americans built a moon base they would make it this much like home, too. I wondered out loud at all that stuff coming up the road from Canada, but it doesn't. Nothing comes and goes through Canada. The customs hassle is just not worth it. It comes by sea--the place isn't named "Anchorage" because it has such great airports, after all--or it is flown. If you're sending or receiving anything from Seattle don't bother sending it air: it has to go by air, even if you only pay for ground. Every once in a while the facade slips and you ask for something ordinary and it's not available, because they're out. It's a northern town after all, just doing a very good impression of being southern.

I write a thank you card to the brilliant and helpful controllers at PANC tower. Amusingly, this friendly note fulfills three of the USPS nine criteria for suspicious letters, four if you count the shape being unusual for a business letter. I hope they read it and didn't take it out to the range and blow it up. 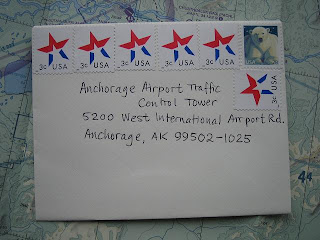 Oh and at some point earlier in the week I got fed up of not being able to get prognostic weather charts of the area and called a 1-800-WXBRIEF for a US flight services briefer, to ask how to find Alaska on the ADDS site. The answer is that it's not on there. Alaska has its own site. I don't know why. And if that site isn't nice enough for you, they are migrating over to this site. Possibly both those links will go the same place soon. That's strange that a single state has a separate website when the rest of the country has one integrated one. You can get the METARs and TAFs for Alaska by typing them in at the prompt on the regular site, but not the graphical information. Hawaii has its own site, too. I'll bet Hawaii has many of the same problems Alaska has, related to isolation and not being included as a real state. Hawaiians don't have the problem of dying of exposure if they pass out drunk, though. And the sun goes down at the same time every day there. Goes down in like five minutes, too. It's freaky. I guess if you're from Hawaii and come north you get freaked out by the fact that the sun is just hanging there, not down yet, even though sunset started forty-five minutes ago. Is the sun stuck? I love the world.

Then we're driving out to the airplane with two pick up trucks full of gear to load. This is just like old times for me. And I have the precious, precious tie down rings. The first load includes a solar panel. It's in a wooden box, which is bulky, and they say we can take it out and leave the box if we want, but the box has handles by which it can be secured, and will protect the panel. We put most of the awkward to secure things in the wing lockers, but we can't do that with batteries. Those must be in the cabin so if there's a fire we can fight it. Make sure we have our letter of exemption for northern dangerous goods carriage. I doubt it would be asked for up here, but you never know. I feel like I work for a living.

We're going to have to figure out where to stow all this stuff, so I say anything that can sit in the rain (of course it's raining), just put on the ramp. If it can't get rained on, we'll put it straight inside, to be juggled later. Do you have another box you can put that loose stuff in? They do. Excellent. The clients go back for a second pick up truck load, and then call to ask if we can wait forty-five minutes to an hour. Something came up.

When the second truckload arrives we start loading in earnest. It's like a wacky game of tetris in the rain, except even if you get a whole row loaded perfectly, it doesn't disappear. Just as well. Some of it is expensive gear. When it's all on board and secured it doesn't look pretty, but we know it's not going anywhere. I take a few photos so I can remember where everything is when I double check the weight and balance later. Our engineer trying to psyche us out out by asking if we're sure the load is safe. We just elbow him.

Back at the hotel there's a power failure. Ten minutes dim and then back on, but the internet is still broken. Another sign we are in the north.

We go for dinner at the Century, a hotel right at the end of Lake Hood. We can see the airplanes landing and taking off from the tables. We get to chatting with two women at the table behind us. They shriek and shudder when we tell them where we're off to tomorrow, and warn us about our destination, asking if I am the new teacher. Apparently the last one was eaten by bears. They also tell us that it's legal in Alaska to grow marijuana for personal use. They deny on both counts that they are having us on. No wonder the rest of the USA forgets their existence.

The web seems to say it was wolves, not bears, that ate the teacher.

As for marijuana, there might be a subtle distinction between "legal" and "not criminal", but as long as you have no more than a couple dozen plants (and you don't have a special building for them) or more than an ounce, you're okay. Just don't sell any.

According to Reuters: "... a 32-year-old teacher and avid jogger who traveled to several rural schools in Alaska, was found dead on Monday along a road near..."

You may want to be careful where you go jogging...

The blogging lag lets us know she either survived or avoided the place whose name elicits a cringe from the natives. It's like an episodic television show where you can be confident the hero[ine] will be back next week. We don't have to worry much about the engaging narrative taking a nasty turn. If disaster strikes, it probably won't be in the near-past storyline.

Anyway, it seems the wolves generally don't go hunting joggers once summer comes around and they can find more appropriate food. The teacher was just in the wrong place at the end of winter.

It looks like they've already transitioned to the new site. There's now a link to the old version of the site.