I had a kind of ear block this morning. Not a really serious one that would prevent me from climbing or descending in the airplane, just water in my ear in such a way that sounds all came through glubbily. I tried tilting my head all different ways, and lying down. I tried putting my hand against my ear like a suction cup. I even tried having a shower and getting water in the other ear to match, just to balance things out. So I entertained myself by making foghorn noises, which sound much more realistic through my blocked ear, until finally I tilted my head or wiggled my jaw the right way and it came out. No more foghorn noises. Damn am I easily entertained!

After breakfast I went to help out with the airplane. The hangar belongs to a family-run engine overhaul shop. They usually receive engines in boxes and ship them out again in boxes, so they rarely have airplanes in the hangar. The hangar area isn't a lot larger than our airplane, so we are kind of in the way, although most of the people working are in a couple of shop areas and not in the actual hangar part.

As semiskilled labour, we pilots help out the AME as he needs, and otherwise work on cleaning the airplane. First we unload the cargo into an organized pile on the floor of the hangar, so the AME can get inside to the cabin and cockpit, and so the airplane can be raised up on jacks later.

We take off the cowlings, which means disconnecting the cowl flaps, turning some screws to unlock the top from the bottom half of the cowling, then removing all the twenty-dollar (not kidding) screws holding them on. Then you try to wiggle the cowls apart, and only then do you remember that there are some hoses that connect to apertures in the cowls and the hose clamps need to be loosened to disconnect them. Then you can wrestle the cowls off the engines and set them aside.

Next we're handed screwdrivers and asked to remove all the access plates. The usual way I like to do this is for each plate, remove all the screws but one and then loosen the last screw so the plate swings out of the way without being completely removed. The removed screws get collected in a container. Some AMEs have containers available for this purpose, but if they don't I cut the bottom out of an empty oil bottle and use that for a receptacle. Some people just pile the screws on the wings or on the floor near where they came out, but I disapprove of that. The airplane is not a table, and that's a good way to lose screws.

Some of the screws are stripped, or in very tightly or both and I can't get them out. If it's just one stuck screw in an access plate, I make that one the one that stays in, and work around it. Or I just say "I can't get this one" and move on to another. It's the AME's job to know how to fix this problem, even though it's probably some pilot with an electric screwdriver that wrecked it in the first place.

When the access covers are all open for inspection I start scrubbing the outside of the airplane. There's oil under the flaps and nacelles and heater soot on the fuselage. Neither is easy or fun to remove. I fantasize about something I could just spray on the airplane and then wipe off leaving the airplane clean and shiny underneath, like in an oven cleaner television commercial. except with an airplane and not an oven. The oven cleaner stuff might do the job. I'll bet it's not approved for use on aircraft aluminum, though.

The people in the hangar are very friendly to us. They don't have a hangar cat, but here is a beautifully trained hangar dog, whose name is probably in a different notebook. 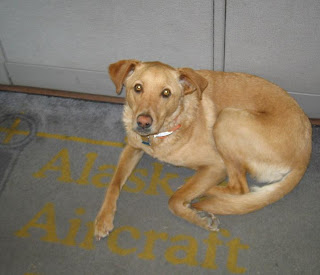 When I went to save the websized photo to my "posted" folder there was already a copy of the identical photo, just cropped slightly differently, but I don't remember posting it. Sorry if it's a repeat. But he's a nice dog and deserves an encore. On the subject of misplaced photos, I write blog entries off line and then copy them into blogspot when I have a good enough Internet connection to do so, so when I intend to illustrate an entry with a photo I just put a note where it will go. So if I refer to an image or you see text like [airplanepic.jpg], please remind me in the comments to post the actual image.

P.S. I didn't forget the hint for yesterday's photo. And the person who had insider information amounting to the hint did get the right answer.

Email ThisBlogThis!Share to TwitterShare to FacebookShare to Pinterest
Labels: maintenance

I'm not sure if you know this, but there is a wonderful solvent to be used when cleaning oil and soot off of airplanes. Its called....Avgas! One of the myriad things learned one cold and rainy day when dispatching was that nearly any part of an airplane can be cleaned with avgas. Spray it on, wipe off the grime, it doesn't even harm the paint...I think. It's particularly good at removing the oil/soot streaks on the bottom of a C152 when someone has overfilled the oil and the breather has puked it out all over the belly. Great stuff! Do wear gloves though, you don't want to give yourself lead poisoning from Tetra-ethyl lead.

Given all of the boxed engines coming in and being tested, they clearly would have at least one test bench, so it looks like A Squared has it, or at least has me convinced.

I recently found a cleaner that removed two years of exhaust grime from the bottom of my Cessna R172K. It's called "LA's Totally Awesome All-Purpose Cleaner". It works great on the entire exterior of the plane. However, it is recommended that it not be used on glass. The cost? $1.00 at Dollar Tree or a similar store.

You should give it a try.

Oven cleaner has a Ph of around 13, and aluminum reacts very readily with alkaline solutions. Liberating lots of hydrogen gas.

I was kidding about the oven cleaner. But you know the commercials I'm talking about? That's my fantasy to get the airplane that clean.

There's a product called Swim-Ear or Auro-Dri that will help with water in your ear. It's a very dilute alcohol solution. Put a few drops in your ear and it mixes with the water, cutting its surface tension and allowing it to flow out more easily. Best of all, it kills any bacteria in any remaining water, so that even if you've been swimming in non-chlorinated water like a river or lake, you won't get otitis media (swimmer's ear), which is unbelievably painful.

@Trix - The one with the mother int he pink dress, imaculate house, perfect makeup and high heels cleaning the oven? In one wipe with a sponge?

I had fun reading all about caustic soda aka lye aka sodium hydroxide. I remember seeing little flecks of what looks like aluminum in Drano, so I was wondering what the effect of oven cleaner would have on aluminum.

And no way I was going to post something without researching it first. Not with your crop of readers.

Not with your crop of readers.

Aren't they amazing? I feel honoured to hang out with them.

That's because you're an aviation geek magnet.

As I recall - the only unsolved mystery in the "It's an engine test stand" camp related to the scat tube and the defrost switches. I'd guess that the control panel for the stand is inside a cabin of some sort to protect the operator from the noise etc... and this uses engine heat? (or?) to keep his observation window clear.

gmc: I don't know more than I showed, but there are more pictures on the next post. I'll see if any show the routing of the tubing well enough to answer that question.