The next day we load the airplane with our personal gear, cursing as usual the paucity of tiedown points in this thing. Once everything is packed and secured, I call the customs broker to tell him we really are going today. He's used to our 'hurry up and wait' schedules, but now the US won't let us postpone arrival permission from day to day, so he can't file the paperwork and let us catch up to it anymore. Everything has to be done the same day. Good thing I called, because a pilot switch means he doesn't have all the current details on my coworker. I grab his passport out of his bag and provide the broker with the relevant details, and with an estimated time and place for our penetration of US airspace en route. I have to call him again from Whitehorse to get a fax sent to the FBO.

It's very weird for me to be going north across the border to the US. I'm used to going north out of the usual infrastructure of Canadian life. And I'm used to going south across the US border. I'm afraid I'm going to forget some basic rule of going to the US, just because I'm going the wrong way. To me the US being "south of the border" is as cliched as Mexico is in the US. I just received an Aeroplan e-mail that starts "Want to take flight south of the border? Treat yourself to a 10% discount with Aeroplan." It's valid for any flight to the U.S. Imagine if Mexico had a part that was right in the middle of Kansas and that's how disorienting this is.

We take off and fly north, or actually mostly west. It's almost due west by the compass, because the magnetic variation is 21 degrees here. The weather is spectacular in BC and the Yukon. I follow on paper maps to identify the mountains and lakes. We're coming up on Whitehorse, but we're almost parallel to the BC-Yukon border, converging very slowly. We'll cross it just shortly before reaching Whitehorse. 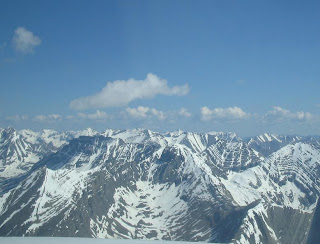 I have a memory of there being something irregular about radio procedures in Whitehorse, but I search the CFS and can't find anything odd. I tune the tower a long way out to get situational awareness coming in. A pilot on frequency position reports "coming up on Lake Leberge" and I freak out. No, not because he's at our position and altitude, but because he's on the marge of Lake Lebarge. My innocent crewmate is 'treated' to a sudden Robert Service recitation.

There are strange things done in the Midnight Sun
By the men who moil for gold.
The Arctic trails have their secret tales
That would make your bllod run cold.
The Northern Lights have seen queer sights,
But the queerest they ever did see
Was that night on the marge of Lake LaBarge
I cremated Sam McGee.

I would have gone on, but mercifully I didn't know any more by heart. I resolved to rectify that at my earliest convenience, but I think that's after my other resolutions about running, simming and building a solar-powered hovercraft, so don't ask me about it soon.

Except for poetic outbursts, descent into Whitehorse is routine. The field is easy to spot and we're sequenced number four for landing, behind a Convair, then resequenced number four again after the first guy lands, because a faster aircraft turned up to fill in one of the gaps. Pretty adept work for what I believe is a non-radar tower. As we exit the runway, on a cross runway, tower asks us where we're going on the field. I say something like "Looking for avgas" or "to refuel" and we're given taxi instructions up a hill. Just when you think you're at a modern airport. At the top of the hill is a little charter operation, or maybe a repair shop, but nothing that looks like a fuel pump. We wave off the marshaller, do a very awkward one-eighty and call back ATC for clarification. They confirm that there is no fuel up here. Whatever I said coming off the runway sounded like the name of the company based up that hill. we taxi back down the hill and across the cross runway, and park where we should have gone in the first place.

We go into the FBO and ask about fuel. It will be about forty-five minutes, because the fuel truck, just went up the hill to fuel a charter fleet. We pick a safe estimated time of departure and divvy up duties: I'll take care of customs and fuel while he does weather and files a flight plan. I also get their fax number and permission to receive a fax. He calls 1-866-WX-BRIEF while I call the customs broker and fill out a fuel order form.

The fax is several pages of all the dirt US customs wants to know about us. I page through it to make sure everything has printed properly and there aren't any glaring inaccuracies. They spelled our names right, anyway. The fueller arrives ahead of schedule and I direct him which tanks to fill, then sign his paperwork.

There are a lot of other aircraft around, some military, I didn't notice whose, and a small fleet of firefighting aircraft from Saskatchewan. They've been working in Alaska, helping to fight forest fires. I didn't know we gave international aid to the Americans. I wonder if the Americans chartered the Canadian firefighting capability, or if there's simply an international agreement and we come to each other's aid in the burning forests. Probably the former. I'm such a communist to think of the latter. 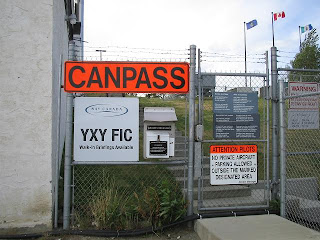 The other pilot, he's the PIC on the customs paperwork, comes back with an 'everything old is new again' discovery. He says that when he called Flight Services they said, "Why don't you come on over?" and they gave him a face-to-face briefing. He's exhilarating in the experience of being right there with a briefer who could point at things on weather charts and at how much easier it was to get a complete picture of the weather. He's too young to remember that that was the way things used to be everywhere. They didn't have GFAs back then, and I don't think the satellite imagery was as good, but it is a good feeling to have an in-person weather briefing. Especially when it was that same person that you were talking to on the radio as you taxied out for departure. The weather is low on the south route, so we'll have to follow the Alaska highway and then cut south down the valley to Anchorage. That makes the trip a bit longer, but within our contingency planning. Also the Alaska-Canada border at Beaver Creek doesn't count as ADIZ, so we don't need to worry about being super accurate with the crossing time.

I call US Customs in Anchorage with our recalculated ETA, and to ensure that they received their share of the paperwork. You'd think this could all be more automated or less labour intensive, but when your dealing with international travel nothing is predicable enough not to worry about. In this case the Americans are ready for our arrival.


Also: I'm looking for someone who has easy access to CYPK who could do a fun favour for me in the next few days. Please e-mail me if you think you could.

All this flying to Alaska thing is a blast from the past for me, reminds me of the time that my father wanted to fulfill his lifelong dream of driving the Alcan highway, and only my sister and I were too stupid to say no thanks. Edmonton to Anchorage -- Whitehorse was a *lot* of civilization on the way,

A walk-in briefing! How exciting! I would totally want to do that. It's so hard visualizing all the info over the phone, I'm not much of an auditory learner :)

I would email you about the YPK thing but I won't be there for at least a few weeks :( sorry.

I don't know how it's organised, but Australian firefighters often go to the US to help out, and vice versa.

I think Blogspot has a cool new feature. When I moderate comments--as I do with comments on posts over a few days old--I now have the option to mark them as spam instead of just refusing to publish them. That's not the cool part. I saw in my inbox this morning that I had a new spam comment on this post, but when I came here to moderate it, it didn't exist. I infer that if enough people mark a comment as spam, Blogspot automatically deletes it from everyone's blogs.

Nice, but the effectiveness will decrease as 1) more people rely on it, decreasing the pool of moderators and 2) spammers adapt to be more insidious.

"On the Marge" triggered the Lake LeBarge poem for me instantly. I first read it as an eight-year-old visitor to my grandfather's workplace (a stationery factory). I learned it reasonably well hearing it recited at campfires every week by an old Boy Scout camp leader the year I spent working at the waterfront.

I recently obtained a book of poetry which includes a science fiction treatment of the poem. I wouldn't be surprised if you have a copy too.

Actually, Aviatrix, it looks quite likely that they're using Bayesian filtering or something similar for the spam, and you're actually training a computer "moderator" to distinguish spam from ham. These sorts of filters can be surprisingly effective, and although spammers do change their tactics to get around them, forcing them to do more and more work to keep getting past filters increases the economic pressure on them to go do something else.