The next day I pick up the weather by telephone and am a little late meeting the others in the lobby, as I got one of those briefers who insists on telling you about every unlighted tower all the way from origin to destination, even though it's a daytime flight. I guess if widespread darkness were cast upon the land due to a volcanic eruption, and we therefore diverted to Takla, and decided to do this at 300' agl, I'd be very grateful to know about that 305' unlighted tower eight miles SSE of the aerodrome. But as it is I'm happy to have the weather, which involves the remains of a cold front until about Watson Lake and should be good thereafter.

There is a small fuel stain on the ramp. It's a known time-to-time problem caused by a valve connecting one of the auxiliary tanks to another tank, which is full. It appears that the valve sometimes doesn't seat properly, so the fuel drains from the aux tank to the main tank and then leaks out the main tank vent. The engineer makes a sound of frustration. He wanted to fix it but as he says, "for two days in the hangar it didn't leak!" It's not a safety problem for us and it doesn't cause us to lose fuel in flight, because the rate of accidental transfer is far less than the fuel burn from the destination tank. The fuel level in the aux tank doesn't even appear any lower than it did before maintenance.

Everything is still normal on the runup, so I taxi out and take off. I can feel the airplane being at max weight. At the proper speed I rotate to the correct take-off attitude, and the airplane rolls along on just the mains for a moment before it rises off the runway.

We took off from runway 26 and my heading to Whitehorse is 269, so I make that slight turn on course and continue the climb straight ahead. The magnetic deviation is huge here, 22 degrees east, meaning that in order to fly northwest with respect to the globe, we fly due west by the compass. I keep poking at the GPS to catch the moment when we have crossed the 60th parallel to the Yukon, but the clouds draw in beneath us so I can't see the eskers. I let the non-flying pilot take photographs for me.

The highest mountains along our route peak around 6000', but there is still snow along all the mountain ridges. We pass Watson Lake and then the clouds thin out as promised.

Whitehorse has a tower and an FSS, but no ATIS. By listening on frequency we learn that arriving aircraft pick up weather and traffic avoidance from the FSS until they are close enough to contact tower, and then are sequenced. There's a little runway 19 and a parallel set of 13/31 L & R. The wind is from 190 at 15 gusting twenty. We are initially sequenced to join left downwind for 13 right, but despite having looked it over, I screw up the arrival. There's a mountain where downwind should be, so the local procedures are to fly a very tight downwind inside the mountain and then teardrop out or fly extra long to turn back for the runway. I understand the arrival diagram as being over the lake and river, but try to leave myself some room for a proper circuit and arrive in the zone on the wrong side of the mountain, so I have to cross over it before descent to circuit altitude. They have a Jazz CRJ ready to taxi, so out of wariness of my unpredictability, they sidestep me to 13 left where I can be as slow as I like without interfering with the jet departure.

I get myself on the correct side of the mountain, turn final and land. The crosswind is, as usual, not an issue in this airplane. It would be much more exciting to land a little single in a 15 kt crosswind. I roll out and they give me the backtrack, hold short 19. There is no painted hold short line, but I stop well short of the crossing runway and watch as an amphib Cessna lands in front of us.

Now I'm cleared to taxi up 19, hold short 13R. The Jazz is ready to go now. I make the left turn and come to a stop for the yellow line, then realize that the yellow line I have stopped at is a dashed line with a solid line behind it: the hold short line for traffic waiting to cross 13L, the runway I've just come off. The hold short line with a solid line and a dashed line behind it, for 13R, is still ahead of me. I start rolling again, then see that the Jazz is rolling now, so stop where I am. The pilot doesn't need to see an airplane moving on an intersecting runway during his take-off roll.

When the Jazz jet is gone I'm cleared across the last runway and to call ground, who direct me to transient parking near the tower. When I turn on the phone to call the flight follower I get a text from the pilot who will be replacing me, with his hotel room number. I text him back and then we haul our personal gear out and lock the airplane. While we are waiting for our cab we meet the family who was in the C185. They're travelling around all over BC and the Yukon. I'll have to come back and see some of these places someday. 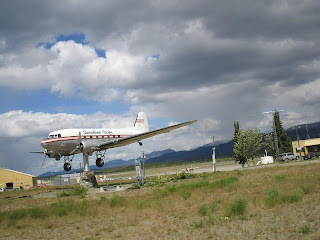 Oh and you can't talk about YXY without mentioning the wind direction indicator: outside the airport there's an entire DC-3 on a pylon, free to rotate with the wind.

Whitehorse has regular windsocks too. If this one were lighted (I don't believe it is) it would be legal as a wind direction indicator in Canada, though.

It DOES rotate into the wind, though.

Slap a couple Turbos on her and she would even look like a 748. An excellent example of a true workhorse of the north.

If you're looking for some good, free exercise in Whitehorse, try climbing the staircase from town to the back side of the airport.

What did the DC3 do to deserve that?
Will it scare away others, like a dead thief swaying on the gallows?

We've got an airplane-on-a-stick as well!

Interesting approach. Is this described in the Canadian equivalent of the AF/D for YXY?

We are initially sequenced to join left downwind for 13 right ... so the local procedures are to fly a very tight downwind inside the mountain and then teardrop out or fly extra long to turn back for the runway.

And I am always wary of hold-short markings between parallel runways. At STP, there is a ludicrously small space between rwy 31 & rwy 32. I doubt there is room for anything bigger than a Cessna here

Is this described in the Canadian equivalent of the AF/D for YXY?

Thanks for the link. It's the first time I've seen the Canadian approach plates ( there's no online source for current ones as far as I know. )

I .. realize that the yellow line I have stopped at is a dashed line with a solid line behind it: the hold short line for traffic waiting to cross 13L,

Yes. The part that confuses me about the STP case I mentioned is the lines are in the other order. In other words, you get to the line-you-must-not-cross before you get to the line-you-must-cross to clear. The way out of this dilemma is you're supposed to listen carefully to tower, who will either tell you to cross the other rway, or hold short without really clearing the one you landed on.

Wow! Love the DC-3
There was one on a stand at the airport near here (sort of like a VERY large airfix model)

Alas, it has just been taken down due to being so rusty inside that it became a "safety hazard"

As a small aside, in the picture posted by IFR Pilot, what's the track up the right side of the staircase for? Assume it's some sort of accessibility lift?