Happy Canada Day. Having told you were I am this week, I might as well show you around Fort Nelson. It's raison d'être is its position on the Alaska Highway, 400 km north of Ft. St. John, and its being an base camp for oil and gas exploration. The full time population is probably close to half and half native/non-native. The transient population is a combination of young white males driving pick up trucks, and retirement age white couples driving motorhomes with American licence plates.

The highway runs right through the middle of town, paved, with a paved service road each side. There's are a couple of traffic lights with pedestrian crossings down by the plaza where city hall is, but in front of the hotel to cross over to the restaurant there's just a sign indicating a pedestrian crossing. Drivers are pretty watchful, usually stopping to let me go across. It's a hard road to drive. We've met two couples so far who are stuck here because of problems with their vehicles. One had so much rock damage to the windshield from the highway that they have to wait for a windshield replacement to be delivered from down south. Another couple were coming out of a gas station and were hit by a crazy local driving on the wrong side of the road. Both are injured and their vehicle damaged.

There are about six cross streets, two converge half way to the airport and the others I think just peter out at the top of the hill as they run out of trailers parked beside them. There's a hospital, halfway up the hill, and for some weird reason the street behind the hospital is littered with condoms. Who goes to "park" behind a hospital? The other side of that street is a normal residential street like any other in town, so it's not like it affords any privacy. There are plenty of more cloistered areas to park within a few blocks. There's even a the "Community Forest" a once-logged area on the northwest of town with marked walking trails through the regrowth. Maybe the hospital gives out free condoms and people just can't wait? Who knows. Another mystery.

There are two grocery stores, a post office, an RCMP station and some mini strip malls, but few chain stores like a Subway (sandwich place) and a Northern Store, with dreary lighting and merchandise, but very friendly service. The little stores are mostly independent, many of them with hand-lettered signs. They contain a mixture of what you need living up here and what people can sell to the Americans passing through to Alaska, like snacks, small toys, car games, and magnetic ribbons. Businesses tend to be pretty versatile. One store is a combination Rock Shop (i.e. cigarette lighters and t-shirts with heavy metal band logos on them) and used bookstore (mostly Harlequin romances and blockbuster spy novels). There's a guy with a trailer full of freezers selling various kinds of fish, including "N.L. COD." The intended audience knows what that is. Check out the products and services offered by the store pictured. There are quite a few places like that. "And you also sell WHAT?" 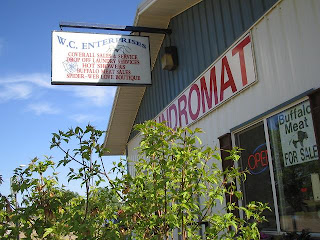 Although a lot more of Canada is "North" than of the US, I think far more Americans go to see their north over the course of their lives. Firstly it's a dream or a goal for a lot of people. They know where to go: Alaska! You can drive up one road and see the highlights. A Canadian who wanted to see the "North" wouldn't know where to start. And the Americans have a road. The Canadian arctic requires aircraft and a big budget. Check out this amazing national park. be sure to click on the "How to Get There" link. There's no roads, no boats, no trails. It's a $15,000 charter flight. Each way. And that's from Resolute Bay. It's probably another $2000 to get to Resolute Bay from somewhere in the south. That's not something that you can load up the kids and dogs and go do one summer instead of Disneyland. It also requires advanced camping and wilderness skills. Of course a Canadian could always go to Iqaluit or Churchill, or take a tour, and many do, but it's a specialty thing, not a cultural icon. Canadians don't make a tourist pilgrimage to explore as far north as they can drive, because they just get to smaller and smaller places with poorer and poorer services until the road ends at some place most people haven't even heard of. Or maybe they end up some place in the oilfields that isn't exactly a tourist destination.

Or they could get this place. The next place along the highway as big or bigger than this is Whitehorse. That's worth seeing, and a worthy destination. After a few more small places you're into Alaska. Best of luck to everyone driving up there. I bet there's a lot of stories of people who didn't make it all the way.

It wouldn't be expensive to get to the north in a private plane from Ottawa: an easy flight to Moosonee, then airport-hopping up either side of James Bay and Hudson Bay.

The problems are (1) time and (2) food. I understand that the north is a particularly bad place for vegetarians.

Happy Canada Day Aviatrix! Sorry to hear you won't get to spend it somewhere better than YYE.

Very little to do in Fort Nelson except drink at Dan's Place. That highway sure is hard to cross when sober, let alone when you have a load on.

Spent a week in Dan's with some other crews waiting for the wx to break, which it did the day after we went home. I hope you have better success and some good company to pass the time with...

It's raison d'être is its position on the Alaska Highway,

FWIW, Fort Nelson was a stop on the Northwest staging route, before construction began on the Alaska Highway. The first time I was there (1993) the hangar from the lend-lease days was still standing.

I'm betting that the RCMP could tell you what's up with all the condoms in that particular area. And I'm betting that it has something to do with the 'oldest profession.'

It wouldn't be expensive to get to the north in a private plane from Ottawa:

You might want to check the price and avaiablity of fuel for transient aircraft in the area before you decide whether or not it's expensive.

Buffalo meat and hot showers all under one roof. Who would've thought? And what's a "spider-web love boutique?" or should I not even ask?

Thanks for the warning, A Squared. The advantage of a little plane like the Warrior is that even expensive gas isn't *that* expensive (I've paid the gas prices at Teterboro, for example, but even $10/gallon or more would be far below the costs Aviatrix lists). Availability, of course, is a different question.

Perhaps I'll call a few of the northern airports and add the gas prices to OurAirports.

Happy Canada Day, Aviatrix. I read an opinion piece in the NYTimes this morning called "Our True North" (http://www.nytimes.com/2009/07/01/opinion/01canadaday.html) -- not particularly relevant to your post, but interesting nevertheless.

There is Avgas in Moosonee, but I don't think there is any fuel for purchase between there and Fort Severn, and I'm not sure about Fort Severn. Even if it does, that doesn't even get you to the 60th parallel.

On the other side, I don't know that Eastmain or Waskaganish have any fuel services, and even if they do, that's not going to get you all the way to Baffin Island.

You can get up through Sasakatchewan via La Ronge to Points North Landing, but I don't think a Cherokee could make Rankin Inlet or Baker Lake in one shot.

Your best bet for the Canadian North in a small single is probably Alaska Highway to Whitehorse, and then see what you can arrange between there and Tuktayuktuk. Old Crow? But you'd need something sooner, I'd think.

The first thing that went through my head was a bunch of interns standing on the hospital roof having a target/distance competition using condoms as projectiles. (I've been in the same room as someone watching the TV show "Scrubs" lately.)

Aviatrix: thanks for the warning.

Looking at the map, Moosonee to Fort Servern to Churchill to Rankin Inlet has easy Cherokee-sized legs, if Fort Severn actually sells 100LL. It's scary, though, to have no alternates with fuel along the way -- I can imagine having to leave the plane at some gravel strip for a couple of months until someone ships in a very expensive barrel of 100LL for me.

Do all the bushplane ops and local pilots use private supplies of 100LL up there?

There were a couple of episodes of "Wings Over Canada" about the owner of an N registered Money with ferry tanks installed. In one he and a friend tried to get to the North Pole. They did as much pre-arranging of fuel as they could but then only used half the range the ferry and main tanks gave them on each leg. I forget where they fetched up, but while they found fuel to buy (in drums) it was buried under a huge snow drift and they couldn't find it to dig it out. They still had half fuel and were able to fly back south. Quite an adventure, as was the other episode, but that is another story.

Northern operations are hub based, so you leave the company base to go to the unserviced remote strip, and while you might make a couple of stops, you almost always return to company fuel. Exceptions are if you go south to where there are roads, you fuel up on cheap southern fuel, and sometimes private customer airstrips have locked fuelling stations where you have the key or combination. Sometimes you just sign on the clipboard what you took and they bill the company.

If you get stuck somehow, say having to turn back in weather and exhausting your reserves, someone else can tanker fuel for you.

Yes, there are fuel caches left by other companies, and sometimes you can get a good deal on the fuel there (but probably not for one barrel) if a project ended and they didn't use it all. And yes, the looking for drums in a snowbank problem is a recurring one. You can lose a whole building in the snow if it's at the wrong end of town.

The first time I went up north, I asked in innocence, "how do you lose a sixteen foot long piece of twelve-inch pipe???"

The answer, of course, was "in a snowdrift" - and I learned just how much more could be lost in a snowdrift while I was there...