Our destination in Alaska is in the vicinity of a town called Deadhorse. To my amazement Deadhorse is a proper town, not just an Indian reserve. There's even a road all the way up, and it's paved in a lot of places. Tourists go there. It isn't decided yet whether we will stay in Deadhorse or at the customer site at a private strip, or at some other mosquito-infested hellhole.

I e-mail a pilot friend who lives in Alaska, to warn him of my possible arrival and see if we can coordinate some sort of meeting on my way through southern Alaska. It turns out he has worked out of Deadhorse, and he sends me more information than fits on my tiny iPod screen about the airport, the town, the weather and the available diversion aerodromes.

"What's there to do in Deadhorse?" I asked.

"Eat," he said, then added a number of tourist quasi-attractions, like trying to get to the beach (should be almost completely ice-free this time of year) despite the fact that the shore is chock-a-block with oil companies hunkering behind paranoid security.

I had already noticed that northern Alaska had two sorts of June weather: when it's not IFR in 300' ceilings and rain, it's IFR in fog. My friend claims that there a third sort of weather, in which it's actually possible to fly VFR, but that it was frequently and rapily replaced with one of the other sort, hence the need to be familiar with all the possible options.

Deadhorse has a long, paved runway. Most of the other options in the area don't, so my friend has the skinny for me on which would give me access to telephones, lodgings, roads and other luxury amenities, should I happen to land there. One he describes as "... abandoned and not maintained ... it would make a better place to crash than out on the tundra someplace." Then he reconsiders that last and points out that whether it would be better to try to land there versus being "quietly and inconspicuously dead in some out of sight place is a personal value judgment that I can't make for you."

I write back and tell him that the last-mentioned abandoned and not maintained strip is the one our customer wants us to use.

He offers his condolences and amends, "If you're going to be based out of there, you can disregard all my previous suggestions for entertainment. The new list is: Swat mosquitoes, watch the river go by, swat more mosquitoes."

This strip does have a road near it, and we have some support crew going up there this week so we'll ask for photographs of the runway, and get them to walk or drive it to report on the surface condition.

Also I discover that the quasi-on state of my dead computer does not supply power to the USB ports, so not only can I not buy software for my iPod, I can't recharge it, either. I'm guessing that there is a low tech solution to the latter problem. I go downstairs to the hotel desk.

"May I please look in the box of chargers and cords left behind by previous guests?"

Every hotel has one of these. I learned about it when a coworker who checked out a day early phoned back to get us to ask at the desk to see if they had found his phone charger. If you need a telephone wall charger, just go to your nearest hotel and ask. As the woman at the Super-8 put it, "If you see anything you can use, just take it: it's better than it going to landfill." This box is well organized: each item is coiled up and held with a rubber band. The first one I saw was a single tangled mass of cordage. A first inspection of the box shows no Apple-white cords, so there isn't an Apple-specific iPod wall charger in here, but I'm expecting there to exist a transformer that I plug into the standard 110V North American wall socket and that has two or three USB outlets on the back. I know there's a 12V to USB converter for the car, so there has to be a 110V to USB converter for people who have more USB-powered gadgets than USB ports on their computers. But there is nothing in here that I can plug a USB cord into. By far the favourite piece of electronics to abandon here is the Motorola phone charger.

I put everything back neatly in the box and ask where in town I might buy a computer cable. There is one, on one of the back streets, between a gym and a store that sells second hand Harlequin romances and maternity clothes. Here's the sign on the door of the computer place: 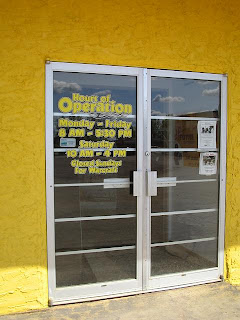 Fortunately it's not Sunday, so I go on in. They don't immediately recognize my description of a 110V-to-USB converter but eventually come back with a device marketed as "Charge your iPod at home!" The existence of the device makes me realize the existence of a demographic who only have Internet access at work, and have iTunes installed on their work computer, then worry about running down the battery over the weekend. It comes with a cable and is $34 dollars. There's a cheaper similar device that has no cord, just the one USB port, so I get that instead.

Sounds like a challenging flight environment. I enjoy solitude more than most, but that might be a little over top for me.

Will you get to install a windsock at that strip? Can you refuse to use it if you feel it's unsafe? What about alternates? I know those are questions that came to mind as I read your post.

Glad you are able to post, I am looking forward to hearing about this experience!!!

My iPhone came with a cord just like the one you have, plus a desktop charger that the phone stands in, plus the 110V wall plug with a single USB out. My iPod Nano came with only the cord. But, the plug that goes into the iPod and the iPhone are the same, so I can mix & match.

Your blog is always a source of surprising and maybe-even-useful-some-dark-and-dirty-night trivia of the highest order! - As in: "... the box of chargers and cords left behind by previous guests ... Every hotel has one of these."

Car rental establishments are a great source if you need the 12v type of phone charger. Same deal "just take it"

The biggest problem with PSUs for the iPod Touch is that many of the cheap "usb outlet" ones don't actually work(*) with the Touch.

The Touch (and I'm betting the iPhone too) needs to "see" the usb in some way before it will go into "charge" mode. The Belkin PSUs seem ok, but some of the cheapo ones on eBay don't.

Paul B
((*) ok, it WILL actually charge, but instead of it taking an hour, it takes over 12 hours, and gives no indication that it is charging)

Not of immediate help but if you're going to be out in the boonies a lot a Minty Boost might be useful on day.

"... it would make a better place to crash than out on the tundra someplace."

LoL! Sounds like 2000' of gravel with weeds and loose rocks. Ouch! Hope you brought spare tires. It makes me feel pretty wimpy when I reject plans to visit 3000' airports with AF/D entries describing the runways as 60' wide, "poor, with alligator cracks in pavement". I've never landed on gravel and don't want to, unless it's a cub or something with tundra tires.

I've never landed on gravel and don't want to, unless it's a cub or something with tundra tires.

Seriously? It's not magic. You ever drive on a gravel road? That's about the extent of the difference: You can't turn as abruptly, and you can't stop as quickly. Having landed c-150's light twins and 4 engined airliners on gravel, I can assure you with a high degree of confidence that you do not need a cub to land on gravel. Tundra tires are only a necessity for really rough, uneven and soft surfaces. Tundra tires on a typical gravel runway add nothing but unnecessary expense, weight, drag, and degraded controlability,

A^2, told you I was a wimp. I love landing on grass, but gravel runways are rare around here ( US midwest ). Anyway, the club insurance specifically excludes gravel runways - probably for chipping the prop damage more than anything else.

I'll have to take your word for it. And no, I don't like driving on gravel either, unless I can stay in the middle ruts and it rained enough recently to keep the dust down.

And you can make such a soft landing on gravel because the crunch of the stones decreases the deceleration on any residual vertical speed you have at touchdown.

As I said, we're sending someone to look at it, and we won't go if we assess the conditions as unsafe. If there is no safe area to run up without gravel in the props, the customer may be charged a premium towards propeller damage.

Deadhorse was featured on the History Channel's show "Ice Road Truckers." It was the end of snowy route from Prudhoe Bay, I certainly hope your flights in there aren't narrated quite so dramatically!

I saw that in the Wikipedia article on the place. I assume the ice roads in question go east and west of there along the coast, as there's a regular road all the way north to Deadhorse.

I only watched the first season episode of ice road truckers, not the whole season, but going on that, they pretty badly misrepresented the situation of the Dalton highway, apparently for dramatic effect. Aviatrix is correct, there is an all weather, year round road from Fairbanks to Deadhorse. There is no "season" on the Dalton highway, as was suggested on "Ice road truckers", It's open summer and winter. (alhough the road may be closed temporarily at times)

Prudhoe Bay is generally used to refer to the area, Deadhorse is the town (for want of a better word) at Prudhoe bay, so one doesn't drive from Prudhoe to Deadhorse. Even if one is referring to Prudhoe Bay the coastal feature, It's still only a short drive from Deadhorse, across permanent roads to the shore of the bay. There are probably more than a hundred miles of all weather roads in the Prudhoe area, connecting the various oil fields up to 45 miles west of Deadhorse. There are some smaller fields east of Prudhoe and west of the Colville River which are not connected with roads, and which have ice roads built in the winter, but those are in the minority.

Apparently, in order to preserve their theme of a dramatic race against time and melting lake ice, Ice Road Truckers took some liberties with the truth.

Ha! Oh, me too. No, more like alligator skin pattern cracking, ranging in severity from unsightly to disintegrating. My airport in question also reported "loose aggregate", so not having a real strong reason to go there I decided to go elsewhere.