The next day, no must be the day after that because the Canadiens are playing again tonight, the weather is better. I ask Dennis about the hangar cat, are there different rules for the two cats: one allowed in the lounge and one not? Yes, he says. Margo makes the rules and she doesn't allow the other cat in the lounge. The cat makes the rules. I didn't see that coming. 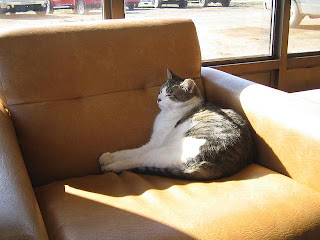 It turns out that Dennis (or maybe it was Margo) was able to rearrange our the airplanes yesterday such that ours spent last night indoors, too. Dennis tows it out this morning and I take all the tents and cords off and put them away before the flight. We top up fuel from the long ground run yesterday and depart.

There are high winds aloft, which make everything fun. There is only turbulence in a couple of spots, but I need to hold a big crab angle to go in a straight line, and plan my turns to finish where I want to be. And guess what, I have to pee. I wonder what fraction of my working life I spend having to pee? Add in the time I spend actually peeing, talking about peeing and being grateful that I don't have to pee and I think it outranks sleep in the list of things I do and wish to do.

At the end of the flight, winds are sixteen gusting twenty-six knots varying between 80 and 100 degrees off the runway. That's okay, I've done lots of crosswind landings with my legs crossed. The only hitch is that my operational 15 degree maximum bank restriction applies throughout the flare and touchdown. I aim a little upwind of the centreline so I have room to drift if needed, but it wasn't required.

Taxi in. Wait for everything to be done in the back. Shut down. Pee. Hand over airplane to the p.m. crew. Back to hotel.

I'm weirdly tired. The two pilots per airplane thing we have going for most jobs now means that I only only do a half day of work anymore, about eight hours from report to shutdown, and I've hardly been going flat out this week. I was going to go straight to bed, but I just found out it's the other pilot's birthday, so I go out and get him a card and a token Tim Horton's doughnut. I was going to put it in a box and leave a note on his door to pick it up at hotel reception, but he texts that he's landed early because of unsuitable weather. We all go out and have dinner together, and I get to give him his doughnut in person. He's a fantastic co-worker, and I'd write more about him in the blog, but I would be creeped out to find my story told on someone else's blog, so I leave his story to him.

I don't think he has a blog. I'm sure the cat doesn't.

I had predicted that the next entry would feature a photo of Margo. I wonder if there's a product opportunity for a cat carpet to cover aircraft windscreens ...

dpierce: She has been getting a lot of press lately. I kind of like cats. They can make you feel appreciated when you're around, and they're nice and soft to touch, but they can take care of themselves. You can associate with a cat without taking on any responsibility. I meet so many cats during my travels that I may implement Caturday around here.

No need to explain. Cats exhibit good situational awareness and risk management habits. They usually enjoy good rates of climb and grease their landings. They also know how to roll inverted on occasion.

Our house has two. I think I have a picture of our Maine Coon swatting a Remove Before Flight pitot cover somewhere.

What made you think any mere human could stop a cat going where it was physically possible for them to go?

Short of a barrier separating them (and I seem to recall you mentioning them ... interacting ... in the hangar earlier) only cat rules would keep a cat out of a space.

When a friend and I visited Greece last spring, one of the best parts about the (tiny and otherwise nondescript) airport in Mykonos was that there were several cats in the outer lobby. One of the cats decided that she liked me very much and took up residence on my lap (until we had to go through security and proceed to our gate. I got the impression that the cats weren't allowed in--there certainly weren't any inside the gate area. Though as a different Rhonda pointed out, how would they really stop them?)

It was one of the nicest waits I've ever had in an airport. More airports should have cats (though of course B would seriously disagree with that comment. Pity about the allergies...).