Made in Sioux Lookout: Part 2

I asked you a few days ago to identify a product made in Sioux Lookout. Thanks to Google, you guys had it solved within minutes of me posting the question: they are airplane skis. They kind of look more like airplane snowboards to me. 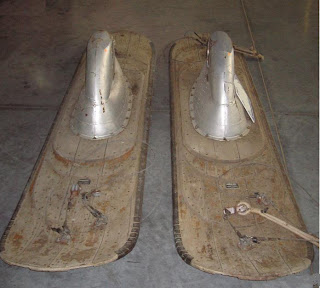 By skis I mean a modification to the landing gear to allow an airplane, specifically a Norseman, to land on snow. A little more about the company and a great summary of the history of Ontario bush flying here. I've never flown a skiplane, but my licence allows me to. for some reason the Transport Canada licensing system requires separate training for wheel landings and float landings, but a pilot trained on either wheels or floats can legally operate on skis. 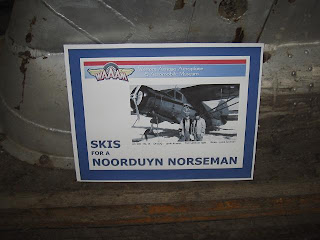 The photos were taken at the Western Antique Aeroplane & Automobile Museum, behind the Hood River airport in Oregon. It's just across the Columbia River from The Dalles, Washington, where they will let you borrow a truck to drive into town.

I've never been on skis either ... maybe one of these winters, but not like these guys. They landed a couple champs on a frozen lake 6NM from the center of the MSP class B. It was legal - barely - they talked to Minneapolis approach, who didn't care as long as they stayed out of the inner ring. The park police had other ideas; I think it ended up being a $1000 lunch stop.

The Hood river area is gorgeous. I spent a few weeks in the Portland area a few years ago, and remember a wonderful drive down the valley.

I didn't make it to the airport, though. These days, there's a guy running a soaring operation there. He's quite a character, I've heard. And he has some great movies of Mt. Hood and the area up on youtube, user waveguru.

Aww that's too bad. Is the park marked on the chart landing prohibited or were they expected to know a local law that wasn't marked on the chart? In Canada if it's not within the built up area of a town or city, it's not marked as restricted or LNDG PROH on the chart, and you have permission to be there, it's an aerodrome. Do they prohibit snow machines there too?

Being a pilot who enjoys the low 'n slow approach to aviation, I'm often wondering about the legalities of using various off-airport areas. I presume the park also controls the use of snow mobiles, ATVs etc...? Otherwise I'd view it as rather discriminatory.

Too bad their lovely outing ended that way. Must have seemed like such a good idea at the time.

Just as I posted my note, I read what Aviatrix posted and see that she's doing the GOOD paperclip thing again - answering my questions. Yay 'trixie! Thanks.

I did a PPC on floats once and the guy who trained me pointed out a particular lake saying, "don't land there. It's the city water reservoir." He hadn't checked the charts and found out the hard way that people get upset when you put airplanes in their drinking water.

The lake could not be more "central city" unless it were called Central Park. The bit they landed on is NW of the airport, the roundish lake bisected by the 6NM inner ring, .. and they're within 3 miles of downtown Minneapolis.

No snow machines allowed either. In the winter, the ice boats use smooth ice.

I don't feel bad for them; they knew what and where they were getting into. Think of the story they can tell.

Thanks for the details, Sarah.

It's a good reminder that ATC will happily clear you to do things that can get you in trouble. They pretty much approve any request that doesn't directly violate an aviation regulation or interfere with other traffic, and they leave it to you to know what you are doing. You could probably fly over the middle of San Francisco Bay and get Bay tower to approve a "low level westbound departure," even though you would get your ass handed to you later for flying under the GG bridge.

It's a good reminder that ATC will happily clear you to do things that can get you in trouble.


THat's a good reminder. THere is a persistent belief that ATC can clear you to disregard regulations. It ain't true. It is still the pilot's responsibility to abide by the applicable regulations and refuse any clearence which involves violating them. Note is made of this in both the US AIM and the US ATC handbook, but many pilots (at least here) are still confused on this point.

I'm a controller at MSP. I didn't work the guys in question, but would have done the same thing the controller did. By they way, it wasn't ATC that called the cops. The lake in question is surrounded by very nice (read rich) neighbors, so it was a "blue hair" thinking Osama had rented a Cub to attack the "American" way of life. My opinion is the cops should have just gave them a warning.

Nice blog Aviatrix! You a regular blog on my must reads.

Isn't that interesting. I would have characterized the "American" way of life as including the freedom to put your motorized recreational vehicles wherever they safely fit. It's not like the riff-raff is going to turn up in airplanes and there goes the neighbourhood.

But if the US law is similar to the Canadian one, then I can't really argue that the pilots got a raw deal. I'm sure there'd be trouble if I put my skiplane on the Rideau Canal, too, even if there wasn't anyone skating there at the time.

(Part of you always say, 'It would be soooo worth it!')

Landing my plane on the reflecting pool in DC probably wouldn't do wonders for my career, either. (Aside from likely getting shot down) It's worth noting that the guys in Minneapolis did not get in trouble with the FAA, but with the park police with jurisdiction over the pond.

Landing my plane on the reflecting pool in DC ...

Aww, it'd be an awesome water runway, if it weren't for that pointy obstacle on the approach.

So is the upshot of this discussion that a pilot must determine all local regulations, park rules, etc. before landing - or suffer the consequences? (Barring an emergency of course). Are city resevoirs - and associated landing restrictions - usually marked on charts?

In Canada a body of water where landing was prohibited is usually marked on the charts. In this case it was inside a city, where Canada required you to land at a certified airport/waterdrome or a military aerodrome anyway.

I'm hoping someone will enlighten us on the general US rules.

The US FAA doesn't specify where seaplanes may operate. It's generally up to the owner or administrator of the water area.

I am not a seaplane (or ski) pilot, but if I were, I'd checkout seaplanes.org - According to them:

A second complication enters in the picture with overriding jurisdictions, most commonly state-imposed seaplane base licensing requirements. In several states, notably Ohio, New Jersey and Indiana, seaplanes may not land unless the proposed landing area is certified as a seaplane base, regardless of whether the waterway owner provides permission or not. To determine whether this is an issue in your area, call your state aeronautics office (often a division of the state department of transportation) ...

In my more permissive state, Minnesota, this PDF document section is a good summary. I note lake Calhoun is not listed as permitted. Using state owned land is generally OK except as described in the 7-county Minneapolis/St.Paul area, and inside State parks. I am intrigued that the Mississippi river is generally permitted even in the metro; there are sections within 50-100' bluffs that would be really fun to use. To say nothing of flying under the bridges... Aviatrix needs to come visit with a Beaver on floats.

I'm pretty sure there's no such thing as The Dalles, Washington...

I could have sworn I landed north of the river. Isn't the river the border there? That's the problem with aviation charts: it's so hard to tell which state you're in.