There are so many varied sites at Angkor Wat that I can understand how someone could spend six months visiting them. I could easily have spent a whole day at any of the sites we have visited so far, and still wanted to come back again to see it in different light. I'd like to visit things in chronological instead of geographic order, maybe. It's always a compromise between seeing everything I want at one site and seeing everything I want in the whole park. And also I have to balance everything with not frying to death in the Cambodian sun. 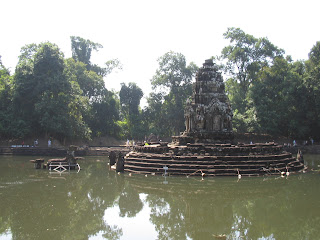 The pond above is at Neak Pean, a complete visual break from temples. It's a series of pools with steps and carvings around the edges, and a tower in the centre of the largest pool. It's apparently representative of a Buddhist legend of a miraculous lake that feeds four rivers through the mouths of a lion, elephant, horse and ox. I don't see it. There are tunnelly things (like the one below) connecting the centre pool with the outer ones, but they don't look like any of the named animals. The guidebook quotes a description from a 13th century tourist who describes gold lions, bronze oxen, bronze elephants, bronze horses and a gold tower, so obviously it has undergone some changes. Bizarre to writing about a place that had tourists eight hundred years ago. 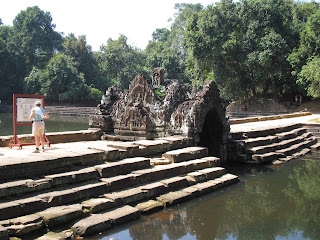 The figure in the water to the left of the centre tower (can you imagine it all covered in gold?) is a flying horse. Pictures taken when the water level is lower, I guess at the end of the dry season, show that the horse is supported by a number of carved figurines. I'm not sure why a flying horse needs to be held up by men, but that's what they say it is. The symbolism used to be different, because it was a Hindu site before it became a Buddhist one. It's very restful to walk around the pools, not too busy here with tourists to stand and contemplate. I went a little way from the pools--but still on well-trodden landmine-free ground--and found this seemingly crude structure. I suppose it might once have been covered in exquisitely carved stone or wooden panels, or maybe it was just a toolshed or an outhouse for the royal pond maintainers. 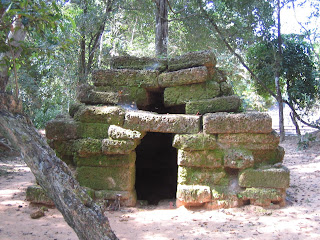 After we leave the tranquility of the ponds and start up the paths towards the road where our tuk tuk waits, we're besieged again by vendors. The rules must prohibit them from harassing the tourists actually within the ruins, but you have to run the gauntlet to get back to the road. They are not individually especially intrusive, and the first time you encounter a particular tactic it's almost endearing, but it wears on you after a while. "Lady! Lady! Posecard! Only one dollah!" says a child, producing a package of postcards. She'll open the cardboard folder and demonstrate, counting "One two three four five six seven eight nine ten," as she flips through the postcards inside. She can probably do it in French, German and Japanese, too, matching the language to the tourist. There is a natural inclination to pay attention to and encourage a child demonstrating skills, and they press this to full advantage. It takes more than I have to not respond to friendly children saying "Hello!" They then ask "Where are you from?" and when told Canada, quickly respond, "Canada! Capital Ottawa!" This is good for a double take which is all the kids need to besiege you with merchandise. I was impressed, too, when they recognized us and called us by our names on the way back out of the temple. I can't remember the names of most of the people I met. 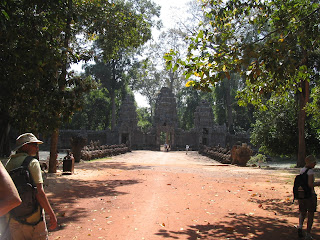 We go into Preah Kahn, a temple of long corridors, series of doorways, and elaborate lintels above the doors. Some of the temples we access by walking down jungle trails, so it's more like a series of isolated sites than a mighty city. This one has part of an entrance way still intact, reminding us that once upon a time the whole area was probably as dense with humanity and structures as Phnom Penh is today. Below is a detail of the railing on the entrance, a number of strong men holding a snake. This motif is ubiquitous in the Ankhor Wat area, and you see it in new construction as well. The heads of the men and of the snake are mostly ruined, I'm not sure whether it's through vandalism or just that they are the most delicate and subject to natural forces first. 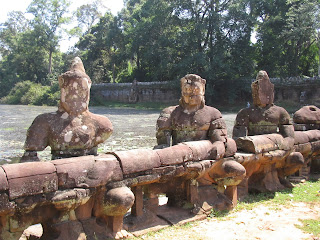 Everywhere the walls are falling down. Here they are propped up with wood, but you can see all the fallen stones, too. One feels privileged to be here to see this ancient workmanship. It's somehow both timeless and ephemeral. I know it won't last forever, but it's already lasted so long. Look at all the stone window frames. Imagine craftsmen squatting out in the shade of a tree, cutting those straight lines to fit one against the other. Did they imagine that they would hold together for a thousand years? 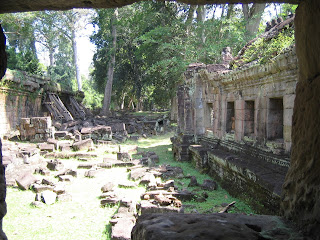 We follow a line of doorways straight towards the centre of the temple. These doorways have been standing this long as well, and in some places there is even a roof over our heads. We have to remember the safety standards on the boat when considering whether to enter these archways, but there's a lesson to be learned here about how important setting up company standards and demonstrated expectations are for safety. I refused to enter a derelict high school, about twenty years abandoned in a northern Canadian ghost town, but here in Cambodia I'm walking under stone lintels that have been unmaintained for over five hundred years, because thousands of tourists do. I'm sure just walking through here is more dangerous than eating fish and vegetables from the market, and fewer tourists do that. Humans, famously, suck at risk assessment. And look, shiny! 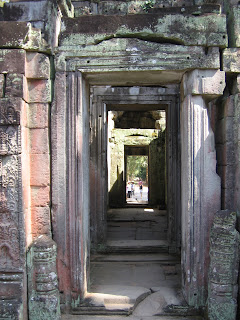 At the heart of the complex is the remains of a Buddha statue. There are some people sitting nearby selling incense, and the remains of the statue are still treated as precious. While we are looking, a young Khmer boy comes up to us and in clear, grammatical, English starts to tell us about the doorways, carvings and other aspects of the temple we are looking at. In between professional-sounding phrases about the construction and history of the temple, he asks us where we are from, and tells us laughingly that he is from the moon. We're looking around suspiciously for the hidden camera, or the accomplice who is going to hit us over the head, but he's the real thing. He may be making some of it up, but it's an interesting and thorough tour of this area of the temple. The doors from one direction approaching the Buddha get lower and lower as you approach. These doors ensure that the worshippers bow over and over again, lower and lower as they approach the central Buddha. In another direction, the doors remain high, as they are for the king who is not obliged to bow to the statue. The boy says that the numerous holes in the stones were to hold precious stones and other decorations. He shows us the tree that looks like an elephant's trunk, the queen's chamber and then leads us back to where he picked us up. He says he wants to be a tour guide when he grows up. I ask him how old he has to be to get a licence to be a guide at Ankor Wat and I think it was sixteen or eighteen. We assure him that he can be a tour guide no problem, but that if he wants to, he could become an astronaut and go to the moon. He at no point asks for money or makes the slightest hint that he is doing this for any reason but for his own entertainment, but we all tip him for a tour as good as anything we've received, and for the novelty value. At least one of his parents are probably tour guides, but he may make more than they do in a day. 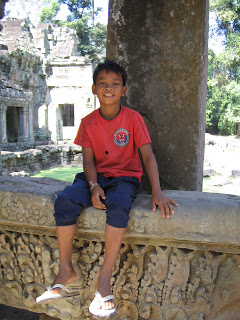 Here's a view of one of the door lintels Preah Kahn is known for. We walked all the way through one way, then realized we were in the wrong place and took a different turn to go out through the correct series of doorways to find our rendezvous point and get back in the tuktuk. 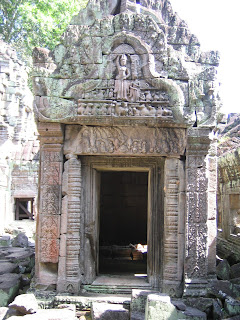