Angkor Wat is what people call all the temples together, everything that remains of this ancient city, and the name also applies specifically to the largest temple. It's the iconic image of Cambodia, featured on the flag, the beer, the t-shirts, pretty much anything that needs to say Cambodia. We first saw it while passing by to get to other temples, and stopped by it to see inside, the first afternoon. It's hard to appreciate how big it is, because it's so big you just think each part is further away than it is. 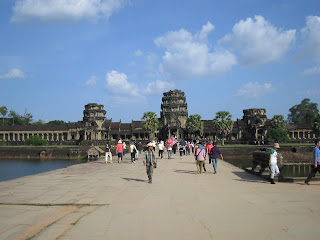 It's accessed via a broad stone walkway over a waterway, I guess you might call it a moat. There were people in boats on the moat. I don't know if they were collecting trash, doing maintenance, hunting for frogs, or just having fun in boats. There was so much going on that I didn't think about it until now, trying to describe the experience. Once upon a time there would have been stone railings all along this walkway, but they have almost all fallen away. The walkway itself must have been a thousand years old, but it was more solid than most of the roads at home. The first set of towers, the ones you see in the photo above, are just part of an outer ring. You go up the stairs, pass though it, and follow another long stone walkway to the main building. There are more remnants of the snake-style handrail along each side and some "small" (bigger than my house) buildings in the fields either side of the walkway. They, and other buildings like this within courtyards are called "libraries," just a name some archeologist gave them, and that they were never repositories of documents. 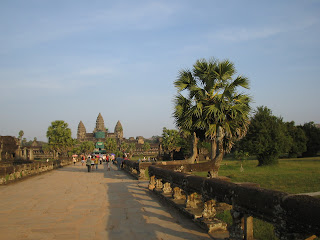 At the end of the long walkway is Angkor Wat itself, but it's again a series of rings, kind of like cloisters at a monastery. There are roofs overhead in some places, but I note that they are very crude. Perhaps the rough stone was originally covered by carved wooden ceilings like in European cathedrals, or by silk draperies. The stone ledge around the top would easily support a ceiling. Interestingly, much of what they know today about Angkorian era woodwork comes from the apsara doors. The stonework there mimics woodworking joins so closely that it shows how they made doors. A lot of the stonework is not entirely finished. You see walls that have been partly decorated and even a few that have obviously amateur copies of the apsaras and designs, something between ancient graffiti and apprentices trying their hand at master work. 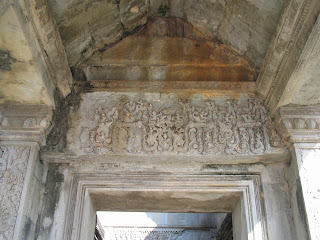 This many-armed Buddha statue was probably not representative of the original deity worshipped here, as the Angkorian kings were mostly Hindu. There seems to be a fair amount of give and take between Hinduism and Buddhism, for instance isn't it the Hindu gods, not Buddha, who are usually depicted with many arms? I thought this odd at first, and then I realized it's closer to the norm than to the exception. It's true for other combinations of religions that have existed in the same area for a long time. Christianity is so irrevocably intertwined with paganism that ancient fertility symbols like trees and rabbits are still central to Christian holidays. Judaism and Christianity have half a holy book in common. Religions branch off others and absorb pieces of others they come into contact with, like other aspects of culture. 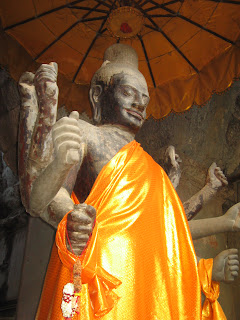 The orange drapery on the statue is similar to a monk's robes; it's a distinctive colour that makes monks extremely photogenenic, especially against the stone, grass and sky. We see lots of monks at Angkor Wat, I think more because it's a fascinating place to visit as to worship at any particular statue. They are definitely tourists just the way we are, posing for photographs, looking at the old buildings and exchanging tips on what sights to see.

A monk is not allowed to touch a woman, not even an accidental brush between clothing. We found out that the monks weren't allowed to go to the water festival because the crowds were so dense it would be impossible not to come into contact with females. If they do accidentally touch a woman there is a purification ritual they have to go through, so I'm mindful of this and give the monks room. I am also not allowed to initiate a conversation with a monk, and presumably this includes gestural conversations, like miming, "May I take your picture?" Nevertheless, I want to take pictures of the monks so I keep watching where they are going in the hopes of setting up a good photo. I saw a group of three walking down a cloister, but the light was poor. When I got to the end of the corridor, I realized that they had gone out onto the promontory at the end of the gallery, where the sun hit them. The background was a little plain, but I might be able to get a shot from an angle, partly framed by the temple. As I'm trying to unobtrusively maneuver for this shot, the oldest of the three greets me with his palms together and the words sak sabai. It's a "how do you do" type greeting, and the response is also sak sabai. In retrospect the response is probably something different when you're talking to a monk, because the language has masses of parallel vocabulary used just for monks (and another set for royalty). How dependent on social registers is a language when I tried to work with it for two weeks and couldn't even manage to learn the pronouns? But it's incredibly obvious that I'm a foreigner, so he can't expect proper vocabulary. Actually he looks slightly surprised that I answered at all. Maybe some tourists shriek and run away. I follow up with my best Khmer for "I am from Canada," and then it's my turn to be surprised.

He responds with, "So am I. I'm from Ottawa," in perfect English.

He has a Khmer accent, and looks Khmer. When I'm done looking confused, I put it together that he emigrated to Canada and now has come back here to study as a monk. He confirms that, and we chat for a bit. I ask if I can take their picture and he says sure, don't you want to be IN the picture? He hands off my camera to the youngest monk and I come out in the sunlight to sit with them. Sorry, you only get half that picture, and the toe of my shoe as I sit crosslegged with them. 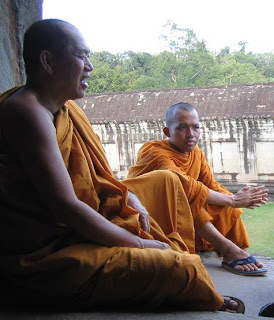 At the centre of all the rings of galleries are steep, steep, crumbling stairs up to the iconic rounded towers. One of the staircases is augmented with scaffolding supporting wooden stairs and a handrail, still steep but usable. Reaching the head of the line, visitors are assessed for the propriety of their clothing before being issued a pass to go to the top. 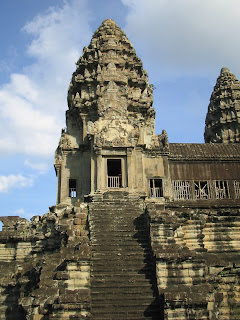 There's not a whole lot different at the top of the towers. It's most interesting as an opportunity to see the towers as closely as possible, and for the view of the whole complex, as you walk around and look out the different sides. You just see jungle beyond the walls now, but I suppose once wooden and palm frond houses would have surrounded it. There's no real central area or anything, just fancy decorations and vistas. It's not really intended for people to marvel at, but for the gods to be comfortable and happy. The idea is to build a fabulous residence for the gods so they will spend time near you and be avaialble to hear your prayers and well-disposed towards answering them. 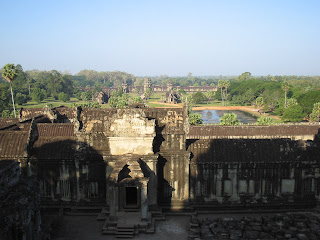 Looking back toward the west you can see the outer ring, the walkway and the libraries, plus the courtyard below. The rubble was arranged in rows and catalogued with numbers. The handwriting style and the age of the markings makes me suspect that it was a French project. 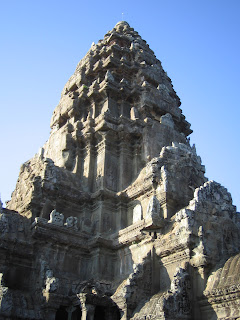 This was as close as one could get to the towers at the top of the structure. I think it's interesting that the rounded shape is actually composed of straight lines and square corners. It gives a very interesting effect. I wonder who first came up with the idea and how. 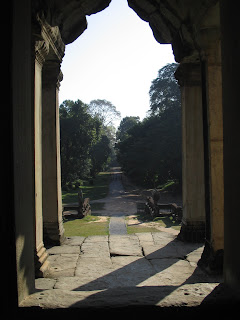 This was the central exit archway from the complex to the east. When you walk right to the edge of the ledge it's just a drop off, no stairs, no ramp, no crumbled ruins, just a three metre drop to the ground. I found out later that it's the exit where you walk out to mount your elephant. Of course. I wonder where the valet elephant parking was, back in the day. 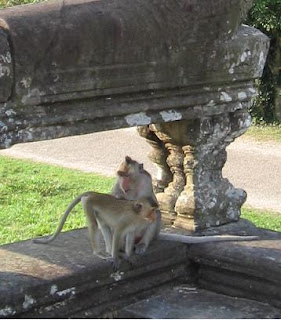 We didn't see any elephants at that temple, but there was a dog, in good condition, and a lot of monkeys sitting around nursing their babies and grooming one another.

At the end of the day we go to dinner at a huge tourist buffet restaurant and I get a chance to find out what some of the things I have been eating are called. They don't have any ngeuv though. There's also Chinese food and "spagbol". (Oh that's what I want to eat when I'm travelling, a Cambodian imitation of an Italian dish as interpreted by the British). The food is pretty good. Cambodian desserts aren't as sweet as we're used to, just slightly sweetened, but palatable. I take a sample of everything, including something that looks like green jello (hello Salt Lake City!) but turns out to be similar to Turkish delight, and my favourite of the whole selection.

The highlight of the evening is the traditional dancing. There are apsara dancers, contorting their hands and feet the way the temple carvings do, and folk dancing in other costumes, all telling traditional stories. I realize looking at the Khmer writing on the wall behind the dancers that the squiggles are becoming a little bit recognizable now. The words that means "Amazon" (shown in my apsara post yesterday) start the same way as the word for "Amok," one of my favourite dishes, that I see on bilingual menus, and the word "America" which I copied onto postcards going to the US, just for fun. I'm pretty sure the post office can handle French and English.

I remember in my childhood reading several very interesting articles in National Geographic about Ankor Waht, the excavations and the restoration efforts. Thank you for your very insightfull personal impressions of your trip.