Cambodian history is a little confusing because there are so many players and they keep changing sides and positions. The names Cambodia and Kampuchea are simply different translations of the same Khmer word. Khmer is the name of the language and also of the majority ethnic group throughout the area's history. It's taken a while for me to work out who was in power when and whom the Americans were supporting or bombing at any given time. If you read this five page article you'll know about as much as I understand of modern Cambodian history, and I summarize it here, along with some ancient history that I have from the museum.

The first Khmer kingdom was the Funan from the first to the sixth century AD. It was absorbed into the Chenla state which ruled from the 7th to 8th century, and then in the 9th century, King Jayavarman II established himself as god-king, ruling from the northern capital of Angkor over a Khmer Empire that eventually encompassed lands within modern Cambodia, Laos, Thailand and Vietnam. In 1432, Angkor was sacked and the capital was moved to the south. The Empire continued to wane over the next few hundred years, losing territory to Vietnam and Thailand.

In the 19th century, King Ang Duong fended off the invaders by negotiating with France to make Cambodia a French protectorate. The French did little development work, just built roads and railroads that allowed resource extraction, and maintained the monarchy as puppet kings. Cambodia achieved independence from France in 1953. In order to make the transition to a democracy, King Norodom Sihanouk abdicated as King and successfully ran for president in 1955.

During the Vietnam War in the 1960s, Vietnamese communists used Cambodia as a safe base. King Sihanouk tried to steer a course that would not upset either the Americans or the Vietcong, because he felt the Vietcong would eventually win the struggle and knew he'd have to live with them after the Americans left. Cambodian communists, known as the Khmer Rouge, were relatively weak at that time.

In 1970 the Sihanouk government was overthown in a coup led principally by Sihanouk's pro-American General Lon Nol. The new government was immediately recognized by the United States. Sihanouk joined the Khmer Rouge to try and get his country back.

The Americans had already been bombing Cambodia to get at the Vietcong, but now with a sympathetic leader in Phnom Penh, they were free to fight more extensively on Cambodian soil, effectively fighting Cambodia's civil war on behalf of Lon Nol's government. Casualties, of course, included non-combatant Cambodians, who blamed both the Americans and Lon Nol, and wanted their king back.

After years of fighting, the Khmer Rouge took power in 1975. The man who would call himself Pol Pot was the real leader, not King Sihanouk. He evacuated towns, executed all perceived opposition, and indirectly killed almost two million people through mismanagement, slave labour and famine. Pol Pot blamed the Vietnamese and went to war against them, plus accused pretty much everyone of undermining the glorious revolution, resulting in more executions. Tomorrow's post will give many more details on the Pol Pot regime, and the purpose of this post is to put that episode in its historical context.

Amongst those who fled to Vietnam to avoid being executed for imagined treason were Heng Samrin and Hun Sen, whom the Vietnamese installed as the Cambodian leader and Foreign Minister when they felled the Khmer Rouge government in 1979.

The end of the Khmer Rouge and the resulting flood of refugees into Thailand allowed the rest of the world to see the shocking conditions in the country, but it was so disorganized it was difficult to deliver aid. The Khmer Rouge continued guerrilla attacks, and meanwhile former King Sihanouk left the Khmer Rouge and founded his own resistance movement while Son Sann, Lon Nol's former PM, formed a third resistance movement. The only way they could get support from the US was for the three resistance groups to join together, with King Sihanouk named as the leader. This left the US and the UN supporting what was effectively still the Khmer Rouge, the Communists, against the Vietnamese. The Vietnamese finally withdrew and UN peacekeeping forces tried to restore order. 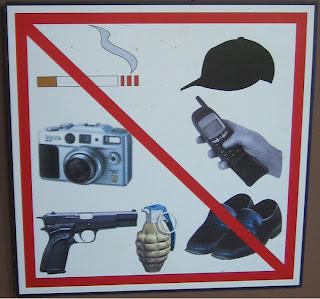 The prohibitions on this sign were fairly common. We hoped that fewer people were walking around with hand grenades than hats.

Elections were held in 1992, bringing Sihanouk's son Norodom Ranariddh to power as in a constitutional monarchy that returned his father to the throne. The election was contested such that Ranariddh was forced to share power with Hun Sen as co-prime minister. The Khmer Rouge, still led by Pol Pot continued to disrupt the country until Pol Pot's arrest in 1997. After some friction within the government coalition, partly resolved through intervention by the King, Han Sen is today the Prime Minister and Ranariddh Head of the National Assembly.

What a resume for Sihanouk. From puppet king under a French protectorate, to King, to Prime Minister, to Communist guerrilla leader, token king again, founder of a different revolutionary movement, leader of a revolutionary coalition, and in the end back to King in a modern democracy. He is listed as the 1st, 12th, 16th, 20th, 23rd, 25th, 26th, 27th, 35th and 36th Prime Minister of Cambodia. And the guy is still alive! I think after all that you deserve to know that his full name with titles is Preah Karuna Preah Bat Sâmdech Preah Norodom Sihanouk Preahmâhaviraksat.

And here's a picture of four people and a live chicken on a motorbike. 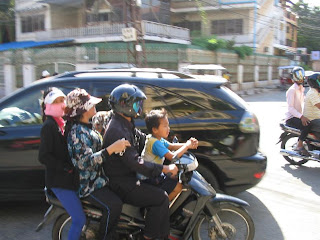 We saw a bike with more live chickens on board, but weren't quick enough with the camera.

It seems that whenever I see images from countries that have a lot of motorcycles/mopeds and there are multiple people on board, the driver is the most likely person to be wearing a helmet. The driver also usually seems to be the patriarch. If I were riding a motorcycle with other members of my family on board and an insufficient number of helmets, I would make sure the others were protected before myself. Can we chalk this up to cultural differences, or are there laws in these cities/states/countries stipulating that the driver of a motorcycle wear a helmet but not the passengers?

Two years ago (some members of the group were returning), no one wore a helmet. We were presuming that the sudden proliferation of helmets was due to creation or enforcement of a helmet law for the drivers. We never thought to ask.

Note that some of these motos are in effect taxis, so that the driver is the owner and everyone else has just negotiated for a ride for a kilometre or so. You can't walk a block in Phnom Penh without having someone try to sell you a moto ride.

Yes it is actually a recent law in Cambodia (I can't speak for other places) that the driver of a motorcycle must wear a helmet.