I Can See Russia

Local accommodations consist of a hunting lodge on the edge of the same little lake we flew over on final. The ground floor is a large kitchen/common room area with better-than-expected wireless internet and the aforementioned terrible telephone line. It has electricity and lights and satellite television, and everyone's computers set up on the tables. There are bear pelts and trophy antlers on the walls.

Up a narrow flight of stairs are three rooms full of bunkbeds, and more bunkbeds on the landing at the top of the stairs. As the only female on this expedition, I have a bunkbed room to myself, either four or six beds altogether, and the four guys are sharing the other two rooms. The rooms are very small. There's only just space for me to put my luggage on the floor and stand next to it in order to close the door in my room. There's another bear pelt on the balustrade. The curtains, despite our latitude, are not in any way lightproof.

I go to bed in daylight and wake up early the next morning for my flight. The weather is flawless blue sky from horizon to horizon and very light winds. We drive to the airport and then I realize I can't get to my airplane. The vehicles that picked us up drove out through automatic gates, but they aren't so automatic from the outside. I encourage the driver to interpret clean spots on the keys, and to try the obvious numbers, but the gate does not swing aside.

We drive up to the tower, which is looking pretty fortress-like, but I get out of the truck and walk around from door to door until I find a door with a security camera and an intercom. I get out my pilot licence and then push the button and reach an air traffic controller who may recognize my voice from the day before or maybe just sympathizes with my plight. She tells me the gate code and it works.

The airplane is where I left it and undisturbed. We take off and fly for I think it was thirty to forty-five minutes. We overfly a few tiny communities with little dirt airstrips, but no visible summer roads connecting them. Some communities don't seem to have airstrips: they probably are served by seaplanes. Mostly what we see is endless little round lakes and swamp. The mission specialist says, "Someone had to draw all these little lakes on the map. I bet they thought no one would check and cheated on some." I don't check to see if they cheated.

I keep my eyes out for musk oxen (this was before I knew that musk oxen were hunted to extinction in Alaska, and I don't think this is the area where the first failed domestic herd was turned loose), or for anything in the landscape that isn't a small round lake. No trees. I hope they have rocks. The people who lived here before GPS and compasses would need to them to build inukshuks so they would have something to guide their travels. 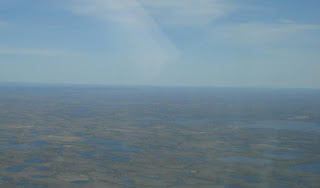 The landscape changes when I reach the coast. Now it's little round lakes and a wide meandering river on the land side, and the Bering Sea with a few little islands on the sea side. The Bering Sea. I fly out over the water, over the actual Bering Sea. Some people collect states or counties or airports they have visited. I collect bodies of water. I've flown above the Atlantic and Pacific Oceans, the Hudson Bay, all five Great Lakes, plus Athabaska, Winnipeg, the Great Salt and the the Great Slave Lakes. This is a most excellent addition to my catalogue.

I look for beluga whales. I want to see musk oxen or caribou, but I really want to see a beluga whale. They are my favourite whales, but who ever gets to see one outside an aquarium? I don't see any, but I keep working. I look out over the water towards the western horizon. The next land that way is Russia. I strain to see it, but I have about as much luck as with the belugas. I hit the zoom out button on the GPS a few times. There it is! Now I can see Russia. It's right there on my GPS screen. 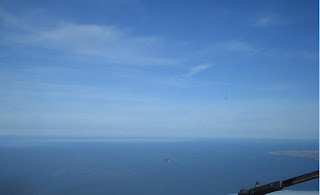 While we are flying, there is quite a bit of air traffic into the nearby coastal airport. I'm outside their zone and not on a flight path to anywhere I expect someone would be going, but I monitor their frequency just in case. One pilot inbound in a Citation makes the regular calls to traffic, then adds, "Anyone in the village want to make a few bucks? Someone needs a ride from the airport." I suppose people in town monitor the airport traffic frequency at home. It is after all what is going on in town.

We fly back across the thousands of tiny lakes to the airport, land and taxi in. The tower calls the fueller for us, and although we were warned to expect very poor fuel service, the fueller arrives fairly quickly and is polite, sober and enthusiastic. I notice he has the same family name as the local chief, the namesake of the main road and he confirms it's his family but does not elaborate.

The afternoon crew isn't here before we're done, and there's no way to call them, so I leave the airplane unlocked with the keys on the floor and we just drive back. We find them at a stopsign, coming out as we go back, we wave and tell them where the keys are and they go to work while we go back to rest. We stop for groceries, and the grocery store is pretty normal with a decent range of items, except that they don't appear to believe in vegetables. Pop is on special for a forgettably expected price anywhere. I've always found that when you go to small places there are rumours of pop going for $5 a can, but I've never encountered that place. I hope to have a better chance to explore the town tomorrow.

There are usually a bunch of Musk Oxen if you fly out to the large island WSW of the airport you are currently based at, as well as on the piece of land just east of that island (it is also technically an island and is denoted as such on the chart, but it is only separated from the mainland by a small river and a large inlet.

Sorry for being abstract, but I am trying not to give your location away if you don't want it to be public.

I have been flying out of a town up near the "large meandering river" and the coast for a couple of years now. There are usually a bunch of moose in the area.

If you happen to sight some wildlife you want to see, there is no restriction like there is in Canada about minimum flights above the wildlife (although courtesy may dictate otherwise)

Jackal24 has proved it. No matter where aviatrix goes she has friends. Looking at clustrmaps,she is read everywhere but Antarctica and if it was on the map, she would probably has readers there.

The price of pop would be a whole lot different if the air freight was not heavily subsidized . I once flew a load which was, quite literally, 30,000 lb of nothing but pop. Depending on the distributor and how they stack it, it comes in 2,000 and 2500 Lb. pallets.

jackal24: thanks for both the information and the discretion.

hawk205: isn't it awesome? If there is someone from Antarctica reading I'd love them to get in touch because I know someone who would like to send you a postcard. She's not asking for anything, just wants to know enough about you to pick out a good postcard for you.

You didn't even have to bulk the load out with potato chips, A Squared?

Some communities don't seem to have airstrips: they probably are served by seaplanes.

Having a hard time thinking of many recognized communities with year-round populations out that way without an airstrip. Maybe they're out there, but none are coming to mind (other than a very few close to and linked by road to another community with an airport. Seaplanes used to be a regular form of transportation to and from the villages out there. Once the money started flowing from the Pipeline though, most villages got an airstrip. I would expect that the floatplanes out there do the vast majority of their flying on charters for fishing, hunting, biologists, surveyors, and others with non-village destinations.

You didn't even have to bulk the load out with potato chips, A Squared?

No, it was great, unload a dozen or so pallets and you're off and running.

When it comes to flying potato chips, I am usually advised to poke a little hole in the bag. Not big enough that the chips will go stale, but big enough that air will escape, preventing the bags from popping while climbing to altitude.

In some areas, I have checked those lakes, and they are accurate as far as I can tell.

for those who are really interested, soda weighs roughly 10 lbs per dozen cans.

Sounds like next time you go, you can make some extra $$ for Cambodia by carrying in some pop.....