My flight isn't until almost noon, so I get up in the morning and go for a run. It's a nice temperature early in the morning. There aren't a lot of sidewalks here, so I run in the street. Fortunately there aren't a lot of cars, either. I don't immediately notice any altitude effect of running. I'm running at a comfortable warm up pace and my breathing is comfortable, but then I start running faster. At first it too seems normal. There's no "oh I can't breathe, the air is too thin," feeling. I just get tired faster. I have a GPS stopwatch (a Garmin Forerunner 305) to tell me how far and fast I'm going, and what should have been an eight minute segment of my workout took eleven minutes. And it was dead flat. I wish I'd run every day I was here. It probably would have been great to improve my cardio.

The person who has been designated to take me to the airport asks when I'll be ready to go. I don't have to go super early, seeing as it's such a small airport, and I'd like a chance to walk into town and and see the museum that was closing yesterday as we got there. I calculate on enough time to go and see it and come back, but he seems disappointed. "Couldn't you be ready earlier?" I tell him my museum plans, and it turns out that he wanted to go earlier so he could see the museum, and other things. So we load up my stuff and go together, and I don't have to walk. Isn't communication grand? 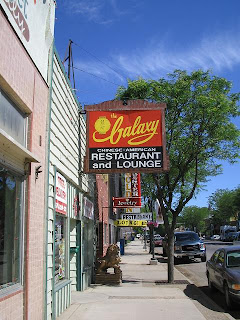 The main street of town is deliberately retro. I guess they turned around and realized that it was out of date and froze it that way before anyone could get one of those newfangled electric signs. The museum is there in an old armory--or for all I know there's a current armory in there somewhere too. I have a notebook with sketches and detailed notes on the museum but I filled it up and started a new notebook and forgot to keep the old one in my flight bag, so it's at home and I have to rely on memory. The main floor was mostly ordinary pioneer artifacts, of the sort that older people remember their grandmothers having one: odd kitchen appliances and farm implements and local ephemera like an invitation to the debutante ball and the dress someone wore there. They had some nicely restored horse-drawn vehicles and the town's second fire truck. When it arrived the town's first fire truck had been repurposed as something else, perhaps a municipal water hauling vehicle and then partly remanufactured into another thing. The story was probably more interesting than the first fire truck itself would have been on display. Upstairs was a gunfighter and cowboy display. I wished I knew more about guns and gun history to better appreciate the collection they had. With a better base I would have learned and retained more. I don't think they missed much in the way of types of action and ammunition used in the American West.

They catered to what people wanted to see and reality both. For example they had a set of pearl- handled revolvers and then pointed out that they were manufactured years apart and didn't have the provenance: people didn't carry two matched guns the same. If they were going to carry two guns they'd have two different sorts. They had a lot of guns and saddlery that had actually belonged to and been used by famous gunslingers and some fairly informative text about them. They told the chain of custody stories from the manufacturer through to the museum donor of many of the items, and did so in a way that made the items more interesting.

My second favourite piece was an elaboorately tooled saddle that was custom made for the donor's grandfather. The donor remembered going to the shop with his grandfather and that the saddlemaker had measured him not with a tape, but with string which he knotted to mark the measurements. The saddlemaker was blind, and apparently leatherwork was a standard trade for the blind in those days. The skirt of the saddle was all worked with little leaves and flowers and symetrical designs. I guess you can feel all that with your fingertips, and keep track of it in your mind.

My favourite piece was a painting called, I think, "The Old West Meets the New." It depicted a cowboy, on a horse, driving a few calves as an airplane flies overhead, and the cowboy is reaching up so that his fingers seem to almost touch the image of the airplane. Photography wasn't allowed in the museum, so I sat and sketched the painting, but that's in the notebook I don't have with me. I couldn't reproduce it again now.

In the giftshop, there was a basket labelled "penny postcards." Postcards usually cost 25 cents to a dollar, so I queried what a penny postcard was. They were a penny each. They had found them somewhere in their basement and they just wanted to get rid of them. They are the most boring postcards ever. I bought about a dollar's worth. I love postcards. Yes, Michael5000 , you will in time get a sample of each.

We browsed a few antique stores on the street and concluded that if you had a truck there were some good deals to be had, but there wasn't anything that would fit in my suitcase to go on four different airplanes.

I was dropped off at the airport with plenty of time. It was a little complicated with my multiple airlines and connecting to Canada, but I managed, and I got home, with my luggage. This little stegasaurus was on the floor of one of the airports. You know how I love both dinosaurs and decoration on airport floors. 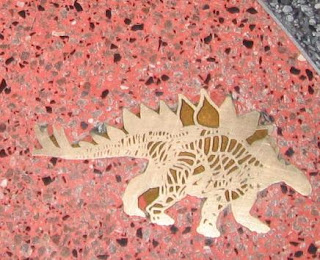 A shout-out AND prezzies! This is the best CC post ever!

In-law duty occasionally takes me to Gunnison (elevation 9000'). I can run about a short mile there before starting to feel really, really... weird, after which run two blocks, walk one block seems the safe-and-sane approach. But my guess is you're in hella better shape than I am.

Saddle making is still an occupation for blind people (or at least the visually impaired) - I knew a guy in London who had very little vision and he was a trained saddlemaker (there's another word for it but I forget what it is). He did it mostly by feel but would also rub chalk over the stitches to increase the contrast so he could see what he was doing. When I wondered what he was doing as a saddlemaker in London he pointed out that there were more horses there (with the police and army) than in Somerset where he came from.

Re London UK - I was doing a walkabout downtown, around Hyde Park (my flight landed at 6:30am, my hotel was happy to store my bag but the room would not be ready for another 6 hours).

There are riding clubs in downtown London. There are horse paths around the periphery of Hyde Park. At intersections there are two sets of crosswalk buttons - some at the usual 4-foot (or so) height for us pedestrian folk, and another parallel set at about 7-8 feet for those on horseback.

And, in compliance with the recently emphasized link posting rules: CLICK HERE

There are doubled crosswalk buttons, with high ones for equestrians, on some of the trails here in Portland. I was baffled for months, until I saw somebody on horseback actually use one.

As a young man then in Kenya - some 50 years ago - I once climbed Mount Kilimanjaro (19,340 ft). We did some acclimatisation beforehand but it was still a pretty exhausting haul over three days to reach the base of the steep summit scree cone . This final 4000 ft (ish ?) to the summit was done in the small hours when the loose surface was frozen - sunrise and the standing pole glissade down afterwards was great reward for the intense effort of getting up . The surprising thing (to me) was that we were able to summit and then descend to our 3 days ago start point all in the one day as we were increasingly energised the lower we got . Good times .

On my list of places to visit is Dinosaur National Monument. I may try to swing through there the next time I visit a friend in Durango. She trains at the 6600' and runs marathons are lower elevations. She qualified for Boston in Baltimore. She had to allow for legs that couldn't handle the pace her heart and lungs could support.