There are thunderstorms building north of the airport, which is where we want to be, so I go into the PIK booth to check the 19Z weather that came out during the drive to the airport. There's another pilot seated at the terminal. 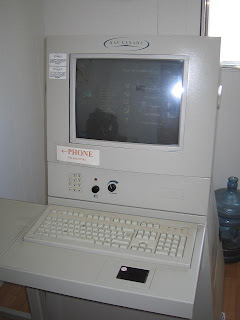 "Why don't you drive," he suggests. He's unfamiliar with the Nav Canada terminal. Truth be told, while I know the website it reaches intimately, I'm not too fluent in Pilot Information Kiosk use either. The interface uses a touchpad mouse, just like my own laptop, but instead of tapping anywhere on the touchpad to select, there's a specific ENTER circle you have to tap inside. So move the cursor by sliding your finger around on the touchpad, then pick up the finger to tap on the circle. I haven't figured out how to use scroll bars with this interface. Maybe click with my thumb on the enter circle while sliding with my finger on the rest of the touchpad. I just used the arrow keys on the keyboard for scrolling.

I started with the GFA, which goes right up to Whitehorse, showing a big low there, and forecast as low as 1500' agl with generally 6000-8000' agl bases on TCU topped at 22,000'. Not a lot of change in that forecast on the subsequent GFA charts. On the the TAF/METAR page. There are thunderstorms forecast right at this airport, starting in a few hours. The traveller (or I suppose he's a "traveler") decides to wait another day before continuing north. I don't check upper winds and NOTAM because I already looked them up at the hotel. We won't be crossing mountains so I tell my customer that it is safe to go, as long as we plan to return early, so that if there is a storm cell right over the airport, I'm not trying to wait it out with minimum fuel. Also we'll talk to our respective colleagues when they land.

The airplane taxies up, completes the post-mission work with the engines running and then they shut down and the door opens. I can call a no-go decision for safety, but a no go for operational reasons is up to the customer. I repeat that I consider it safe, even though I suspect he's hunting for a pilot-driven excuse not to work today. He cancels the flight.

The other pilot sweet talks the guys into sharing one truck back to the hotel and lending us one of theirs so we can go sightseeing. There's a trapper's store seven miles (I use miles because addresses up here are based on the old mileposts from when the Americans built the Alaska Highway) south. As soon as you walk in you smell smoke-cured leather. There are full pelts for sale from all the local species, crafts made out of silly things like shellacked moose-droppings, silverwork, outdoor supplies, old-fashioned leg-hold traps (as rustic decorations: hunters use more humane traps now), and some just for display items like a pair of beaded leather mukluks. There were some amazing elbow-length gauntlets with thick leather palms and various sort of fur on the back. I was in awe of them mainly because I know it gets cold enough to need them, and that the craftspeople who made most of these things are descended from people who lived up here before there were any warm hotels to go back to. I end up buying a pair of moose leather moccasins beaded with a bear claw pattern and trimmed in beaver fur. They cost about the same as a pair of boots or of fancy party shoes, but they are a lot prettier than the former and a lot sturdier and warmer than the latter. How will anyone know I go to exotic places if I don't bring home some souvenirs?

How will anyone know I go to exotic places if I don't bring home some souvenirs?

You must be using a different definition of the word "exotic" than the one I'm accustomed to.

exotic alien, being or from or characteristic of another place or part of the world.

The heat index is 119 degrees today.

Wrapping up in fur to go outside is a pretty alien thought right now. Some brave souls are slathering on sunscreen and hitting the pool. We are closing all the blinds and huddling under the air conditioning.

If you are selling Alaska as exotic, I'm buying on behalf of all the rest of us who have never seen snow.