Canadians don't normally have to register in advance to vote. This year there are new rules requiring everyone to have ID at the polls, even if they've been voting in that riding for years. This seems pretty straightforward, but there are places in the north where people have nothing in the way of ID, pay cash rent to landlords who pay the utilities, but everyone in town not only knows who they are, but who their mother is, their entire family, and every single person they have dated, place they have been, and stupid thing they have done their entire life. It's not like you're going to walk into one of those communities and pretend you live there and people won't notice. There are also homeless people who chronically don't have ID. And the homeless do vote and want to vote. The people who don't have any ID are likely not people who would be voting for the current government. I'm not quite cynical enough to believe it is intentionally a disenfranchisement scheme. I do certainly hope no one is denied their right to vote over such a thing.

Myself, I will be away from home on election day, so I have to register to vote by special ballot. I didn't have a chance to do it between finding out I would be away and having to leave, so I stopped at an Elections Canada office in a small town. I got the address in advance from the Elections Canada toll-free line, but I didn't really need it, because it was the kind of small town that has one main street where all the businesses are. The Elections Canada office was set up in an abandoned supermarket, with elections workers being trained under the Meats sign and lots of bustling going on behind partitions down at the back in front of the Dairy section. I was directed to sit down at a desk in Fruits and Vegetables, and fill out a form. it was pretty simple, just name and address, birthdate, phone number and sign to certify that I qualify to vote in Canada. Then the elections worker realized she'd given me the wrong form. I'd filled out the one for electors which to vote by special ballot inside their home riding, and I was registering to vote outside my home riding. I was then given another form to fill out. It seemed to be identical except for the title of the form. They tore up and promised to also shred the first form and then took the second completed form and went off to Deli to get me the special ballot.

This took a long time. The problem was that they didn't know the official number of my home constituency. I knew its name, but not its number, and they didn't seem to have a way of looking that up. They did find me an alphabetical list of all the candidates running for election in my riding and then spotted the voter registration card which I had brought with me. I was told by Elections Canada that I would not need it to vote by special ballot, so the only reason I had it was that I had scrawled the address of this office on it. But it also had the number of my riding on the address label, so they were able to give me an official ballot and an array of envelopes and stickers. 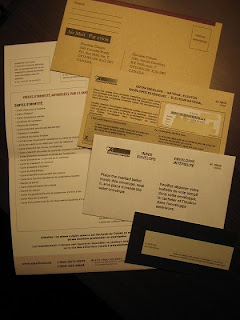 My instructions are to print the name of my chosen candidate on the ballot, then seal the ballot in the anonymous white envelope. Next I will seal the anonymous envelope in the envelope with the name and number sticker on it, and I am to sign and date that envelope. Finally I will seal the identifying envelope in the mailing envelope, put a stamp on it, and send it. I thought it odd that I require a postage stamp. There is no charge for sending mail to a member of parliament: I would think they would do the same thing for a ballot, so that they would not be symbolically charging me the price of a stamp for the right to vote. When the ballot gets to Ottawa, someone will open the outer envelope, verify that the next envelope correctly identifies someone who has the right to vote, then they will open and discard that one and the sealed ballot is now anonymous and can be opened by someone else for counting.

The ballot is a very simple, plain piece of paper for such an important purpose. Rather than having some special watermarked, official paer, they've gone for the simplest, plainest piece of newsprint you could imagine.

This is a test comment, because I haven't had any comments for over 24 hours, and that's unusual.

From the Elections Canada web site - one doesn't need ID. But at least half of the people in the riding do need ID:

You can be vouched for by an elector whose name appears on the list of electors in the same polling division and who has an acceptable piece or pieces of identification. Both will be required to make a sworn statement. An elector cannot vouch for more than one person, and the person who has been vouched for cannot vouch for another elector.

Makes you nervous doesn't it. Yesterday I didn't have any email by 10 AM, which is very unusual. It didn't take me long to find out that the hosting service that had my email servers, website, blog and another website I had just set up for a community group didn't have the level of redundancy I had believed, and what they had let the magic blue smoke out.

On top of that I just found out that the backup tool I was using recently decided to back up the software distribution files, but not the files I uploaded. Sigh.

Glad your comment dry spell isn't due to a failure, reading your blog is always a bright spot in my day, more so today.

We were all distracted by the sales at the stock market.

Regarding the required postage stamp -- I feel the same way about any mail sent to the government. The post office is its agent, after all.

More important than comments, where did your blog links go? I always come here first, then branch off into other pilot blogs, but none of them are coming up right now.

I don't know if you were being serious or not, but traffic on the blogs does seem to be down since the financial disaster emerged into the public eye. The econ and finance blogs are much more active than usual but the many bloggers and commenters in the 'sphere seem to be holding their breath. A lot of people out there are very worried and don't seem to feel like talking right now.

I won't make light of the stock market woes, but I'm not going to try to offer any words of wisdom, either. The people with extensive economics training don't know what's going on or going to happen so I, who have had 'learn some basic economics' on my to do list for years don't have a chance. Ignorance in this case is bliss. I like the way dpierce calls it a sale, though. We could go bargain shopping. I understand that's how to make money.

As for the blog list disappearance, it wasn't my doing. I manage it with an app called Blogrolling. It's supposed to star the one that have been recently updated and put them in alphabetical order for me and stuff. If the list isn't back by tonight I may put it back in the sidebar manually. I mean how hard is that?

I'm an avid reader but don't generally comment. Of course, as an American, I am woefully ignorant of happenings in our northern neighbor (and although I live in New England, I can't see Canada from here--ha ha). I think the world financial turmoil and the upcoming US elections have everyone spooked. After another comment mentioned it, I did notice blogroll is blank today. Anyway, my calendar tells me that Monday is Thanksgiving in Canada, so I'll wish Aviatrix a happy holiday.

I'm serious on both counts. Yes, I believe people are distracted by it, and it might've caused a lull in responses. And yes, it's a sale, and it should be taken advantage of.

On the other hand, it's atypical for pilot-types to succumb to transitory worry -- they either manage a problem or write it off.

Like Aviatrix, I'm no huge expert on the economic situation. But you don't need to be a forensic scientist to realize someone got shot. Whenever there's a bubble or balance upset, as we've been building for years (in the US at least), a correction will be 'a coming. A room full of PhD's couldn't tell you exactly 'when' or 'how hard', but encroachment is inevitable. Before it happens, the thing to do is to have some (liquid) money set aside for the sale. To this extent, you have some pretty common sense predictability and control. The other inevitability is that there will be a recovery.

And yes, if the department store is having a 40% off sale, and everyone is running screaming from the building, you're darned right the thing to do is to stroll in and start filling your shopping cart IF you believe in the merchandise.

If you got caught off-guard by this cycle, chalk it up to experience, learn from it, and get ready for the next cycle. Because all this will happen in different variations again (and again and again).