I do my flight planning in the morning and drop off the documents for the hotel desk to fax. The Flight Information Region department that takes our flight plans doesn't accept electronic submissions yet. Hotel breakfast is a surprisingly good omelet. It's hard to get those things cooked properly in mass production. It doesn't have as much onion or as tasty a cheese as I would have put in it, but the eggs are cooked right and it isn't too greasy. Breakfast has to last me a long time, so I'm happy when it's good. There's multigrain toast, and honey too. We have to come back to this hotel. My coworker introduces me to "Call Me Maybe" mashups while we eat. This was last summer, but yeah, I'm still a little behind the times on Internet memes. I haven't even seen anyone do the Harlem Shake yet. Knowing that it's this year's Gangnam Style seems to be enough for me.

We check out, and I pick up my faxed flight plan, checking the fax number and number of pages on the transmission record. It won't be the hotel receptionist's problem if it didn't go through correctly. We're halfway to the airport in the cab before I realize that I didn't hand in my cardkey. Does anyone collect these things? I'll send them to you. I sometimes hang onto them for the next time we go back, but some places we'll never go back. I just hate throwing away plastic. 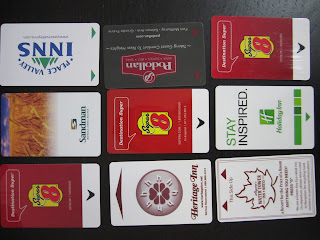 Preflight complete, I'm starting up on the apron. Oil pressure up, power to auxiliary systems, avionics on, get the ATIS, turn to ground. The controller calls me before I call him, asking me to turn my transponder to standby. Oops. I left it on. I'm spoiled by this transponder. It turns on automatically as I take off, so I don't have to select the altitude setting as I enter the runway, but because I haven't turned it on, I don't get that, "haven't turned it off" feeling. It's on the after landing checklist, of course, but I made a deliberate decision to leave it on, because I did my after landing checklist on the runway before taxiing off via runways. I always leave it on until I'm clear of all runways in the hopes that if something went terribly wrong, an aircraft about to land on top of me would receive a TCAS alert. I missed it in the final shutdown checks because it's electronic, so after the avionics master goes off, there's no dial position to show that it isn't selected off.

The controller says it was giving spurious readings now. Uh-oh. A malfunctioning transponder can ground us. He says it's probably just an artifact of start-up, that it read normally on the ILS yesterday, Heh, it's the same controller, and he remembers the dizzy chick who insisted on flying the ILS in VMC. At least I kept it on the glideslope, if he was watching me. He gives me my IFR clearance and I depart, the transponder apparently behaving now.

there must be a market for items made from recycled hotel keys, maybe aviation based.
How about a flight bag made by glueing them together? Or a knee board?

can I just apologise for the ID on that comment above. It was me, I was signed into the wrong accunt. I made that ID up to annoy Googleplus!
Sorry

I used to collect room keys from various hotels but at some point some very upscale hotels that charge quite a lot for staying with them started asking back for their ordinary plastic keycards... I'm pretty sure what I paid for a night with them covered the cost of the keys for all the hotel for a week or more, but after a few similar episodes I just got tired of arguing with them... $15 for the internet, $50 for car parking, $$$ for the room but they can't afford to lose a 10¢ (or less) keycard...

"I always leave it on until I'm clear of all runways in the hopes that if something went terribly wrong, an aircraft about to land on top of me would receive a TCAS alert."

No need to do that as most TCAS systems will not display an aircraft that it determines to be on the ground.

From the FAA Introduction to TCAS II, Version 7.1 (Google it):
"The CAS tracker also uses the difference between its own aircraft pressure altitude and radar altitude to estimate the approximate elevation of the ground above mean sea level. This ground estimation logic functions whenever own aircraft is below 1750 ft AGL. The ground level estimate is then subtracted from the pressure altitude received from each Mode C equipped nearby aircraft to determine the approximate altitude of each aircraft above the ground. If this difference is less than 360 feet, TCAS considers the reporting aircraft to be on the ground. If TCAS determines the intruder to be on the ground, it inhibits the generation of advisories against this aircraft. This methodology is shown graphically in Figure 16. A Mode S equipped aircraft is considered to be on the ground if the on-the-ground status bit contained in either the squitter or transponder reply indicates the aircraft is on the ground."

I thought today on the way home from work, "why am I still blogging? Not that many people are reading now, and I hardly look at the comments." And then some Anonymous commenter pulls out a TCAS specification to kill a long-held superstition of mine.

My first boss wouldn't let me turn the transponder to OFF exiting the runway. He thought it should 'warm down' for a bit on SBY first.

I wonder what other TCAS/transponder mythology is out there.

If it was an old style transponder with vacuum tubes, it probably needed to be switched to stby in order to "warm down" before turning it off. Newer style solid state transponders don't need no stickin' warm down time. Your first boss probably had his hand slapped by a Captain god early on in his career and was conditioned forever in such a way that would have impressed Pavlov.
Have any other "stupid-stitions", as I call them, we can help free you from?

My favourite ever was from a flight student whose previous instructor had literally convinced him that blue was red. While inspecting a fuel sample he mused out loud that it never really looked red to him. 100LL, the fuel grade almost exclusively sold today as avgas is dyed blue, as a way to check that it's the correct fuel. Many of the airplanes in use today were manufactured to use 80/87, and his previous flight instructor had convinced him that was what was in the tanks.

TCAS has been around long enough that the early equipment used vacuum tubes?

On the topic of "warming down", I believe the only situation where it's applicable is equipment using forced cooling ("a fan"). As long as the device runs, it is in an equilibrium between heat generated by the electronic parts and heat being transported away by radiation and convection. With a fan running, the convection of course works way better. The equilibrium causes the surface temperature of the internal parts and sub-assemblies to be constant.

If you turn off the device completely, including the fan, heat will still travel from the inside of a sub-assembly to its surface, while the surface is not being cooled by forced convection any more, resulting in a momentary rise of the temperature even though the original source of energy, the electric supply, has already been turned off.

This is a bit stressful to the devices and in my long, ahem..., career of fixing any piece of electronics that fails upon my family and friends, I have seen instances where devices worked fine until being turned off and failed the next time someone was trying to turn them on. Now, there are other sources of stress at the moment of turning something off, too, but I believe one or another lamp in a projector or large diode in a mains rectifier has failed because of the thermal spike once the fan stopped running.

It's actually not something related to tube equipment - it's all about forced convection with a fan. Tubes, of course, run hot (like lamps in projectors do), so this failure mechanism may be more pronounced in tube equipment using fans.

Not related to thermal failure, and for equipment using tubes, there is a somewhat unresolved debate about turning off the high voltage rail (anode supply) first, and then everything else. Some tube equipment, especially audio amplifiers, have a switch labeled "standby" that allows interrupting the anode supply while the tubes' filaments are still being powered by the main "on/off" switch. If you were using a transmitter that really used a tube for the radio-frequency amplifier, I highly doubt that a standby switch on your instrument panel would be wired directly to the high-voltage supply rail for the transmitting tube's anode.

Anyway, and in almost any circuit using tubes, the capacitors used to stiffen the anode supply will discharge much faster than the filaments would cool down, so even when you turn off a tube circuit all at once, the anode voltage will be down long before the cathodes are cold.

Now, if you ask what a standby switch in a tube circuit is good for after all: A tube won't age much when it is heated without the anode being turned on. The standby switch allows you to leave the filaments hot and ready for instant use while turning off the anode supply will keep the rest of the circuit quiet and unpowered.